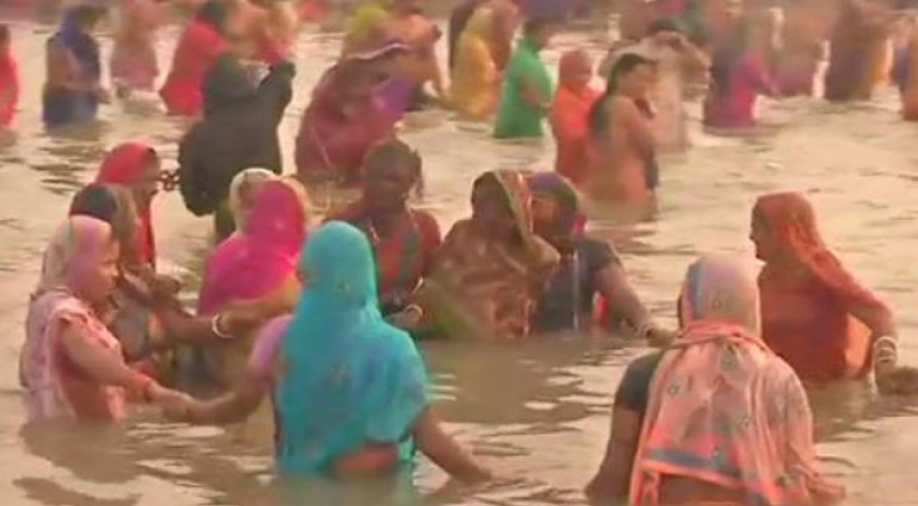 Devotees taking a holy dip at Ganga Sagar on the occasion of Makar Sankranti in Prayagraj. Photograph:( ANI )

Scores of devotees from across the country took a holy dip at Sangam Ghat on the occasion of Makar Sankranti in Kumbh Mela in Prayagraj on Monday.

Makara Sankranti or Maghi, is a festival day in the Hindu calendar, in reference to deity Surya.

The day marks the first day of sun's transit into the Makara, marking the end of the month with the winter solstice and the start of longer days.

In the wake of Kumbh Mela, the local police is keeping a strong vigil and monitoring the regions adjoining the banks of river Ganga and its tributaries.

They have also restricted vehicular movement in Prayagraj roads due to a large footfall of tourists.

Moreover, the administration has taken the help of Non-Government Organisations (NGO's) and citizens in maintaining law and order.

"As per the order by the Director General of Police (DGP) to all the senior police officials in all the districts, it has been instructed to ensure that any sort of illegal industrial activity or waste should not be discharged into the Ganges and its tributaries including the Yamuna," Praveen Kumar, Inspector General (Law & Order), Uttar-Pradesh Police had stated on January 10.

Kumbh is the largest human congregation in the world, with lakhs of pilgrims participating in the festival with the belief that taking a dip in the holy water of Ganges River will pave the way for their salvation and would rid them of their sins.