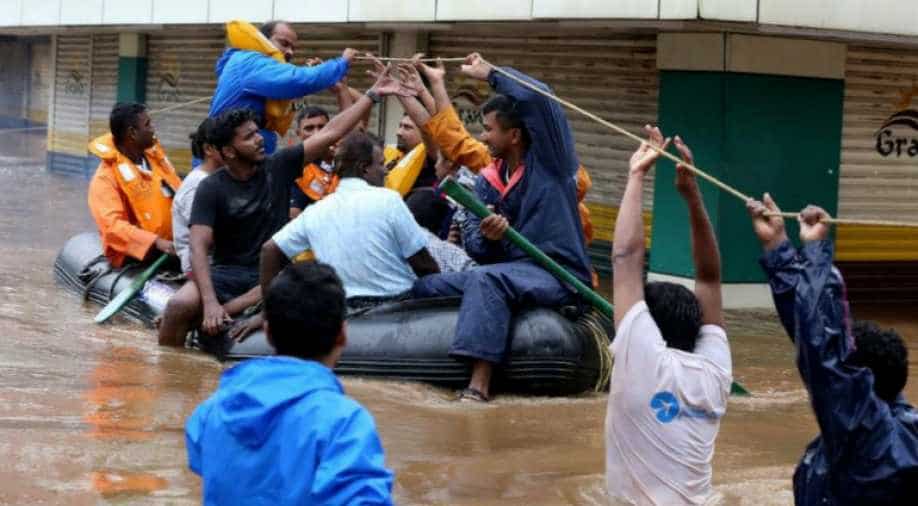 The worst floods in a century in Kerala have killed 324 people and forced more than 200,000 into relief camps, officials said on Friday, with the toll expected to rise as heavy rain pushes water levels higher still.

As the southwestern coastal state's chief minister sought military reinforcements to boost rescue efforts, a disaster management official said that, since the monsoon season started about three months ago, more than 324 people had died due to flooding and landslides.

As the waters have risen, many people have found it increasingly hard to access food and other basic amenities, or to reach safety.

"In some areas, airlifting is the only option... thousands are still marooned," Chief Minister Pinarayi Vijayan said.

Vijayan said he was hoping the military could step up its support for rescuers already using dozens of helicopters and hundreds of boats.

"I spoke to the defence minister this morning and asked for more helicopters," he told a news conference in the state capital, Thiruvananthapuram, adding that he planned to send 11 more helicopters to the worst-hit areas.

During the current monsoon, Kerala has been hit with over a third more rain than average, according to the weather office. Vijayan said the floods were the worst in a century.

Further heavy rainfall has been forecast for most parts of the state on Saturday, and authorities said they planned to implement controlled releases of water from dams to manage flows and minimise damage.

Rains are expected to subside to "light to moderate" levels on Sunday, weather office said. (People wait for aid on the roof of their house at a flooded area. Courtesy: Reuters) (People are airlifted by the Indian Navy soldiers during a rescue operation at a flooded area. Courtesy: Reuters) A Reuters witness in a relief helicopter in Chengannur, a town in Kerala, saw people stranded on rooftops and waving desperately for help.

"The town looked like an island dotted with houses and cars submerged in muddy flood waters and downed coconut trees," he said.

Two circling navy helicopters dropped food and water in metal baskets and airlifted out at least four people, including a three-year-old child.

Anil Vasudevan, the head of the Kerala health disaster response wing, said his department had geared up to meet victims' needs.

"We've deployed adequate doctors and staff and provided all essential medicines in the relief camps," he said.

His teams were also making arrangements to minimise the risk of people contracting water-borne diseases once they return home after the floodwaters subside.

The rains have also disrupted transport networks in Kerala, a major destination for domestic and foreign tourists.

The flooded airport in the main commercial city Kochi has suspended operations until August 26, and rail and road traffic has been interrupted in many places.

"Water levels continue to overflow on tracks and surpassing the danger level of bridges at different places," Southern Railway said in a statement, adding it had cancelled more than a dozen trains.

Some crops have also been inundated. The state is a major producer of rubber, tea, coffee and spices such as black pepper and cardamom.

Prime Minister Narendra Modi has arrived in Kerala late night on Friday. He would be taking stock of the relief and rescue operation.