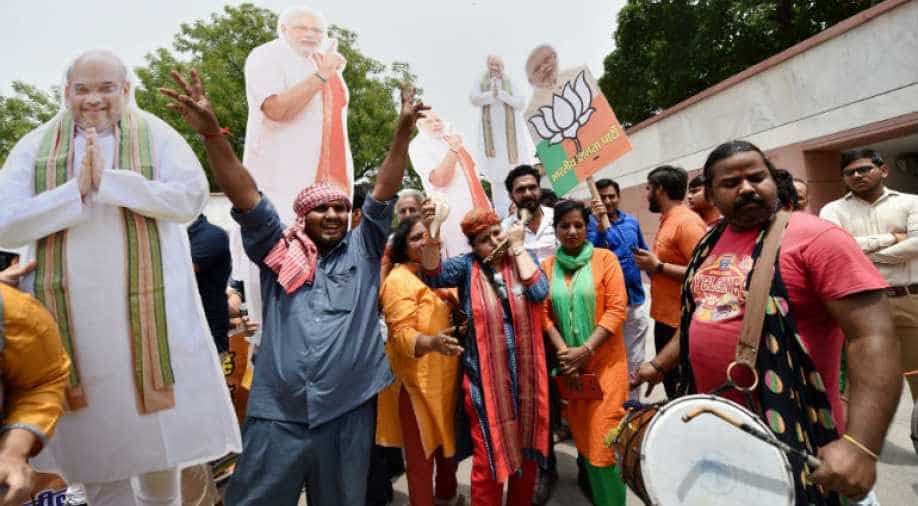 Six hours into counting and the results are self-evident. Prime Minister Modi's campaign form in the last leg of elections has delivered Karnataka to the BJP, it was what saved the party in Gujarat - a political equivalent of slog-over pinch hitting that Dhoni, Kohli and some of the other best finishers in cricket would envy and want to emulate.

Like it or lump it, when you want a 'neta' to deliver and lead the party on the campaign trail, there is no one better than the indefatigable PM who has delivered state after state for the Bharatiya Janata Party.

A beaming Union minister Ravi Shankar Prasad did the rounds of TV studios and said on air: "Democracy and accountability go hand-in-hand and the Congress president should look at his own party. The country has accepted Narendra Modi's leadership. It is not the BJP's job to strengthen the party, they have to see why the people didn't vote for them."

Modi had on the campaign trail quipped that the Congress will be reduced to 'PPP' party - alluding to the fact that all the party has are the states of Puducherry, Punjab and Parivaar (then Gandhi family). Perhaps the M from Mizoram did not fit the pun - but it is a fact that after its loss in Karnataka, the Congress has its governments in just the three states of Punjab, Puducherry and Mizoram - tracts of land on which just under three per cent of India's population dwell.

Wave after wave of pollsters said there was no 'Modi ki lehar' (Modi wave) visible in the state but everyone forgot Uttar Pradesh. No 'visible' BJP wave led to 300+ seats there. Of course you sometimes need the right political prism to see a wave and many on the other side of the divide, naysayers and even fence sitters of my ilk, can sometimes miss what stares them in plain sight.

Faced with the chief minister in Siddaramaiah who wasn't a pushover, the BJP pinned its hopes largely on the central government's track record and Prime Minister Modi's charisma to get them out of a tough spot. On Saturday, exit polls were divided and sensible pollsters said it was too close to call. The BJP top-brass seemed quietly confident, the Congress claimed victory is what now seems like braggadocio. Dismissing the exit polls as 'entertainment', BJP's chief ministerial candidate B S Yeddyurappa had even announced that he would take oath on May 17.

What the Congress missed was also the fact that a popular chief minister may not combat anti-incumbency - the performance of the MLAs matters. And while these results may not have a direct fallout in the PM Modi's 2019 bid for a second-term in office, the prime minister is clearly a captain who leads from the front and comes up with the goods when the going gets tough - a trait that augurs well for the BJP as it will look to buck anti-incumbency and retain Rajasthan, Madhya Pradesh and Chhatisgarh later this year.