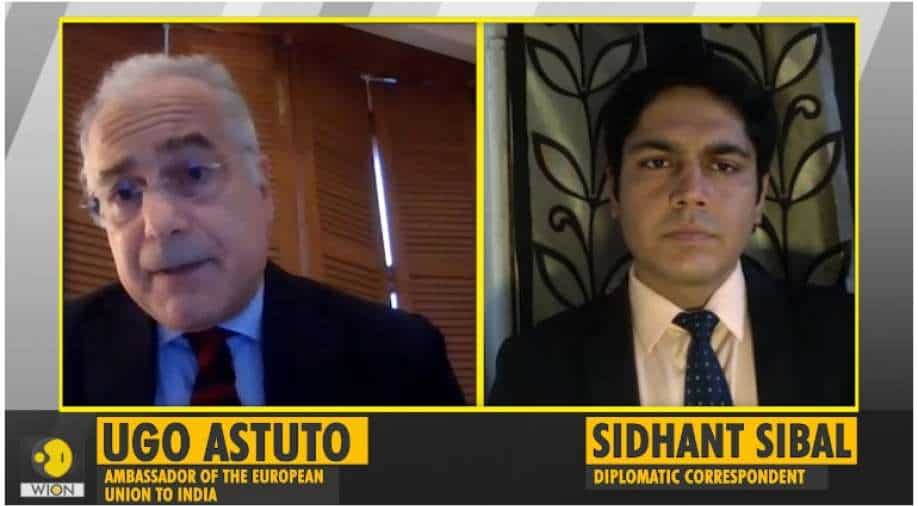 "Team Europe is coming together to offer its support to India in its difficult moment, just like India supported the rest of the world for the past few months exporting vaccines worldwide," said Astuto.

He lauded India's outreach on vaccines earlier this year, saying, "India has actually led the way in donating vaccines in the region and beyond and setting examples of what global solidarity means".

Here is the full interview.

WION: How is EU assisting India in dealing with the crisis?

Ambassador Ugo Astuto: The European Union as a team Europe is coming together to offer its support to India in its difficult moment, just like India supported the rest of the world for the past few months exporting vaccines worldwide.

Through this mechanism we can coordinate the response and we can also help in logistics and transport. The response has been very substantial, indeed. Last night we had deliveries from Romania and Ireland landing in Delhi. From Dublin, we had 700 Oxygen concentrators being brought in, one Oxygen generator, 365 ventilators.
From Bucharest, 80 Oxygen concentrators and 75 Oxygen cylinders.

We expect on Sunday, another plane to land from Belgium and bring in 9000 doses of antiviral medicine Remdesivir.

As we speak, other member states are joining in.

Just to give you an idea,

WION: India needs tankers for Oxygen and other related stuff, how is the EU helping? Also, any support for vaccines? India is trying to get vaccines from other countries?

From the list, I read earlier, you will read most of the supplies being delivered now are about Oxygen and Oxygen related material, ventilators and antiviral medicines, following the contacts with the Indian authorities.

WION: How has the EU in the past assisted the world community in dealing with such a crisis--with a focus on Covid?

Ambassador Ugo Astuto: Yes, this mechanism, the European Civil Protection Mechanism, is made precisely for that, to face and address the emergency situation in Europe and beyond and it has been activated a number of times, since its inception.

When it comes specifically to Covid infection, from the outset European Union just like India has been on the path of global cooperation in the fight against the Pandemic, and Covid 19 has shown this sort of crisis knows no border.

An effective response requires global co-operation and mutual support. We are facing this epidemic together and we will only get out of it together. That is why we have launched a team Europe approach when it comes to Covid.

We have provided medical equipment and medicines to a number of partners around the world, particularly low-income countries in Africa for a total of almost 38.5 billion Euros. On vaccines, specifically, European Union is committed that everyone who needs vaccines gets it, irrespective of where he or she lives. That is why European Union and its member states are leading voices in the establishment of this COVAX facility, I am sure you are familiar with it.

COVAX is a facility in order to supply vaccines to those who need them. Team Europe, European Union's member states, European Investment Bank together are among the largest donors to this facility. I don't have to remind, that India is playing a key role in the COVAX facility in the manufacturing of vaccines which has then been exported.

India has actually led the way in donating vaccines in the region and beyond and setting examples of what global solidarity means. Clearly, this is also contingent on domestic needs. It is true for India, it's true for the EU as well. The initial assumption is we want to be open to the needs of the global community. For the European Union, for instance, almost as many vaccines which has been injected into EU citizens have been exported so far. Between January and April, more than 110 million doses of vaccines have been exported from the European Union to more than 40 countries. This is another area where the EU and India have been working based on the same human-centric values.

WION: The India, EU leaders virtual summit will take place on 8th May. What will be the key focus at the summit?

Ambassador Ugo Astuto: The latest meeting is happening in the backdrop of the global health crisis, so the reaction to the Covid crisis will obviously be paramount. But, besides that, the strategic partnership between European Union and India has been growing vigorously in the last couple of years.

At the last summit, in July 2020 we decided to further broaden the scope and areas of cooperation. We want to defend multilateralism, combat climate change, to foster the greening of our economic models. We want to undertake digital transition in a manner that is consistent with our democratic values.

We want to foster connectivity to cooperate on political and security issues. So we set up what we call a road up to 2025, guiding us. The next summit, I am sure will inject further momentum into all these topics of interest.

For instance, we are working now on preparing a new India connectivity partnership because we share the same principles that underpin--we want connectivity to be environmentally, socially, and physically sustainable. We both recognize the role of the private sector. We want to give the right incentive to come in and build infrastructure in a sustainable manner, in a transparent, inclusive, and rules-based manner.

So I think, on these things EU and India are natural partners, for bringing forward the development of a shared vision of connectivity. Another major priority I have to mention is the fight against climate change, in the run-up to COP26 which will take place in Glasgow, India has achieved a very significant result to the greening of its economic model, particularly on renewables--investment in solar has been very impressive with significant result.

I believe India is a trendsetter. So much scope for exchanging experiences. Science tells us, as an international community we all need to work together and be ambitious, we want to address the existential issue of climate change, temperatures are still rising, we need to act now for the sake of future generations and we need to make Glasgow a success. Here I think the EU and India have much scope to work together to make Glasgow a success and other priorities I would like to highlight the digital transition. As open societies and democracies, the EU and India can work together to make sure that the digital transition takes place in a secure place, fostering innovation and competition but also full respect to individual rights and freedom.

Issues such as data protection, experience with GDPR, or security of networks, all these are relevant issues. Naming a few, there are many other topics like trade and investment, research innovation, there are so many. Lots of cooperation between India and the EU.

WION: EU is pushing India on net neutrality. What has the EU offering for achieving it? Technology? Finance? How can a country like India develop a roadmap without clarity on technology and finance?

Ambassador Ugo Astuto: What we trying to do in Europe is to develop a model for digital transition which is underpinned by democratic values and which meets the need of the citizen. It must be human-centric, it's not the platforms, it's not about the needs of the state, it's mostly about citizens and its needs.

That is why we are undertaking the digital transition because we want to make the lives of citizens easier. We want to protect freedom of expression, offline and online. I think, in this respect the challenge we face as the European Union is very similar to the challenges which India faces. We both are democracies and open societies and I believe that we are facing the same issues and in all likelihood, we can work together to foster convergences when it comes to the regulatory framework.

Now the basic starting point is the European Union is a stakeholder when it comes to the prosperity and stability of the Indo-Pacific.

Indo-Pacific is a region that has tremendous importance for the world, its a center of economic development, its a center of innovation, in a large part, the very future of the world will be decided in the Indo-Pacific.
European Union has an important stake, and we want to offer a contribution. A contribution which is underpinned by our strong belief in multilateralism, in a cooperative approach to international relations, respect for International Law, including The Law of the Seas.

These principles, bring us naturally close to India and its own endeavor to make the Indo pacific region of peace and prosperity. I think the council conclusion and the strategy will help us in identifying additional common converging interest in the region against the risk of instability and in order to foster our common view of a prosperous future for the region.

WION: How do you see the situation in Afghanistan? How EU and India can play a vital role?

Ambassador Ugo Astuto: You see, India and the EU have a natural convergence of view when it comes to Afghanistan because our major point is gains of the last 20 years, are not lost, in terms of democratic rights, human rights, women's rights.

We want a peace process that is Afghan-led, Afghan-owned, this is our priority and we have no other interest-- the prosperity, and welfare of Afghanistan.

We are following developments with this in mind that the framework, the democratic rights, the gains of in terms of rights of women and girls which have been gained in past few years are preserved and are not lost and that road to peace, its a road which is also consolidating the present democratic rights.