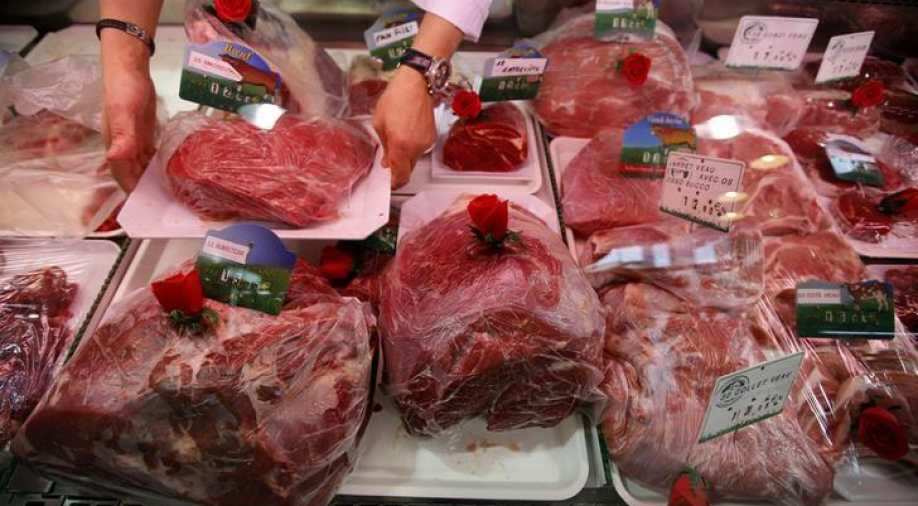 File photo: A butcher arranges pieces of meat at his shop in Marseille, France. Photograph:( Reuters )

Without giving country-specific figures, it said the findings will be increasingly important given the projected demand for meat from emerging middle classes.

Switching from beef to other protein sources can prevent millions of diet-related deaths globally and drastically reduce greenhouse gas emissions, though overall consumption of meat and fish is expected to rise rapidly in countries like India, a new study said Thursday.

The new research, done by the Oxford Martin School for the World Economic Forum (WEF), found that balancing meat consumption with alternative sources of protein can lead to significant health and environmental benefits.

It also found a sustainable food industry and healthier human life can be achieved through further innovation in the development of alternative proteins, livestock production and consumer behaviour, Geneva-based WEF said.

For human health, the research found that switching from beef - the base case of the analysis - to other protein sources could reduce the overall global burden of diet-related deaths by 2.4 per cent, with the number climbing to 5 per cent in high- and upper-middle-income countries.

The report is expected to be discussed at the WEF's annual meeting later this month in Davos, which would be attended by thousands of business, government and civil society leaders from across the world, including from India.

Without giving country-specific figures, it said the findings will be increasingly important given the projected demand for meat from emerging middle classes.

In terms of environmental impact, the study said production of beef alone was responsible for 25 per cent of all food-related greenhouse gas emissions. With demand for protein set to soar, such demand will place huge pressure on the environment.

The report said beef has an emissions intensity of 23.9 kilograms of CO2 equivalent per 200kcal, while beans, insects, wheat and nuts emit 1kilogram or less CO2 equivalent for the same nutritional value. Other sources such as tofu, pork, alga and chicken produce only 3-6 kilograms CO2 equivalent.

The 13 sources of protein analysed in the report included beef, pork and chicken; fruits and vegetables that can be eaten naturally or processed, such as beans and peas; processed non-animal substitutes such as tofu, wheat-gluten products or mycoprotein; and novel products such as cultured meat, insects and alga spirulina.

The WEF's Managing Director Dominic Waughray said it will be impossible to sustainably satisfy the world's future demand for meat.

However, it can be possible to produce enough nutrition for 10 billion people and improve people's health without necessarily giving up meat - even red meat - altogether, through innovation in products, improvements in how we produce beef, pork and chicken, and an effort on the part of the consumer to embrace a more diverse diet, Waughray added.

Citing the OECD-FAO figures, the report said growth in per-capita consumption of meat and fish within Asia between 2018 and 2027 will be highest in India (12 per cent) and China (13 per cent).

During the same period, the total consumption of meat and fish will grow by 25 per cent in India and by 16 per cent in China.

On the other hand, demand for livestock-derived foods is projected to grow rapidly in China with an increased focus on meat, while in India it will be slower with a high concentration on milk.

The study also said a variety of factors will lead to a different development of supportive and cautionary narratives about alternative proteins in Asia compared with Europe and North America.

Among the four key factors, the study listed some countries such as India has a long cultural history of religious vegetarianism.

"In these countries, abstinence from meat has an association with tradition and conservatism, which contrasts with its association with liberalism and the counterculture in the West," it said.

The WEF said the government and regulators need to design rules to govern a wave of new alternative proteins to protect the public from health risks and unsubstantiated claims and to support the various sectors in their transformations.