Four militants killed in encounters in J&K's Pulwama and Baramulla​ 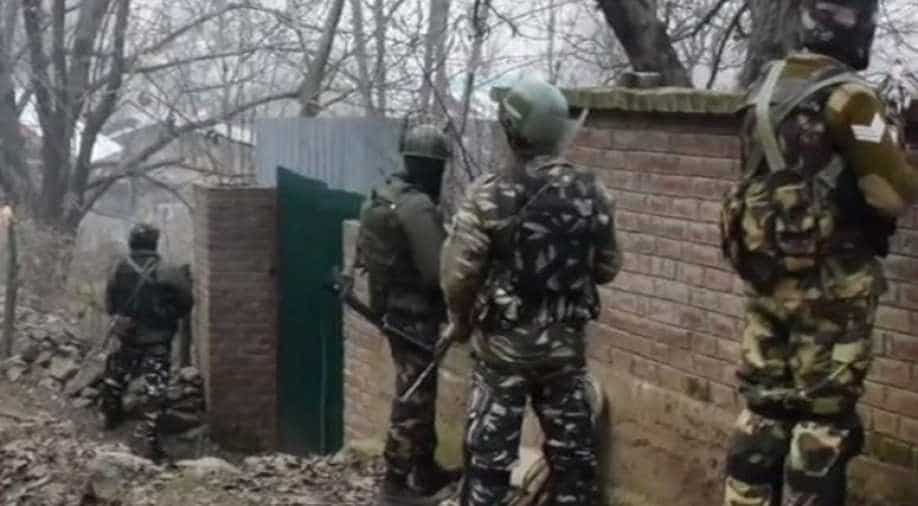 Three Hizbul Mujahideen militants including the one belonging to a group of ultras who were involved in the killing of Army jawan Aurangzeb last year were gunned down in a pre-dawn op.

Four militants were gunned down in two separate encounters in Pulwama and Baramulla districts of Jammu and Kashmir on Saturday, police said.

While three Hizbul Mujahideen (HM) militants, including the one belonging to a group of ultras who were involved in the killing of Army jawan Aurangzeb last year, were gunned down in a pre-dawn operation by security forces in Pulwama district of south Kashmir, another militant, belonging to Jaish-e-Mohammad (JeM), was killed in Sopore town of Baramulla, a police spokesman said.

He said based on credible input a cordon and search operation was launched by the police and security forces in the pre-dawn hours on Saturday in Panzgam area of Awantipora in south Kashmir's Pulwama district.

During the search operation, the hiding militants fired on the search party of the forces, who retaliated, leading to an encounter, he said.

In the ensuing encounter, the spokesman said, three militants were killed and the bodies were retrieved from the site.

He said the slain militants have been identified as Showkat Dar of Panzgam Awantipora, Irfan War of Wadoora Payeen Sopore and Muzaffar Sheikh of Tahab Pulwama.

"All three killed terrorists, according to police records, were affiliated with proscribed terror outfit HM.

They were wanted by law for their complicity in a series of terror crimes including attack on security establishments and civilian atrocities. Several terror crime cases were registered against them," he said.

As per police records, the spokesman said, Dar had a long history of terror crime records.

Aurangzeb was abducted and later killed by militants in Pulwama in June last year, while he was on his way home in Poonch to celebrate Eid.

The spokesman said War was part of terror groups responsible for conspiring and executing attacks on security establishments and civilian atrocities in the area.

Incriminating materials including arms and ammunition were recovered from the site of encounter, the spokesman said, adding police have registered a case and all these materials have been taken in the case records for the purpose of investigation and to probe their complicity in other terror crimes.

The spokesman said with the efforts of police and security forces, it was a clean operation and no collateral damage took place during the exchange of fire.

In another anti-militancy operation, the spokesman said, a cordon and search operation was launched by security forces in Hathlangoo area of Sopore in north Kashmir's Baramulla district.

During the search operation, militants fired on the forces, triggering an encounter in which one militant was killed, he said.

The body of the slain militant was retrieved from the site and he has been identified as Waseem Ahmad Naikoo of Barsoo Awantipora, the spokesman said.

He said according to the police records, Naikoo had joined the proscribed terror outfit JeM after he went missing from his home in February this year.

Police have registered a case in this regard and further investigation in the matter is in progress, the spokesman said.