Farmers call for bandh in Karnataka over Mahadayi water dispute 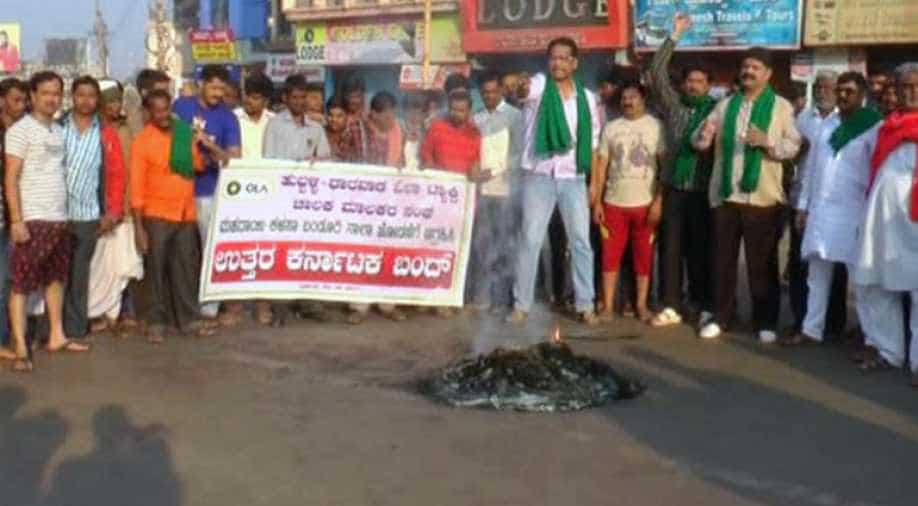 While the river originates from Karnataka, a major part of it flows in Goa. Photograph:( ANI )

Farmers in North of Karnataka called for a shutdown over the Mahadayi water issue.

Places like Gadag, Dharwad, Bagalkot, Hubballi, Bailahongala and neighbouring areas have been affected by the protest.

Following the agitation, the transport services between Karnataka and Goa have been closed.

Protestors expressing their dissatisfaction over the resolution of the water row demanded the Kalasa-Banduri project.

The project involves building barrages across Kalsa and Banduri to divert 7.56 tmc ft water to Malaprabha which meets drinking water needs of the north of Karnataka region.

The state of Karnataka and Goa are in dispute on the issue of sharing inter-state Mahadayi river water.

While the river originates from Karnataka, a major part of it flows in Goa.

Karnataka is seeking the release of 7.56 tmc ft water for the Kalasa-Banduri Nala project.

The protestors raised anti-government slogans and effigies were also burnt.

The protest is being led by Mahadayi Kalasa Banduri Nala Horata Samanvaya Samiti, getting support from several pro-Kannada groups and other organisations.

Earlier, a petition filed by Karnataka government was rejected by Mahadayi Water Disputes Tribunal on grounds of the project may cause ecological damage.

A meeting was called by Karnataka Chief Minister Siddarmaiah with his Maharashtra and Goa counterparts Devendra Fadnavis and Manohar Parrikar respectively "to arrive at a negotiated settlement" over the issue.