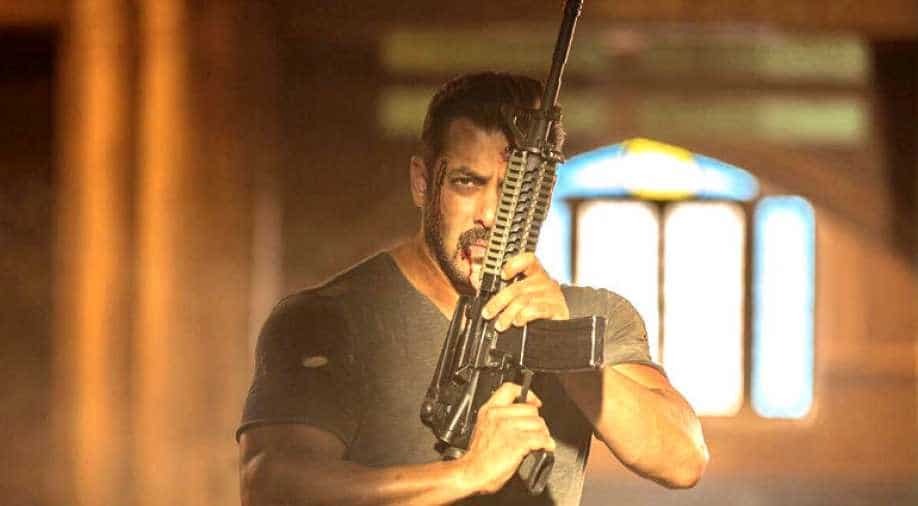 Tiger Zinda Hai could easily be called a superhero film. Because no RAW agent can do the things that Salman Khan does on screen, scene after scene. He battles a pack of wolves, comes out unscathed from bomb blasts, fights 100 odd ISIS soldiers alone and survives air strikes. And this - when he has been 'resting' for the past 8 years. I shudder to think what would Tiger be if he was still an active spy!

Ali Abbas Zafar takes up Kabir Khan's Ek Tha Tiger to make a sequel which defies logic and science and serves Salman Khan - the superhero- on a platter to his fans. At the beginning, the filmmaker conveniently states that the story is based on a real-life incident but has taken cinematic liberties. And boy, does he remain true to his words or what!

The poster of the film (Others)

What is the story, you ask? A group of Indian and Pakistani nurses is held hostage inside a hospital by an extremist group in Iraq. The head of the group is injured and is being treated inside the hospital by the captive nurses. As America plans an air strike over the entire hospital and kill the dreaded terrorist and his army in one go- Indian Intelligence has to rescue the nurses out of the hospital before the strike. They have limited time and the risk of entering the area is high so they contact Tiger(Salman Khan), a special agent with RAW, who has now retired and disappeared into oblivion. Tiger is summoned from Austria- where he now lives with his wife Zoya (Katrina Kaif), a former Pakistani spy, and their son. Not much is known as to what the couple does for a living apart from sending each other on snow capped mountains and empty streets. Oh yes, Tiger goes on shikar often with their little son and practice arm wrestling by fighting a pack of wolves.  He also fixes old tattered radios so that he can hear a few desi songs in far away land while his wife, much in love, nags him for not doing household chores.

Anyway, when duty calls- Tiger is almost immediately convinced to take up the assignment and takes his favourite men on board- a sniper, a bomb defusing expert and a hacker. The time is ticking and Tiger has to evacuate the nurses before America goes out all guns blazing. In the middle of the mission, his wife Zoya joins him with two ISI agents and RAW and ISI (yep, that's exactly what is shown) together fight for world peace.

Written by Ali Abbas Zafar and Neelesh Mishra, the film rides on the current wave of nationalism that has engulfed our country. But at the same time does not spew venom at the neighbour- instead talks about aman and shanti for both the countries. There are dialogues that have been written to cater to the audience and their sentiments. It's like the writers knew that this particular dialogue would get loud cheers and whistles inside the theater. And who better to deliver such odiously dramatic lines than Salman himself.

With a dead-pan expression that lasts more or less throughout the film, Salman plays his role with much ease. It's a film that promotes his many talents, one that involves flexing muscles- and the writers make him the center of everything literally and choreograph mind-numbing, illogical scenes that only the superstar can pull off. Katrina, on the other hand, takes a backseat and lets Salman hog all the attention. She is there, occasionally kicking a few butts here and there- but the story is so Salman centric that Katrina's absence near the climax is not noticed.

A still from the film (Others)

It's surprising to see a film that is so away from logic feature actors like Girish Karnad and Kumud Mishra. Both known for their talent, fade in this thriller that is concentrating solely on promoting Salman's talents. There is also Angad Bedi, Anant Sharma, new actor Paresh Pahuja, and a screeching Paresh Rawal - who have only a few scenes where they show their acting prowess. Among the supporting cast, it is Sajjad Delfrooz as the dreaded terrorist and Pahuja who show a spark. I'd look out for these two actors in other films.

It's not a bad film, though. It just oversimplifies a lot of things. What is admirable is the fact the scale at which its mounted is huge and the director ensures that the thrills are in plenty. The action scenes are slick and well-designed.

If we have to create a scale based on Salman's recent films- with Bajrangi Bhaijaan being his best and Prem Ratan Dhan Payo being his worst, Tiger Zinda Hai falls somewhere in the middle.

Will it appeal to people, despite the flaws? Yes of course, because accepting and loving such illogical films is 'apne culture ki aadat'.