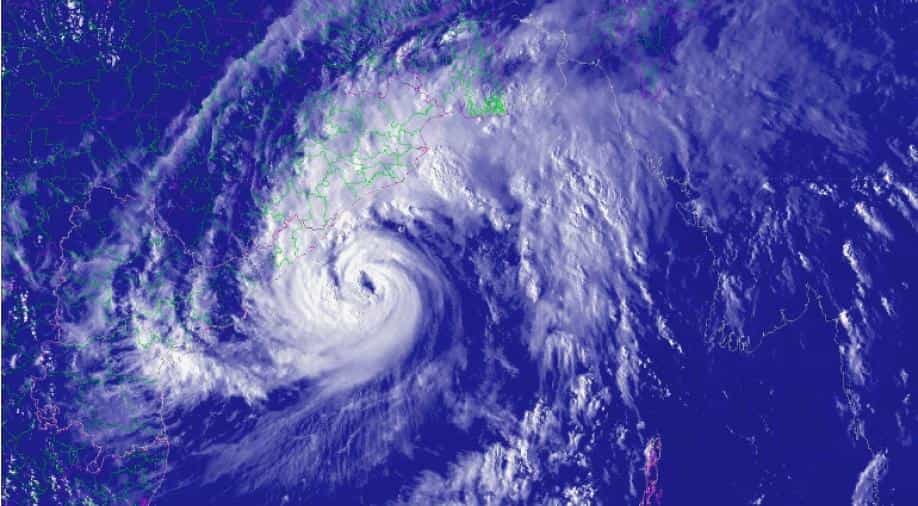 The cyclone and the accompanying heavy rain have wrought damage in Bengal's Jhargram and Paschim Medinipur districts adjoining Odisha. It left one person dead in

Cyclone Titli weakened into a deep depression and entered West Bengal Friday, triggering incessant rainfall even as it claimed four lives - three in Odisha and one in Bengal.

The cyclone and the accompanying heavy rain have wrought damage in Bengal's Jhargram and Paschim Medinipur districts adjoining Odisha. It left one person dead in

The MeT department warned of heavy to very heavy rainfall in Gangetic West Bengal till Saturday, ahead of Durga Puja festivities. It said the cyclone has weakened into a deep depression and is moving northeast.

The weatherman said the deep depression is likely to cause heavy to very heavy rain in North and South 24 Parganas, Purba and Paschim Medinipur, Jhargram, Purba Bardhaman, Howrah and Hooghly districts.

Fishermen have been advised not to venture into the sea along and off the coasts of West Bengal and Odisha, deep sea areas of North and Central Bay of Bengal till Saturday.

Tourists at Digha and other adjacent sea-side resorts have been advised not to get into any sea-bound activities till Saturday as squall with speed of 45 to 55 kmph, gusting to 65 kmph will prevail along and off the coasts of West Bengal and Odisha.

In Odisha, the toll in the natural calamity rose to three after two bodies were recovered in Ganjam district, near where it made its landfall, as the state government deployed NDRF and ODRAF personnel to speed up rescue and relief operations.

One of the two bodies was that of a 40-year-old fisherman from Vizianagaram in Andhra Pradesh, police said.

The other body is that of a 45-year-old man of Bhuta Pankal village under Sorada block in Ganjam district.

On Thursday, the body of an eight-year-old boy, who had slipped into a canal at Saradhapur village under Hinjili police station, was found by locals, police said.

In Andhra Pradesh, eight lives were snuffed out by the storm on Thursday.

The Odisha government is, however, yet to confirm the deaths.

"We have seen media reports of the deaths of two or three persons in districts. We are verifying it," Chief Secretary A P Padhi told scribes on the human casualty due to Cyclone Titli.

The state deployed NDRF and ODRAF personnel Friday to speed up rescue and relief operation mainly in the southern districts of Ganjam, Gajapati and Rayagada where more than 60 lakh people were affected by flood due to heavy rainfall triggered by the cyclone.

The flood situation in three districts, which received the highest rainfall for three days under the impact of Cyclone Titli, is grim as the water levels in major rivers like Rushikulya and Bansadhara have crossed their danger marks, official sources said.

The decision to step up relief and rescue operation was taken at a high-level meeting where Chief Minister Naveen Patnaik took stock of the situation.

In a video conference with the district collectors of Ganjam, Gajapati and Rayagada, Patnaik gave instructions for intensifying rescue and relief operation on a war footing as people faced the twin calamities of cyclone and floods.

Patnaik stressed on quick repair of breaches in several river embankments and directed district collectors to provide cooked food to people evacuated from their homes.

He constituted a three-member ministerial committee to visit the three worst-affected districts to monitor rescue and relief operation.

Two helicopters were requisitioned from the Indian Navy mainly for rescue and air dropping of relief materials in Ganjam district as its villages are cut off due to the submergence of roads with rain and flood waters, Padhi said.

Low-lying areas in Cuttack, Bhubaneswar and the pilgrim town of Puri were also waterlogged due to rains.

Train services were affected by the cyclone and floods and at least 16 trains were cancelled and several others rescheduled by East Coast Railway (ECoR) on Friday due to submergence of railway tracks, an ECoR official said.

Director of Bhubaneswar meteorological centre, H R Biswas said heavy to very heavy rainfall will continue to pound parts of the state, including Balasore, Bhadrak and Dhenkanal districts, till Saturday.