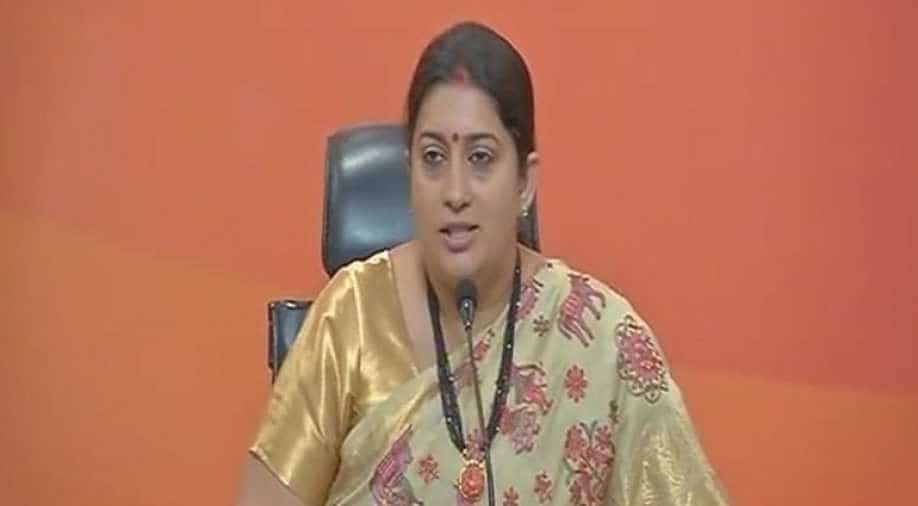 A controversy had erupted after Irani said at an event in Mumbai Tuesday that women had a right to pray but 'not desecrate' places of worship.

A complaint was lodged at a Sitamarhi court on Thursday against Union minister Smriti Irani for her alleged remarks on allowing women of menstruating age into the Sabarimala temple in Kerala.

A controversy had erupted after Irani said at an event in Mumbai Tuesday that women had a right to pray but "not desecrate" places of worship.

Hours later, she tweeted that she made "2 factual statements" and "rest of the propaganda/agenda" was launched using her as a "bait".

The complaint was lodged before the court of Chief Judicial Magistrate, Sitamarhi, Saroj Kumari by advocate Thakur Chandan Singh.

Thakur Chandan Singh has made protesters against entry of women into the shrine as party in the case.

On September 28, the Supreme Court lifted the ban on entry of women of menstrual age into the Sabarimala temple. However, women were stopped by protesters from climbing up the hill top shrine.

The complaint has been lodged under Sections 120B (criminal conspiracy to commit offence punishable with death), 124A (sedition), 353 (deterring public servant from discharge of duty) and 354 (outraging the modesty of a woman) of the Indian Penal Code.

The matter is likely to come up for hearing on October 29.