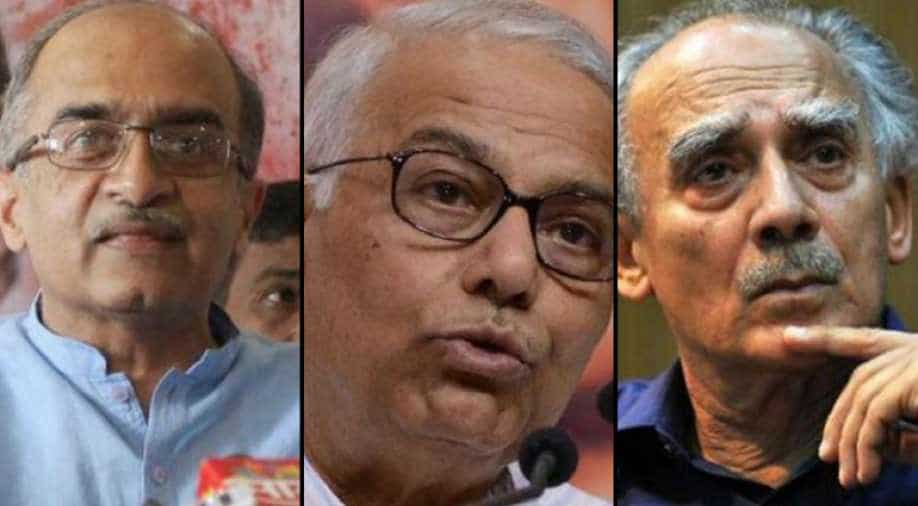 The Rafale deal is a case of "monumental criminal misconduct" by the NDA government and the scam involving it is much bigger than the Bofors scandal, former Union ministers Yashwant Sinha and Arun Shourie alleged on Wednesday, demanding a time-bound probe into the contract by national auditor CAG.

In a tweet, Defence Minister Nirmala Sitharaman rejected the charges as "baseless", asserting that the government had already responded to the allegations on the floor of Parliament. She said a recent attempt in Parliament to malign the government through baseless charges had collapsed.

Sinha and Shourie, addressing a press conference along with lawyer-activist Prashant Bhushan, raised a number of questions over the Rs 58,000 crore deal for procurement of 36 Rafale fighter jets from France. Both Shourie and Sinha have served in the previous BJP-led government at the Centre.

The trio, known as strong critics of the NDA government, also accused Prime Minister Narendra Modi of single-handedly changing the parameters of the deal and that there was gross violation of mandatory procedures in finalising the contract.

The entire deal was a "textbook case of criminal misconduct, of misuse of public office and of enriching parties at the expense of the national interest and national security", they alleged, adding there was an "effort" by the government to "conceal" facts.

The Congress has been accusing massive irregularities in the Rafale deal, alleging that the government was procuring each aircraft at a cost of over Rs 1,670 crore as against Rs 526 crore finalised by the UPA government for the procurement of 126 Rafale jets. The deal negotiated by the UPA could not be inked.

The trio also rejected government's contention that the prices of the aircraft have gone up due to India-specific add-ons and weapons systems, citing a joint statement by India and France during Prime Minister Modi's visit to Paris in 2015.

They said the joint statement mentioned that the aircraft and the associated systems and weapons would be delivered to India on the same configuration as had been tested and approved by Indian Air Force for the deal negotiated for procurement of 126 jets under the UPA government.

Shourie alleged that there had been "gross misuse of office" by which the original project for the acquisition of 126 fighter aircraft had been "sabotaged".

"I can tell you, as a person who handled the matter with regards to Bofors, that Bofors was absolutely nothing compared to this (Rafale scam). There was never a sudden change (in the deal) like this in which you suddenly give up the entire project," the former minister in the Atal Behari Vajpayee government said.

The Congress has also been pressing for price details of the deal but the NDA government has refused to divulge them citing confidentiality provisions of a 2008 Indo-France pact. The government has asserted that there were no irregularities in the deal.

"I would suggest, on our behalf, that the audit which Comptroller and Auditor General was supposed to take up, that should be a forensic audit and it should be completed within three months," said Sinha, adding "It is a huge scam. Bofors pales into insignificance before this scam."

The Bofors scandal involving procurement of howitzer guns in late 1980s had rocked the then Rajiv Gandhi government.

Terming the Rafale deal as the "biggest defence scam" that this country has seen so far, Bhushan alleged that it involved a loss of at least 35,000 crore to the public exchequer.

The trio said the ever-shifting statements of the ministers of defence, invoking of secrecy clauses in the contract and the inexplicable dropping of the Hindustan Aeronautics Ltd (HAL), from the project were among the factors which convinced them of the deal being "a major scandal".

"We are convinced that this is an enormous scandal that jeopardises national security and hence we feel the government must reveal the facts, especially the facts in relation to what the whole deal is going to cost the public exchequer," Shourie said.