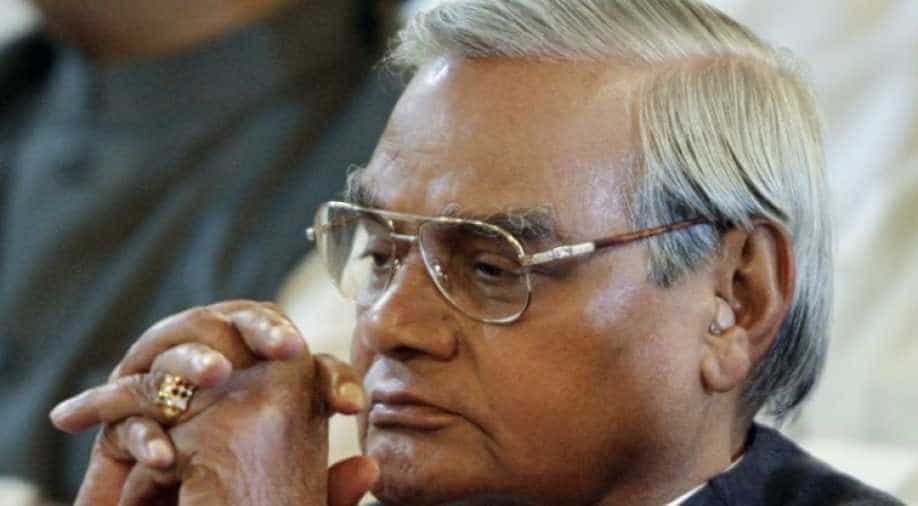 Awarded with the highest civilian award of India, Bharat Ratna, Vajpayee's stood like a colossus in Indian politics.

Former prime minister Atal Bihari Vajpayee who passed away on Thursday left an indelible mark on the country during his five decades in politics.

Awarded with the highest civilian award of India, Bharat Ratna, Vajpayee's stood like a colossus in Indian politics.

A political persona known for his exemplary leadership, Vajpayee is the only non-Congress leader who served the nation as the prime minister and completed his full term.

Vajpayee was born to Krishna Devi and Krishna Bihari Vajpayee on  December 25, 1924, in Gwalior. He completed his schooling from Saraswati Shishu Mandir, Gorkhi, Bara, Gwalior and went on to Victoria College (now Laxmi Bai College), where he graduated with distinction in Hindi, English and Sanskrit. He then completed his post-graduation with an MA in Political Science from DAV College, Kanpur, and was awarded a first-class degree.

His activism started with Arya Kumar Sabha of Gwalior, the youth wing of the Arya Samaj, of which he became the General Secretary in 1944. He also joined the Rashtriya Swayamsevak Sangh (RSS) as a swayamsevak in 1939.

Influenced by Babasaheb Apte, he attended the Officers Training Camp of the RSS during 1940-44 and became a "full-time worker" in 1947, technically a pracharak.

He gave up studying law due to the partition riots, and was sent as a vistarak (probationary pracharak) to Uttar Pradesh and quickly began working for the newspapers of Deendayal Upadhyaya, Rashtradharma (a Hindi monthly), Panchjanya (a Hindi weekly) and the dailies Swadesh and Veer Arjun.

Vajpayee's first exposure to politics was in August 1942, when he and his elder brother Prem were arrested for 23 days during the Quit India Movement, when he was released only after giving a written undertaking, expressly declaring not to participate in any of the anti-British struggles.

In 1951, he was seconded by the RSS, along with Deendayal Upadhyaya, to work for the newly formed Bharatiya Jana Sangh, a Hindu right-wing political party associated with the RSS. He was appointed as a national secretary of the party in charge of the Northern region, based in Delhi. He soon became a follower and aide of party leader Shyama Prasad Mukherjee.

In 1954, Vajpayee was with Mukherjee when he went on a fast-unto-death in Kashmir to protest against the perceived inferior treatment of non-Kashmiri Indian visitors in the state. Mookerjee died in prison during this strike.

In 1957, Vajpayee lost to Raja Mahendra Pratap in Mathura in the Lok Sabha, the lower house of Parliament of India, but was eventually elected from Balrampur.

After the death of Deendayal Upadhyaya, the mantle of the leadership of Jana Sangh fell on the shoulders of the young Vajpayee, who became the national president in 1968 and, along with Nanaji Deshmukh, Balraj Madhok and L. K. Advani, led the Jana Sangh to national prominence.

From 1975 to 1977, Vajpayee was arrested along with several other Opposition leaders during the Internal Emergency imposed by then Prime Minister Indira Gandhi. In 1977, heeding the call of social reformer Jayaprakash Narayan for all the opposition parties to unite against the Congress, Vajpayee merged the Jana Sangh into the newly formed grand-alliance - the Janata Party.

Following Janata's victory in the 1977 general elections, he became the Minister of external affairs in Prime Minister Morarji Desai's cabinet. As foreign minister, that year Vajpayee became the first person to deliver a speech in the United Nations General Assembly in Hindi.

By the time the Janata government crumbled in 1979, Vajpayee had established himself as an experienced statesman and a respected political leader. However, the Janata Party was dissolved soon after Morarji Desai resigned as Prime Minister in 1979.

Subsequently, Vajpayee joined many of his Bharatiya Jana Sangh and RSS colleagues, particularly L. K. Advani and Bhairon Singh Shekhawat, to form the BJP in 1980. He became the party's first president and emerged as a strong critic of the Congress (R) government that followed the Janata government.

Vajpayee served as the Prime Minister of India between 1996 and 2004 in three non-consecutive terms.

In the 1996 general elections, the BJP emerged as the single largest party in the Lok Sabha. The then president Shankar Dayal Sharma invited Vajpayee to form the government. Vajpayee was sworn-in as the 10th Prime Minister of India, but the BJP failed to muster enough support from other parties to obtain a majority. He resigned after 13 days when it became clear that he could not garner a majority.

In the 1998 general elections, BJP again finished ahead of the others. This time, a cohesive bloc of political parties joined the BJP to form the National Democratic Alliance (NDA), and Vajpayee was sworn-in as the Prime Minister.

However, in mid-1999, the All India Anna Dravida Munnetra Kazhagam (AIADMK) under J Jayalalithaa withdrew its support to the government. The government lost the ensuing vote of confidence motion in the Lok Sabha by a single vote on April 17th, 1999.

In the 1999 general elections, the BJP-led NDA won 303 seats out of the 543 seats in the Lok Sabha, in the aftermath of the Kargil operations, thereby securing a comfortable and stable majority. On 13 October 1999, Atal Bihari Vajpayee took oath as Prime Minister of India for the third time.

A parliamentarian for nearly five decades, Vajpayee was elected to the Lok Sabha ten times, and twice to the Rajya Sabha. He also served as the Member of Parliament for Lucknow, Uttar Pradesh, until 2009, when he retired from active politics due to health concerns.

Furthermore, the Centre under the leadership of Prime Minister Narendra Modi in 2014 announced that Vajpayee's birthday would be celebrated as "Good Governance Day" annually.