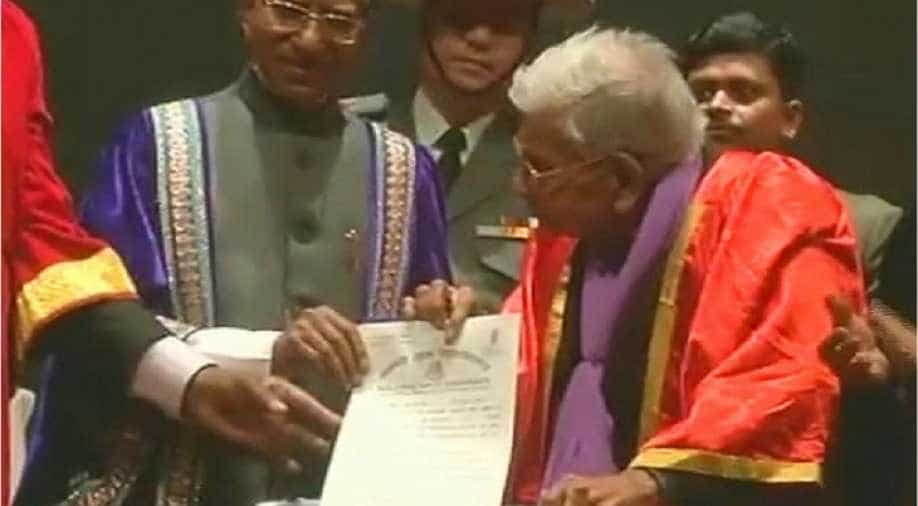 Vaish is probably the oldest person to get a post-graduate degree from the university, Registrar SP Sinha said. Photograph:( ANI )

A 98-year-old man was awarded his masters degree at the 12th annual convocation of Nalanda Open University, on Tuesday.

Raj Kumar Vaishya, whose name has been added in the Limca Book of Records, received his degree for MA Economics (2015) by Bihar governer Satya Pal Malik and Meghalaya governor Ganga Prasad.

Vaishya attended the ceremony with his son and daughter-in-law and was showered with loud cheers and applause.

"I am happy today. I had worked hard. For long, I had cherished the dream of completing my masters... the young should concentrate on their education and not on career alone," Vaish told reporters here after receiving the degree.

A total of 22,100 students were awarded degrees for their respective courses this year including 29 gold medalists.

"It is really a big achievement for NOU. Hats off to Vaish and his sheer determination to pursue studies at this age.... we wonder from where he draws so much energy," Registrar S P Sinha said.

Vaish is probably the oldest person to get a post-graduate (PG) degree from this university, he said.

Vaish reportedly completed his graduation from Agra University in 1938, did his LLB in 1940, but could not complete his PG as he got a job as 'law officer' with Christian Mica Industry at Koderma (now in Jharkhand).