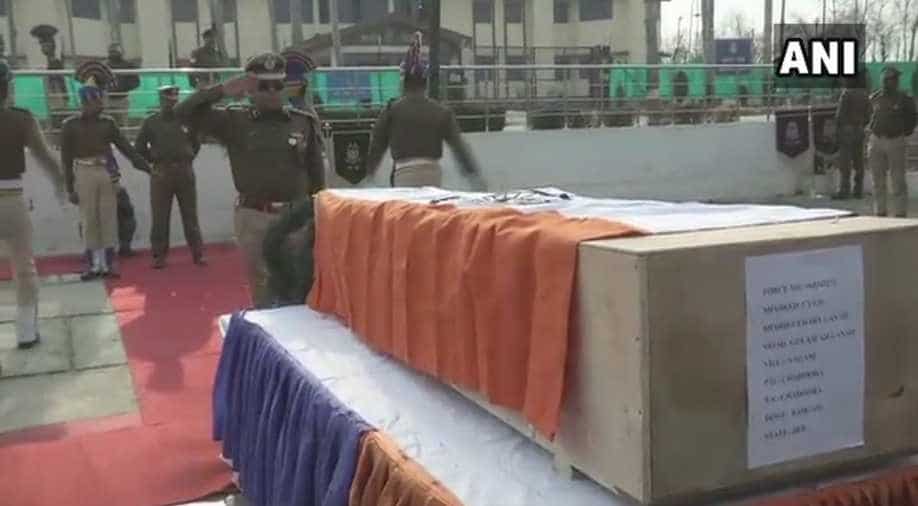 The wreath-laying ceremony of four CRPF jawans who lost their lives in action in the ongoing Pulwama attack. Photograph:( ANI )

Heavily armed terrorists on Sunday launched a pre-dawn attack on a CRPF camp in Pulwama district of south Kashmir, killing five personnel of the force and injuring three others, a security forces spokesperson said.

CRPF spokesperson Rajesh Yadav said the bodies of two terrorists have also been recovered while one more is believed to have been killed.

Jammu & Kashmir: Wreath laying ceremony of four CRPF jawans in Budgam. They lost their lives in action in the ongoing #Pulwama attack. pic.twitter.com/RE55SPAMoD

The CRPF said intermittent firing is still going on and one terrorist is believed to be holed up in the building block.

A CRPF officials said the "heavily armed militants stormed the camp at about 2 am. They were armed with under- barrel grenade launchers and automatic weapons. They were challenged by camp sentries."

One of the injured personnel was identified as Saifuddin, a resident of Nowgam here, officials said.

Director General of Police S P Vaid said security forces had inputs about an impending militant strike in the Kashmir Valley for the past three days.

Terming the attack as "unfortunate", Vaid said as long as Pakistan keeps sending militants, security forces and people of Kashmir will continue to go through this.

"There was an input from the last two-three days.They (militants) were trying. They probably could not get a place and time earlier. So, they struck last night," Vaid told reporters here.

The CRPF camp also serves as the training centre for troops inducted for counter-militancy operations in Kashmir Valley.

A Jammu and Kashmir Police team is also co-located with CRPF in this camp.