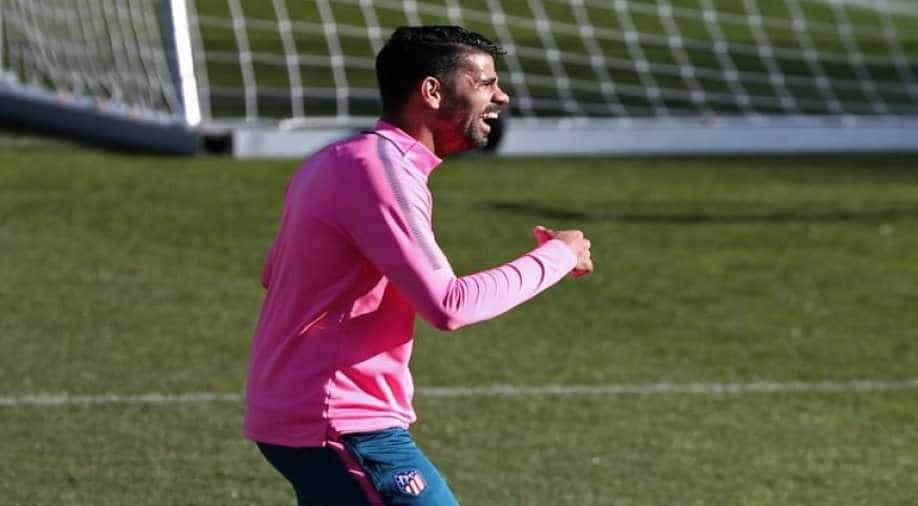 "I'm in much better shape than when I arrived, I've prepared well and worked hard and I'm ready to help the team and score goals," Costa said. Photograph:( Reuters )

Diego Costa is eager to begin his second spell at Atletico Madrid after spending the last three months confined to the club's training ground, shackled by the club's ban on registering new players, the striker said on Sunday.

"I've waited a long time for this day, I've been working hard and training hard but there's nothing else to do, I need to play, I'm tired of training," Costa told a news conference.

Costa, who fired Atletico to a first league title in 18 years in 2014, agreed a return to the club from Chelsea in September for 57 million pounds ($77 million), nearly double the price he left for more than three years ago.

He was officially presented alongside fellow Spain team-mate Vitolo -- who signed from Sevilla in July for 40 million euros -- before an open training session at the Wanda Metropolitano stadium, which local media said 20,000 supporters attended.

"I'm in much better shape than when I arrived, I've prepared well and worked hard and I'm ready to help the team and score goals," Costa said.

Atletico's ban on registering new players due to the illegal transfer of minors expires on Monday, meaning Costa could make his debut against Lleida Esportiu in the King's Cup on Wednesday, with his first league appearance set for Saturday at home to Getafe.

Atletico are second in the league but Costa's return cannot come soon enough for Diego Simeone's side who are nine points adrift of leaders Barcelona and had their confidence rocked by elimination from the Champions League group stage.

Their defence is as resolute as ever, conceding just eight goals in 17 games, but they have had serious difficulties creating and converting chances, scoring fewer goals (25) than the other teams in the top four.

It may not take the 29-year-old Costa long to catch up with his new teammates. Antoine Griezmann is Atletico's leading marksman with five league goals but Costa will have to prove his fitness as his last competitive game was for Spain in a World Cup qualifier against Macedonia on June 11.

Since Costa departed for London in 2014, Atletico have spent 144.5 million euros trying to replace him.

However, Mario Mandzukic, Griezmann, Jackson Martinez, Luciano Vietto, Kevin Gameiro, Angel Correa and Fernando Torres have all failed to top his 27 league goals in 2013/14 which helped Atletico to break Barca's and Real Madrid's nine-year stranglehold on the title.

"I want to thank the club from the bottom of the heart for the effort they made to bring me back here," said Costa.

"This is his home and we're going to give him the best welcome possible."