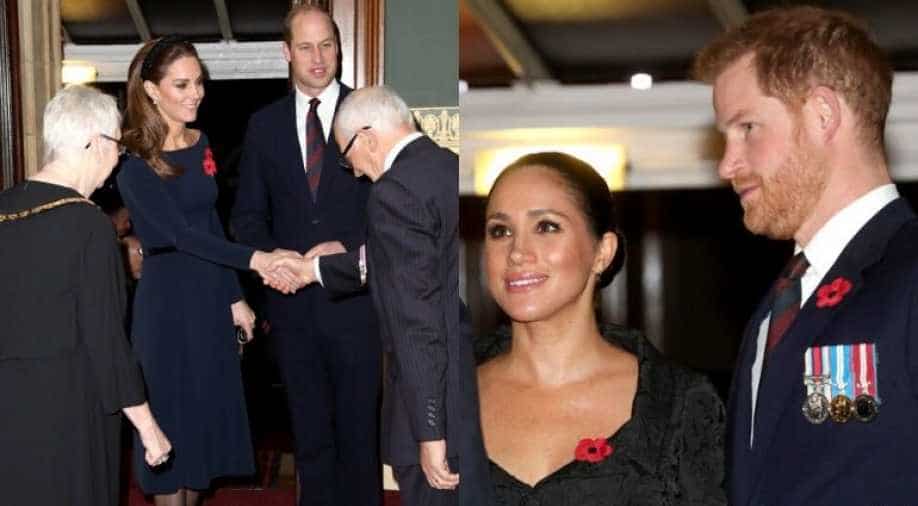 The royals officially parted ways earlier this year in March after they broke up their joint court at Kensington Palace by creating two separate offices.

The British royals - Prince Harry, Meghan Markle, Prince William, and Kate Middleton are back together as they reunited for the Remembrance service on Saturday.

The royal couples marked their very first public appearance at the Festival of Remembrance Service at Royal Albert Hall after their family playdate at a polo match in July, reported a magazine.

Any such public appearance goes hand in hand with Markle and Middleton acing the regal elegant charm with an exquisite ensemble and this time they opted for similar looks.

Both the royal ladies were seen in black dresses adorned with a red poppy pin, an artificial flower that has been used since 1921 to commemorate military members who have died in the war.

Tonight, members of the Royal Family are at the Royal Albert Hall for the Festival of Remembrance. The annual event, held in honour of those who have given their lives in the service of their country, has been marked since 1923. Tomorrow, Remembrance events culminate in the Cenotaph service on Whitehall which will be attended by more than 10,000 veterans and serving members of the Armed Forces. 📸 Press Association

Meanwhile, Prince William and Harry sported dark coloured suits with matching ties. This special event, which has taken place every year since 1923 in the same hall, commemorates all those who have lost their lives in conflicts.

The Earl of Wessex, The Duke of York, The Duke of Sussex and The Duke of Cambridge join the Nation in observing a two-minute silence to remember British and Commonwealth troops who have died in world wars and other conflicts. #RememberanceDay #WeWillRememberThem pic.twitter.com/bGhxU3DjpZ

It is held the day before Remembrance Sunday. Other members of the royal family who joined the four included Queen Elizabeth, Prince Charles, Camilla, Duchess of Cornwall, Princess Anne, Prince Edward and Sophie, Countess of Wessex.

On Thursday, Markle and Prince Harry visited the Field of Remembrance at Westminster Abbey as part of Remembrance Day services. The royals are expected to spend a major part of the weekend together.

This comes after the royals officially parted ways earlier this year in March after they broke up their joint court at Kensington Palace by creating two separate offices.