In pics: Shah Rukh Khan holidays with wife Gauri and kids in Maldives 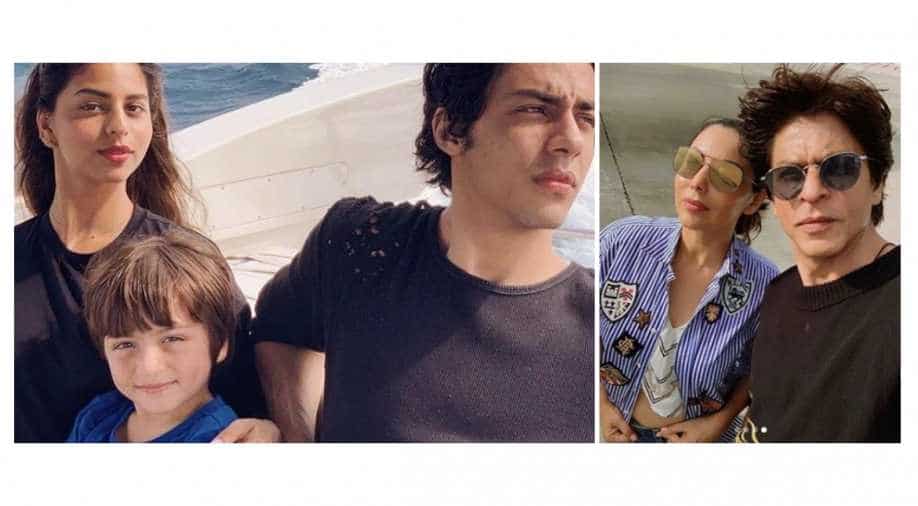 Shah Rukh Khan with his family in Maldives. Photograph:( Instagram )

Gauri and Shah Rukh shared a few glimpses of their vacation on Instagram.

It was a fun weekend for Shah Rukh Khan and his family as they recently came back from a vacation in Maldives.

Shah Rukh and wife Gauri shared a few pictures and videos from the beautiful location as they spent time together with daughter Suhana and sons Aryan and AbRam.

In one picture that Gauri shared, the kids could be seen having a gala time on a cruise as she captioned the image, “My three little hearts.” The three were dressed in casual attire with Suhana and Aryan in black while AbRam opted for a blue t-shirt and white pants.

Shah Rukh also shared a video and captioned it: “Feeling bad having to leave Maldives and especially all the wonderful people at #JumeirahVittaveli. Thank u for a lovely holiday @jumeirahvittaveli will miss u all. @makeplansholidays.”

Feeling bad having to leave Maldives and especially all the wonderful people at #JumeirahVittaveli. Thank u for a lovely holiday @jumeirahvittaveli will miss u all. @makeplansholidays

As for Shah Rukh’s professional commitments, he is currently taking a break from films and has not signed anything yet. In fact, he let go of many projects after his latest film ‘Zero’ tanked at the box office.

The actor, however, recently voiced the character of Mufasa for Hindi adaptation of ‘Lion King’ that released on July 19.

Glad to be a part of this journey... a timeless film. Voicing it in Hindi with my own Simba. The last time we did a film was around 15 years ago and it was ‘Incredible’ and this time around its even more fun. Hope everyone enjoys it 19th July onwards. #TheLionKing @disneyfilmsindia

Meanwhile, he is also producing a zombie horror show, ‘Betaal’, his third production for Netflix after ‘Bard of Blood’ which features Emraan Hashmi, and ‘Class of 83’ with Bobby Deol.