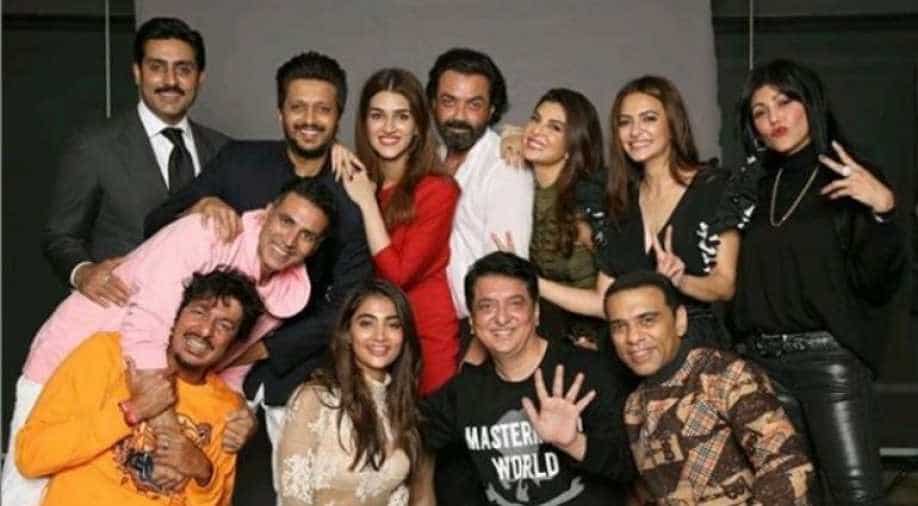 Akshay Kumar shared this image from the success bash of 'Housefull 4' Photograph:( Instagram )

Media reports suggest that a fifth sequel of the hit franchise is indeed being planned with Nandiadwala planning to bring back actors from the previous films in the franchise for a grand film.

Did Akshay Kumar just confirm the fifth instalment of 'Housefull 4'? On Sunday, Kumar posted a photo from the success bash of 'Housefull 4' which features actors Riteish Deshmukh, Kriti Sanon, Kriti Kharbanda, Bobby Deol, Pooja Hegde, Chunky Pandey, Jacqueline Fernandez and Abhishek Bachchan along with Kumar and the film's producer Sajid Nadiadwala. Akshay captioned the image as, "Last night was a #HouseFull of fun with friends from Housefull 1, 2, 3 and 4. Gearing up for 5? I don’t know."

Media reports suggest that a fifth sequel of the hit franchise is indeed being planned with Nandiadwala planning to bring back actors from the previous films in the franchise for a grand film. Which perhaps, explains why Jacqueline and Abhishek feature in the film who were part of 'Housefull 2' and 3 respectively.

What added fuel to the fire was Nadiadwala holding up five fingers in the photo, seemingly confirming the speculation.

Reports also suggest that the producer is keen on roping in Deepika Padukone ('Housefull'), John Abraham ('Housefull 2'), Abhishek Bachchan, Jacqueline Fernandez along with Akshay Kumar, Riteish Deshmukh and the rest of the cast of 'Housefull 4' for the fifth part.

This time, the comedy of errors will feature five couples thereby justifying the title of the film.

Nadiadwala reportedly has already got the idea in place and scripting will begin soon. But there is no confirmation of when the film will go on floors or its release date yet.

Released during Diwali this year, 'Housefull 4', which earned more than Rs 200 crore at the box office in India, is the highest-grossing film of the popular franchise. The film may have got mixed reviews from critics but still managed to set the cash register ringing.
'Housefull 4' starred Akshay Kumar, Riteish Deshmukh, Bobby Deol, Kriti Sanon, Pooja Hegde, Kriti Kharbanda, Rana Daggubati, Nawazuddin Siddiqui, Chunky Panday and Johnny Lever in key roles.