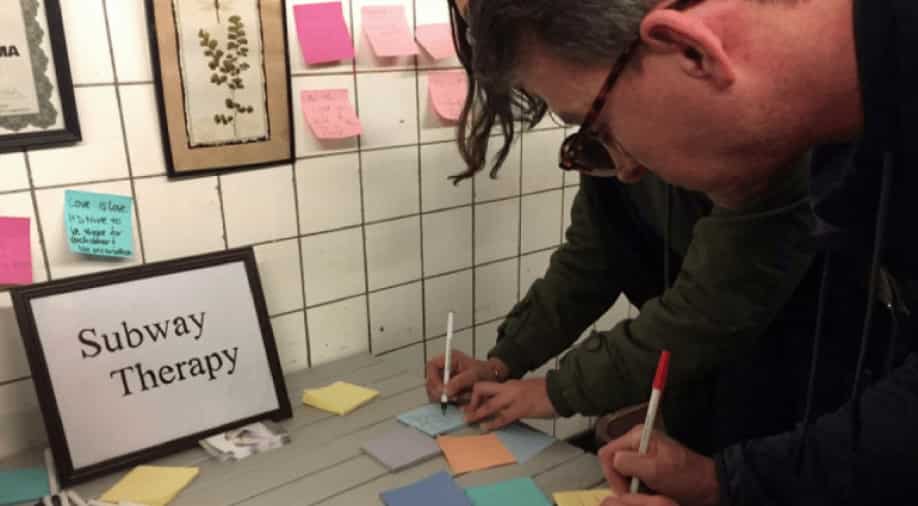 Subways in New York have turned into art installation passages, with thousands writing notes of unity, love, grief and more. Named Subway Therapy, the movement gained momentum after several thousands opened up their hearts and wrote, literally on the wall.

"Subway therapy" has popped up in #NYC's 14th Street Station, with people leaving positive messages after #election2016. Thanks to the ABC's Jake Sturmer for this pic! ?????? #subwaytherapy

Sometimes we all need a little #subwaytherapy

Leaving a protest on Wednesday night, exhausted and with a headache that hasn't completely gone away since Tuesday, I stumbled upon this wall of post-it notes in Union Square, where New Yorkers grieved, raged, and loved in pastel colors on the subway wall. The crowd that gathered stood quietly reading them one by one or scribbling their own. I added mine: "You matter. I love you. I am with you." I am and you do. I will do better. We will do better. #election #subwaytherapy #nyc

Another reason why I love New York. Coming together when it matters #AstorPlace #SubwayTherapy #NYC #StrongerTogether

We need a therapy. #subwaytherapy #expressyourself

Reason number 17392 why I love this city: someone created the idea of #subwaytherapy where you left a sticky note with an inspirational message. People were crying, smiling, laughing and soaking in all the love and reading the thousands of notes. The people united will never be defeated.

passed by this incredible project tonight on my home and left a little sticky note of my own.. man, I love this city. #subwaytherapy #i??ny #thefutureisfemale

For the next few hours I will be posting my favorite #SubwayTherapy post it's. To all of my #Muslim friends, know me and many others are here. If you feel harassed or scared we will sit with you, cry with you, throw some bows if need be. We WILL fight for you. #realAmerica #makingAmericaGreatFinally #love #religiousfreedom