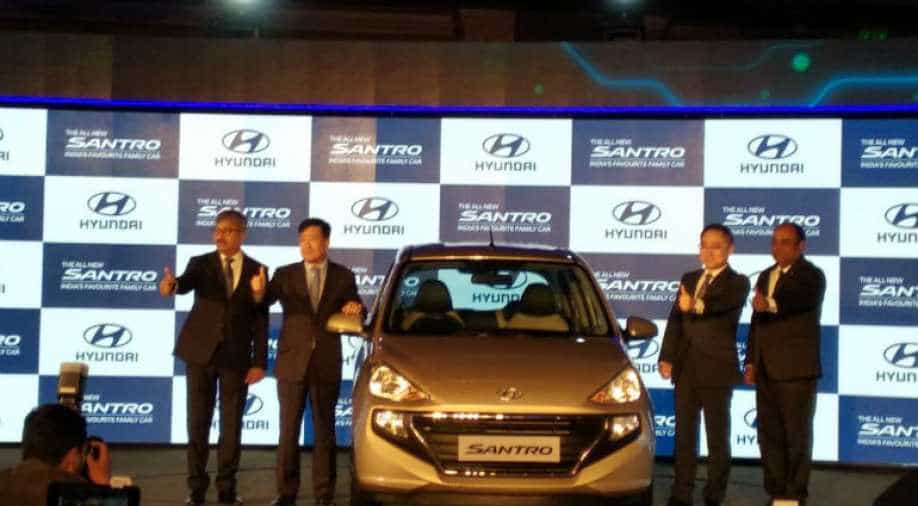 The overall design theme of the new Santro is based on Rhythmical Tension for a refined yet sporty image.

Automotive manufacturer Hyundai today re-launched the Santro in India. The Santro, originally launched 20 years ago, was Hyundai's most successful car and made the company popular with Indian car buyers.

The all new Santro was unveiled earlier this month and the pre-booking of the car was acceptable till Monday (October 22).

Under the hood, the new Santro is equipped with 4-Cylinder 1.1 Litre petrol engine. It is the first Hyundai model to offer in-house developed Smart Auto AMT Technology and will have Factory fitted CNG option, the company said.

The overall design theme of the new Santro is based on Rhythmical Tension for a refined yet sporty image. The front of car bears Hyundai’s signature cascade grille with chrome surround.

The new Santro will have standard ABS with EBD and Driver’s Airbag. It will have both front and Rear AC vents.

First introduced in 1998, the Hyundai Santro, was discontinued in 2014 to make way for the Grand i10. In most markets across the globe, the Grand i10 replaced the i10; however, in India, the Korean carmaker continued retailing both the generations side by side and thus had to halt the production of the Santro to make sure there wasn’t any cannibalisation within its portfolio.