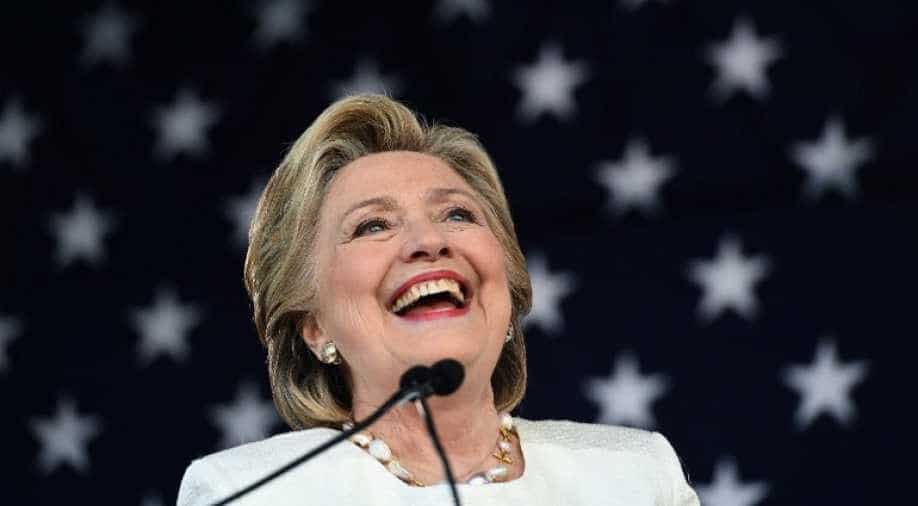 Hillary Clinton has declared that she will tighten regulations against banks. Photograph:( AFP )

Hillary Clinton began her presidential campaign by promising to do what it takes to rein in Wall Street.

Boosted by Wall Street's toughest critics, US senators Bernie Sanders and Elizabeth Warren, the Democratic candidate has declared "the deck is still stacked in favor of those at the top" and said she would raise bank fees and tighten banking regulations. She has encouraged regulators to break up too-risky banks.

And yet, Wall Street appears unperturbed by the prospect of a Clinton presidency. In fact, the banking industry has supported Clinton with buckets of cash and stocks have sold off on days when the Clinton campaign stumbles. Privately, bankers say that they trust her to remain a pragmatist who will keep the current regulatory regime laid down by the Dodd-Frank Wall Street reform legislation passed in 2010.

There are hints in apparently leaked email discussions among Clinton's campaign staff that bankers are not far off the mark when they count on her to tread lightly.

Pressed during the campaign by progressive Democrats to call for a revival of the Glass-Steagall Act that would require separation of commercial and investment banking, Clinton ultimately refused. She also weighed another progressive favourite --- a tax on financial transactions --- but instead recommended a far narrower plan to tax only canceled orders by high speed traders.

Ultimately, what bankers most like about Clinton is that she is not Donald Trump.

“Those are the kind of things that corner offices think about,” said Karen Shaw Petrou of Federal Financial Analytics Inc, whose firm advises financial firms about US regulatory policy. “The overriding concern about Trump has dominated people’s thinking."

Trump's candidacy has upended traditional political alliances and bankers that usually contribute more to the Republicans have been flinging money at Clinton.

Employees of the 17 largest bank holding companies and their subsidiaries have been sending her $10 for every $1 they contributed to Trump, according to a Reuters analysis. In 2012, the same group contributed twice as much to Republican candidate Mitt Romney as it did to President Barack Obama`s re-election campaign.

People who work for hedge funds and private equity firms have contributed more than $56 million to Clinton’s presidential campaign and the supporting groups that face no legal cap on donations. Trump’s campaign and related groups received just $243,000 from donors in the same sector, according to data from the Center for Responsive Politics.

"It’s basically going with the devil you know over the devil you don’t,” said Brian Gardner, a managing director of New York investment firm Keefe Bruyette & Woods. What also helped, he said, was the familiarity with Hillary and Bill Clinton dating back to the 1990s when her husband was president and ushered in a period of financial deregulation.

“There is a closeness and a comfort level between the titans on Wall Street and the Clintons," he said.

For bankers, the biggest worry is a scenario where Clinton wins and the Democrats take control of the House and the Senate, with progressives such as Warren and Sanders holding sway over everything from new tax laws to appointments of regulators.

Warren and other progressives will press Clinton to be tough on Wall Street in return for their campaign support.

Clinton "leaned heavily on Senators Elizabeth Warren and Bernie Sanders, and progressive ideas, when she needed to excite voters,” Adam Green with the Progressive Change Campaign Committee said. “Elizabeth Warren has proven she’s a very powerful ally to have on your side. And it’s well known she’s also a formidable opponent to have against you,” Green said.

However, recent polls suggest it is unlikely that Democrats will take the House and the future of the Senate is far from certain. Even if the Senate goes Democratic, it is likely to be led by New York Senator Chuck Schumer, a moderate who has represented Wall Street with the industry`s backing.

Clinton has said she will propose a "risk fee" on the largest financial firms and tighten up rules which allow banks to circumvent bans on proprietary trading by investing in hedge funds. Like Trump, she has proposed to end the tax break that private equity investors enjoy, termed "carried interest."

Yet such provisions will be probably tied up in a much larger tax initiative that will involve months, if not a year or more, of horse trading in Washington. Ultimately, it could end up overshadowed by other progressive goals, such as infrastructure funding, college affordability, or raising the minimum wage.

Those are the causes that Clinton has prioritized and they are likely to supersede her anti-bank rhetoric, say bankers. One industry trade group representative said: "We're not in her top 10 to take care of."