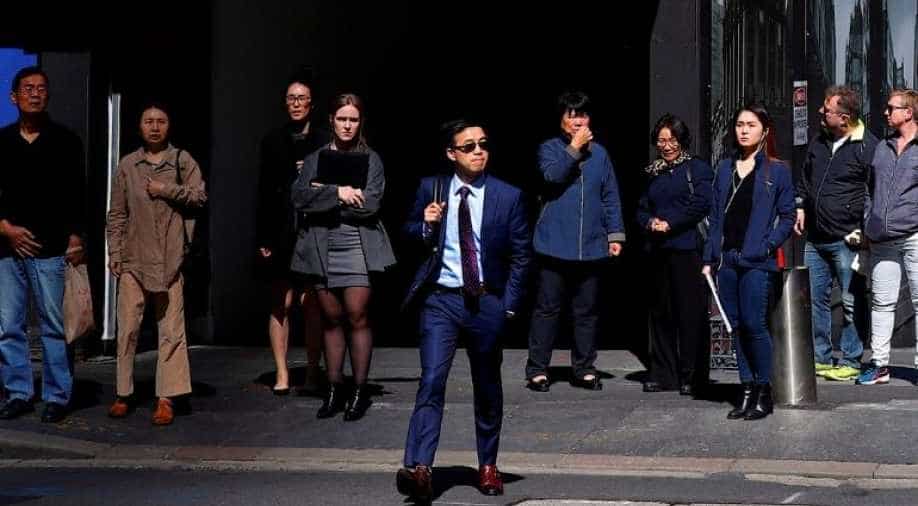 File photo: Pedestrians prepare to walk across a main road in front of a construction site in the central business district (CBD) of Sydney in Australia.  Photograph:( Reuters )

The disappointing report will also pile political pressure on the conservative government of Prime Minister Scott Morrison to launch a fiscal rescue package for the economy.

The local dollar fell a third of a cent to $0.6806 as the market narrowed the odds on a rate cut from the Reserve Bank of Australia (RBA) in December, though it was still considered an outside chance.

The disappointing report will also pile political pressure on the conservative government of Prime Minister Scott Morrison to launch a fiscal rescue package for the economy.

Morrison has so far resisted all calls for action, in part by citing continued strength of the labour market.

That position will be harder to defend given net new jobs fell 19,000 in October, the largest drop since late 2016. The unemployment rate also nudged up to 5.3 per cent, reversing a promising dip in September.

Analysts polled by Reuters had forecast a gain of 15,000 jobs and an unemployment rate of 5.3 per cent.

"Ideally the government would step in to deliver an additional fiscal stimulus, but if this fails to eventuate the RBA could adopt unconventional policy and cut the cash rate to 0.25 per cent."

The central bank has already cut rates three times to a historic low of 0.75 per cent, but so far the only impact has been a revival in-home price inflation.

Financial markets imply around a 24 per cent probability of a quarter-point easing at the RBA's next meeting on Dec. 3, rising to 62% for February.

Just last week the RBA threw in the towel on getting wages going, forecasting miserly annual growth of 2.3 per cent right out to 2021. Indeed, data out on Wednesday showed wage growth actually went backwards to 2.2 per cent in the September quarter.

Up until now, Australia's problem was not a dearth of hiring. Some 251,800 net new positions were created in the year to October, with the majority full time.

Annual jobs growth ran at a solid 2.0 per cent, comfortably above the latest US performance of 1.4 per cent.

The trouble, ironically, is that the labour market has proved too flexible in providing the workers needed to fill those jobs. All the growth in employment was met by an increased supply of labour, thus keeping the jobless rate up.

Participation in the workforce is up near-record peaks at 66.0 per cent and, adding in those who want to work more hours, the underutilisation rate was a high 13.8 per cent.

This phenomenon is partly a direct result of government policy. Extending childcare and disability payments have lifted the share of females in the workforce to all-time peaks.

The conservative government of Prime Minister Scott Morrison has also kept the doors wide open to skilled migration, with net arrivals running at almost 300,000 in the year to September, the highest in more than five years.

It has also imposed caps on pay rises for the public sector which has kept growth well under 3% for every year since 2013.