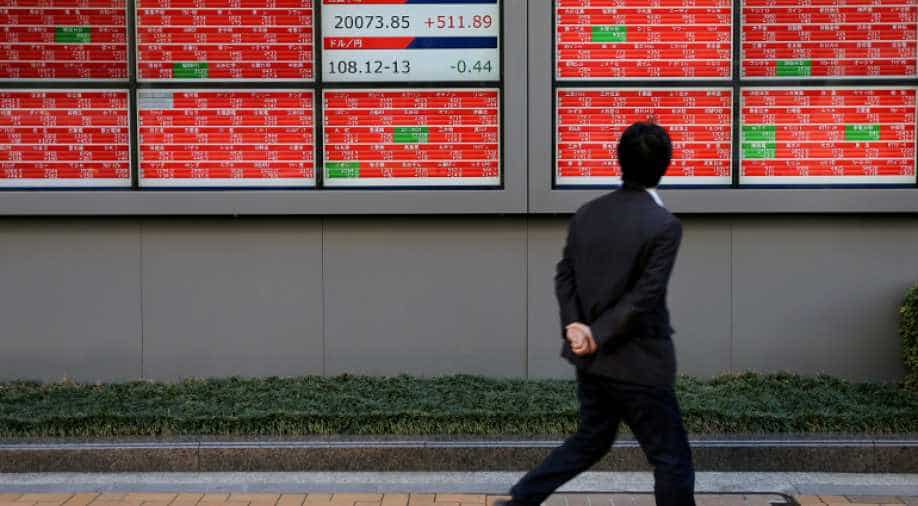 Asia-Pacific private equity (PE) continued to set new highs for the industry in 2018 but investors should expect tougher times ahead.

This according to a recently released report on the PE market by global management consultancy, Bain and Company.

In 2018, deals values hit record highs together with exit values but fund-raising declined.

Leading the way in Asia-Pacific deal-making are China and India, which accounted for 75 per cent of the total deal value in the region.

However, it`s important to note that China's private equity market consists of two markets which operate very differently - one for transactions in renminbi which is almost entirely exclusive to domestic funds and one in foreign currencies.

With $883 billion in total assets under management, Asia-Pacific now represents 26 per cent of the global PE market, up from only 9 per cent just a decade ago.

As General Partners (GPs), compete for deals against corporate players, increasingly they are winning. (A GP is the entity that manages the fund.)

Private equity's share of the Asia-Pacific M&A market rose 6 percentage points to 17 per cent in 2018, from the previous five-year average of 11 per cent. Despite higher deal values, exit values and increasing M&A market share, overall fundraising in Asia-Pacific was sharp lower declining more than 50 per cent to $75 billion, after a record high in 2017, Bain said in its report. 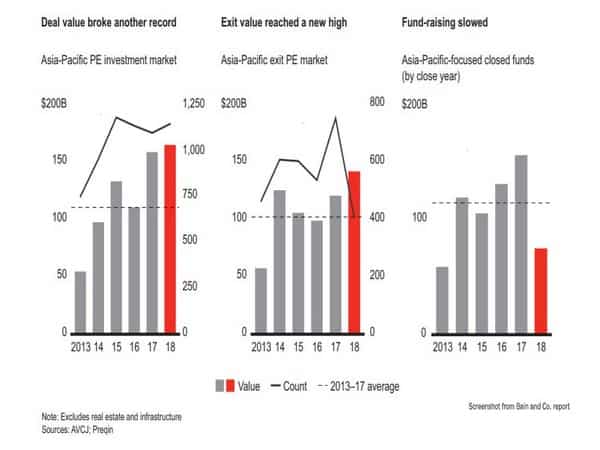 The report further added that the strength of previous years masked three disconcerting market developments that could affect investment activity and returns in the coming year. First, US-China trade tensions have increased the risk of macroeconomic disruption in China and across the region.

Secondly, deal prices have remained high while interest rates are rising steadily after a period of decline, a trend that will increase the cost of funding and could put a brake on future multiple expansion.

Third, and perhaps most telling, the region's private equity market has become sharply polarized between large funds with strong track records that dominate activity across the region, and smaller, less experienced funds that are having difficulty raising funds and exiting. These economic and market trends could slow the revenue growth and multiple expansion that powered Asia-Pacific PE returns in recent years.

In past recessions, the PE market has outperformed other asset classes. But if recession strikes, vulnerable and less differentiated funds are likely to disproportionately bear the brunt of the downturn. There is a growing acute divide between winners and losers that became more evident in 2018. This could impact a significant number of funds especially smaller funds with smaller deals in the coming year. To win even in a tougher market, many will have to work hard to raise their game.

Thirty-two mega deals (USD 1 billion or more in value) pushed the average deal size to $151 million, on par with last year and up 27 per cent over the previous five-year average of $119 million. These mega deals made up 39 per cent of deal value, compared with an average 33 per cent over the last five years. A critical factor in PE investing is a successful exit strategy. In an exit, the PE firms leave an investment position by selling a stake in a company in which it`s invested.

For example, Bain said, exits involving companies sold for under USD 100 million dropped 58 per cent last year, while those in excess of USD 500 million increased 26 per cent. Kiki Yang, Bain`s co-head of Asia Pacific private equity and co-author of the report, said in an accompanying release that "we're seeing warning signs that suggest the party may be coming to an end, at least for some investors ..... with the risk of global recession and other macro-economic challenges, we expect the market for exits will only get tougher.

"Looking forward, three important themes are playing an increasing role in the Asia-Pacific private equity market: the rush to invest in China tech and Internet companies; the use of advanced analytics as a tool to improve fund performance; and a shift toward environmental, social and governance (ESG) and impact investing. It warned however that PE investors are increasingly cautious with China`s Internet-based "new economy" that may be a speculative bubble waiting to burst. The report continued, "The huge volume of private equity and venture capital flowing into China's new economy has oversaturated the lower end of the market, prompting investors to seek larger investments."

With trends suggesting that the PE market is beginning to differentiate better-established funds as well as with the gathering macroeconomic uncertainty, revenue growth and multiple expansions in the Asia-Pacific PE market is expected to decline. Less differentiated and smaller funds are the most vulnerable and would be disproportionately affected.