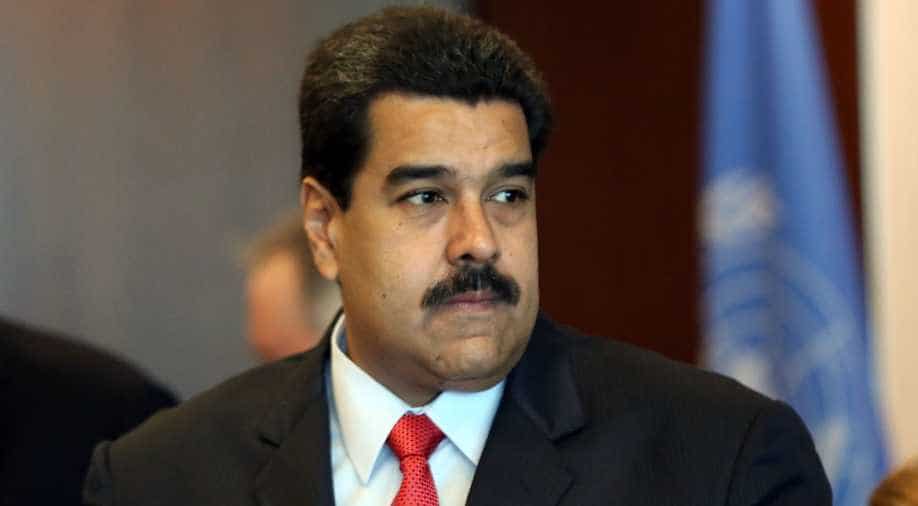 Maduro's adversaries accuse him of creating a dictatorship by leaning on compliant institutions. They have demanded the government release around 100 jailed opposition activists and bring forward the next presidential elections. Photograph:(Getty)
Follow Us

Venezuela freed four activists and the opposition postponed a symbolic trial in congress of President Nicolas Maduro on Tuesday even as it warned it would quit Vatican-backed talks in a matter of days if tough conditions were not met.

Maduro met with opposition leaders on Sunday for the start of talks to ease a political standoff between the ruling Socialist Party and the opposition-led parliament during a spiraling economic crisis.

As well as suspending its parliamentary proceedings against Maduro, the opposition also agreed to postpone a march planned for Thursday to the presidential palace that the government had described as part of a coup plot.

But it demanded that the government release around 100 jailed opposition activists and bring forward the next presidential election - conditions that are likely to meet with significant resistance from government leaders.

Venezuela's next presidential election is due in late 2018.

"We have put these points on the table, not so that they can be addressed in months but rather in the coming days and weeks," said opposition legislative leader Julio Borges during Tuesday's session. "Otherwise, we will walk away from the negotiating table and continue with our struggle."

Without concrete progress, Borges said, the opposition would reopen the political trial and resume protests. Hundreds of thousands of people took to the streets last week in demonstrations that left dozens arrested and wounded.

Maduro's adversaries accuse him of creating a dictatorship by leaning on compliant institutions to block the recall referendum and sideline the National Assembly.

The Socialist Party lost control of the legislature in a landslide election in 2015 that was driven primarily by voter outrage over triple-digit inflation and widespread product shortages that have left many unable to eat three meals per day.

Maduro insists economic troubles are the result of an "economic war" imposed by hostile businessmen with the help of Venezuela's ideological adversaries in Washington.

The two sides have held repeated dialogue processes over the years that generally produced limited results.

"I congratulate the opposition because they are calming down," Maduro said in a radio show.

"What is the alternative to dialogue? War."

Many in the opposition have called the dialogue a stalling tactic and insist Maduro has no intention of allowing a referendum or an early presidential vote.

Moreno and Trejo spent a month in jail, accused of damaging military morale in a political propaganda video that showed a soldier suffering the same economic hardships as protesters.

The opposition's coalition on Tuesday said authorities had also released Coromoto Rodriguez, head of security for the legislature who was arrested during an opposition rally in May.

Government critics had said the detention was illegal and called it an effort to intimidate the legislature.

Investigations of the activists will continue, the government says. The three deny the charges.

As well as the Vatican, three former heads of state from Panama, Dominican Republic and Spain plus the regional bloc Unasur are trying to foster dialogue in Venezuela.

Senior U.S. diplomat Tom Shannon is also in Caracas and met with Maduro on Monday to try and support the talks.

Having narrowly won election in 2013 to replace Hugo Chavez, who died of cancer, Maduro has seen his popularity plummet, largely due to the OPEC nation's unprecedented economic crisis.