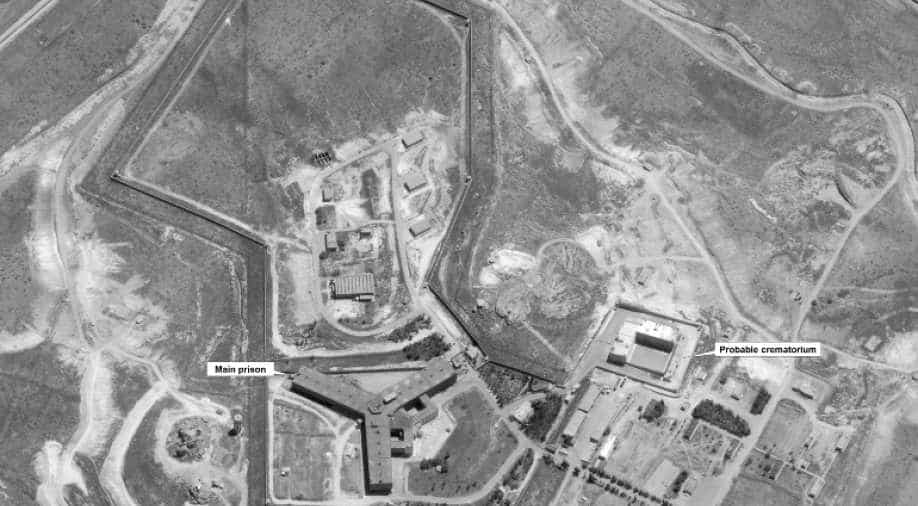 A handout satellite image dated April 18, 2017 courtesy of DigitalGlobe and released May 15, 2017 by the US Department of State shows the Saydnaya prison. (Image source: DigitalGlobe) Photograph:( AFP )

The United States on Monday accused Syria of building a prison crematorium to destroy the remains of thousands of murdered detainees, putting pressure on Russia to rein in its ally.

Warning Moscow it should not turn a blind eye to Bashar al-Assad's crimes, the State Department released satellite images that it said backed up reports of mass killings at a Syrian jail.

"The United States is on record, has stated many times, that we are appalled by the atrocities that have been carried out by the Syrian regime," said Stuart Jones, the top US diplomat for the Middle East.

"And these atrocities have been carried out seemingly with the unconditional support from Russia and Iran."

And he added a message to President Vladimir Putin's government: "Russia must now, with great urgency, exercise its influence over the Syrian regime to guarantee that horrific violations stop now."

Jones' warning came as UN-mediated peace talks between Damascus and the Syrian opposition were about to resume in Geneva, and appeared aimed at maintaining pressure on Assad's backers.

The head of the opposition delegation to the talks welcomed the US statement, but complained it had come too late.

"This is but a drop in the ocean. What happens in the regime's prisons is much uglier than this," Nasr al-Hariri said.

"The time has come for the world -- chiefly the US -- to act to halt these human rights violations."

One newly released image, a commercial satellite photograph dating back to January 2015, shows snow melting on the roof of a building attached to the Saydnaya military complex north of Damascus.

This, along with an earlier picture allegedly showing heavy-duty ventilation systems on the structure, appears to support earlier claims by rights groups that Saydnaya is an execution center.

"Beginning in 2013, the Syrian regime modified a building within the Saydnaya complex to support what we believe is a crematorium" built in "an effort to cover up the extent of the mass murders taking place in Saydnaya," said Jones.

Jones, an acting assistant secretary of state, said Washington's information came from credible humanitarian agencies and from the US "intelligence community" -- implying that classified evidence beyond the commercial pictures exists.

At Saydnaya, Syria holds up to 70 prisoners in cells that are meant for five, Jones alleged.

"And according to multiple sources, the regime is responsible for killing as many as 50 detainees per day at Saydnaya."

He did not give an official estimate for the total number killed, but cited an Amnesty International report that between 5,000 and 11,000 had died in the prison between 2011 and 2015.

Assad's regime, he alleged, has detained between 65,000 and 117,000 people over the same period -- the first five years of a civil war that has left hundreds of thousands dead.

It was not immediately clear why the United States waited more than two years to present its evidence.

Jones said: "I would say that this information has been developing."

Moscow, along with Iran, is Syria's main foreign backer and Washington believes Russian pressure is the only thing that will compel Assad to negotiate a peace deal.

President Donald Trump came to office vowing to focus US efforts in Syria on defeating the Islamic State group, a jihadist force that exploited the civil war to seize the east of the country.

He also said he hoped to work with Putin towards this goal.

But relations with Moscow, already dire under Trump's predecessor Barack Obama, have not improved and Assad has continued to bombard civilian areas in his battle with opposition rebels.

Last month, when Assad was again accused of using the banned nerve agent sarin in a strike on his own people,

Trump ordered a retaliatory US cruise missile strike on a Syrian air base.

When asked whether the Saydnaya deaths could trigger action, White House spokesman Sean Spicer said Trump would never "telegraph the actions he takes."

"When he's ready to act, he will let everyone know," he said.