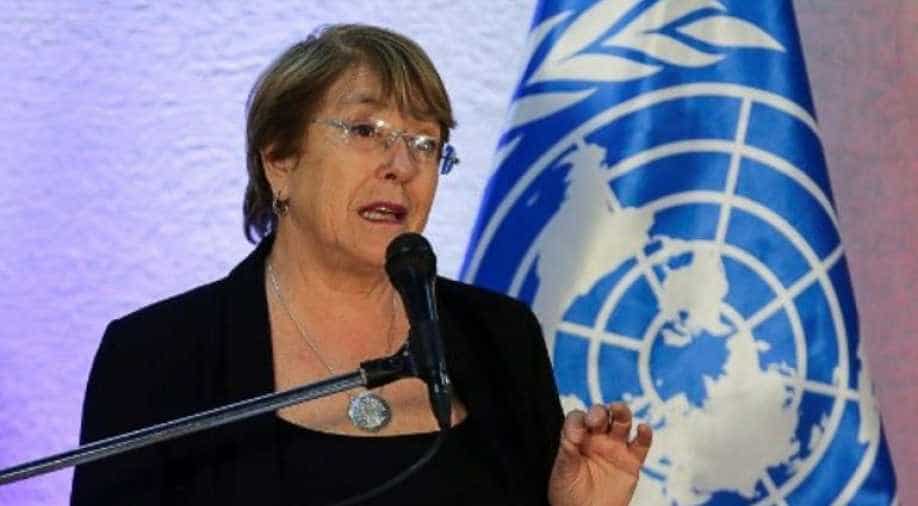 The city endured another night of chaos on Friday, after leader Carrie Lam banned face masks at demonstrations.

United Nations Human Rights Chief Michelle Bachelet said Saturday she was "troubled" by Hong Kong's increasingly violent pro-democracy protests and stressed that any measures to quell the unrest must be grounded in law.

The city endured another night of chaos Friday, after leader Carrie Lam banned face masks at demonstrations, invoking colonial-era emergency powers not used for half a century.

"We are troubled by the high levels of violence associated with some demonstrations that have been taking place in the past days," Bachelet said during a visit to Malaysia.

She said she was "alarmed" by injuries to police, protesters and journalists covering the demonstrations.

"I strongly condemn all acts of violence from all sides," she added.

Asked about the ban on face coverings, she said: "We believe that any restriction must have a legitimate and formal basis in law, has to be proportionate."

"Freedom of peaceful assembly... should be enjoyed without restriction to the greatest extent possible. But on the other hand, we cannot accept people who use masks to provoke violence", she said.

Much of Hong Kong ground to a halt Saturday following the previous night's violence, with the subway suspended and shops shuttered, while hundreds of masked protesters took to the streets again in defiance of the face mask ban.

The financial hub has been rocked by unprecedented protests for four months, with demonstrators angered by what they see as Beijing's tightening grip on the semi-autonomous city.

They were sparked by opposition to a now-scrapped proposal that would have allowed extraditions to mainland China but have morphed into a wider movement calling for democratic freedoms and police accountability.