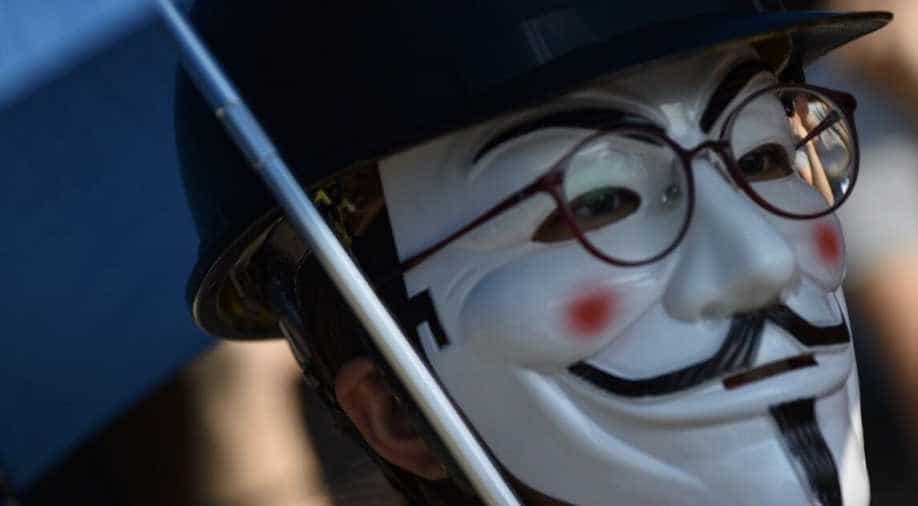 The latest act of resistance came after a night of widespread night of chaos as hardcore protesters trashed dozens of subway stations vandalised shops with mainland China ties, built fires and blocked roads.

Pro-democracy protesters marched through Hong Kong in defiance of a ban on face masks as much of the city ground to a halt on Saturday with the subway suspended and swathes of shops and malls shuttered following another night of violence.

Hundreds of protesters, almost all masked, staged an unsanctioned march through the popular shopping district of Causeway Bay, a day after the city's leader outlawed face coverings at protests invoking colonial-era emergency powers not used for half a century.

The latest act of resistance came after a night of widespread night of chaos as hardcore protesters trashed dozens of subway stations vandalised shops with mainland China ties, built fires and blocked roads.

As the crowds were marching on Saturday, city leader Carrie Lam released a stony-faced video statement in which she condemned protesters for "a very dark night".

"We cannot allow rioters any more to destroy our treasured Hong Kong," Lam said as she called on citizens to distance themselves form the more hardcore protesters.

But the march in Causeway Bay, which came despite the city-wide subway closure, showed protesters were still willing to defy the mask ban as they chanted "No rioters, only tyranny" and other popular slogans.

Hong Kong has been battered by four months of increasingly violent pro-democracy protests.

The rallies were ignited by a now-scrapped plan to allow extraditions to the mainland, which fuelled fears of an erosion of liberties promised under the "one country, two systems" model China uses for the finance hub.

After Beijing and local leaders took a hard line, the demonstrations snowballed into a wider movement calling for more democratic freedoms and police accountability.

Lam has refused any major concessions but struggled to come up with any political solution that might end the chaos, leaving police and demonstrators to fight increasingly violent battles as the city tips into recession.

Hong Kong witnessed its worst clashes to date on Tuesday as China celebrated 70 years of Communist Party rule, with a teenager shot and wounded by police as he attacked an officer.

On Friday, Lam used a colonial-era law to ban face masks at protests, but it did little to clam tensions.

Instead, it triggered another wave of mass protests and vows of defiance.

"The government doesn't listen to us. So we are upping our game," said 32-year-old protester Nathalie, as hardcore demonstrators trashed a station in the previously calm neighbourhood of Tseung Kwan O.

In the northern district of Yuen Long, a plainclothes police officer opened fire when he was surrounded in his car and attacked by protesters, a petrol bomb exploding at his feet.

Local media reported a teenage boy was shot and wounded in the same district but police would not confirm whether the bullet came from the officer's gun.

City grinds to a halt

As the city awoke on Saturday, the rail network remained out of action -- although the crucial airport service partially re-opened in the afternoon. The subway alone usually carries some four million passengers a day.

Shopping malls were closed, supermarket chains said they would not open and many mainland Chinese banks stayed shuttered, their facades sprayed with graffiti.

In some locations, long lines formed at supermarkets as residents stocked up on rice, eggs, toilet paper and other essentials, fearing further clashes.

While the increased vandalism has shocked many in a city unused to such scenes, many more moderate activists say they still have sympathy for those using violence.

The movement deploys many slogans advocating unity within the different camps pushing for democracy.

On Saturday afternoon a 67-year-old property agent, who gave his surname Luk, was surveying the damage to his local subway station, its windows shattered and walls daubed with graffiti.

He said he opposed vandalism but wouldn't condemn those trashing the station.

"The government will not make any concessions," he told AFP. "The government isn't having a dialogue with citizens, they are just pushing this one-side behaviour."

A French resident, who gave his first name Marko, described the face mask ban as "adding oil to the fire".

"But I think the people who destroyed the stations are extremists," he added.

But critics said Lam's move was a major step towards authoritarianism.

The emergency power, last used by the British in 1967, allows Lam to bypass the city's parliament to make "any regulation whatsoever" during an emergency or moment of public danger.