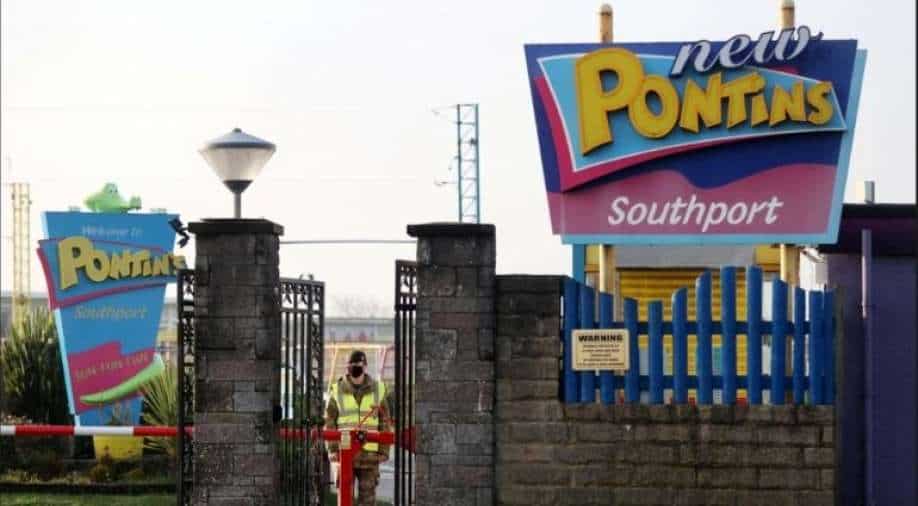 A file photo of a soldier guarding the gate of the Pontins Southport Holiday Park in Ainsdale, Britain. Photograph:( Reuters )

The list used internally at Pontins and obtained by the i newspaper included surnames commonly found in Ireland and within the Irish diaspora in Britain, such as Doherty, Gallagher, Murphy, Nolan, O'Brien and O'Connell

A British chain of holiday parks was until recently using an 'undesirable guest list' to stop people with Irish surnames from making bookings, an anti-discrimination watchdog said on Tuesday.

The list used internally at Pontins and obtained by the i newspaper included surnames commonly found in Ireland and within the Irish diaspora in Britain, such as Doherty, Gallagher, Murphy, Nolan, O'Brien and O'Connell.

The list was aimed at stopping Gypsies and Irish travellers from staying at Pontins facilities, according to a whistleblower, who contacted the Equality and Human Rights Commission.

"It is hard not to draw comparisons with an ‘undesirable guests’ list and the signs displayed in hotel windows 50 years ago, explicitly barring Irish people and Black people," said Alastair Pringle, the commission's executive director.

"Banning people from services based on their race is discrimination and is unlawful. To say that such policies are outdated is an understatement."

The whistleblower told the i that while working in the booking department at Pontins, which runs six holiday parks in England and Wales, he was instructed to refuse or cancel bookings requested by customers, whose names were on the list.

Britannia Jinky Jersey Limited, the company that owns Pontins, signed a legally binding agreement with the commission in which it pledged to prevent discriminatory practices.

"Britannia Jinky Jersey Limited has agreed to work together with the Equality and Human Rights Commission to further enhance its staff training and procedures in order to further promote equality throughout its business," a spokesman said in a statement posted by the Commission.

Irish higher education minister Simon Harris, one of many who reacted to the case in Ireland, said he was saddened and angered.

"As a child, my family and I holidayed in Pontins many times. Childhood memories of a happy place and good times are now replaced by a sense of disgust that such prejudice would exist," he said on Twitter.

A spokesman for Prime Minister Boris Johnson described the list as 'completely unacceptable'.