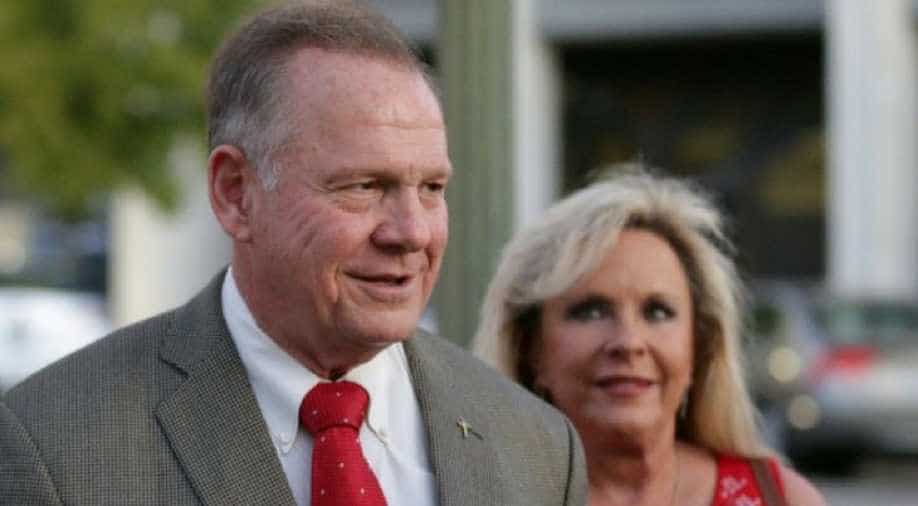 Two more women came forward on Wednesday with allegations of sexual misconduct against embattled Republican US Senate candidate Roy Moore, one accusing him of groping her and the other of forcing a kiss on her when she was about 18.

They are the sixth and seventh women to accuse Moore of sexual improprieties.

Gena Richardson told the Washington Post that Moore, then a 30-year-old attorney, had repeatedly asked her for a date in 1977 just before or after she turned 18. Richardson said she finally agreed and went to a movie with Moore, the Post said.

In a dark parking lot at a mall in Gadsden, Alabama, Richardson said Moore gave her an unwanted, "forceful" kiss that scared her, the Post reported.

Another woman, Tina Johnson, told AL.com, an Alabama news site, that Moore groped her while she was in his Alabama law office on legal business in 1991.

Johnson, who was 28 at the time, said she visited Moore`s office with her mother, who had hired Moore in a custody case involving Johnson's 12-year-old son.

Johnson said Moore grabbed her buttocks as she left. "He didn`t pinch it, he grabbed it," Johnson told AL.com.

Reuters was unable to independently verify the allegations from either woman, and Moore's campaign did not immediately respond to a request for comment.

Five other women have accused Moore of sexual misconduct or of dating them when he was in his 30s and they were teenagers, prompting a wave of demands from national Republican Party leaders that he drop out of the December 12 special Senate election to fill the seat vacated by Jeff Sessions when he was named US attorney general last spring.

Moore, 70, on Wednesday denied the allegations of the first five women to step forward.

"We are in the process of investigating these false allegations to determine their origin and motivation," he said in a statement.

Moore also said he believed a message that one of the accusers, Beverly Young Nelson, said he had written in her high school yearbook had been tampered with. Nelson accused Moore of sexually assaulting her when she was 16 and he was in his 30s.

Nelson displayed the yearbook message at a news conference in New York where she made the allegations on Monday. Moore`s campaign on Wednesday demanded that Nelson turn over the yearbook to a neutral custodian so a handwriting expert could examine it.

Republican leaders in Washington have asked Moore to withdraw from the race and said they are exploring write-in options for the election. The Alabama state party's leadership was meeting on Wednesday night to discuss their stance.

US Senate Republican leader Mitch McConnell has spoken to President Donald Trump and others about the situation. Trump appeared at the White House on Wednesday but did not make any mention of Moore.

Under state law, Moore cannot be removed from the ballot. If, however, the state party tells election officials that it wants to withdraw its nominee, or if Moore himself decided to do so, election officials would not certify any votes cast for Moore.

A Democratic win in Alabama would be a blow to Trump's agenda and shift the political outlook for next year's congressional elections, giving Democrats a stronger shot at wiping out the Republican's 52-48 Senate majority.

Moore has suggested that McConnell and other establishment Republicans are working in tandem with news media to discredit him.

The Washington Post had first disclosed allegations by four women about their relationships with Moore when they were teenagers, ranging in age from 14 to 18. One of the women said he initiated sexual contact with her when she was 14 and Moore was in his 30s.