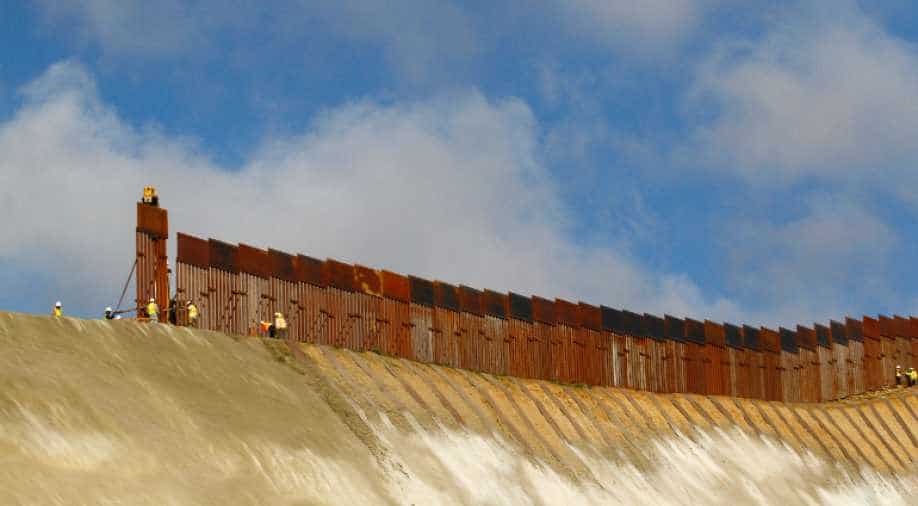 If Mexico does not stop migrants from transiting across its territory, and if Congress does not act, he said, 'the border's going to be closed, 100 per cent.'

President Donald Trump said Tuesday he is "100 per cent" prepared to close down the US-Mexico border, warning Congress and Central American governments to take action to stem the flow of migrants into the country.

Delays were already rising at several key border crossings as Trump ratcheted up pressure on Democrats in Congress to toughen US laws against illegal immigrants, threatening to hurt the US economy in the name of border security.

"It is a national emergency on the border," Trump said.

If Mexico does not stop migrants from transiting across its territory, and if Congress does not act, he said, "the border's going to be closed, 100 per cent."

"Sure it's going to have a negative impact on the economy," he said. "Security is more important to me than trade."

Trump said Democrats were blocking reforms for political reasons but could fix the problem "in 45 minutes."

He was not specific, but Homeland Security Secretary Kirstjen Nielsen has asked Congress to give border officials the power to forcibly repatriate Central American illegal immigrants, including children who arrived alone, back to their countries.

The threat to close the border, which handled some $612 billion worth of trade in 2018, sent shivers through the economy, and drew warnings from allies of the president.

"Closing down the border would have potentially catastrophic economic impact on our country, and I would hope we would not be doing that sort of thing," Senate Majority Leader Mitch McConnell said.

His call was backed by the Chamber of Commerce, which said in a statement that while it backed immigration reform, closing the border "would inflict severe economic harm on American families, workers, farmers and manufacturers across the United States."

Homeland Security officials said they were preparing for the possibility of a shutdown of at least some border entry points as they divert staff to deal with the flood of migrants from Guatemala, Honduras and El Salvador, expected to hit nearly 100,000 a month.

Nielsen cut short an official trip to Europe to return for meetings early Tuesday on the border crisis, and on Monday Acting Defense Secretary Patrick Shanahan said he would be meeting Nielsen and Secretary of State Mike Pompeo on the crisis.

Officials said facilities for handling the migrants -- who for the moment cannot be sent back after they cross the border and request asylum -- are overtaxed and understaffed, creating hazardous conditions.

"We are in a full-blown emergency. The bottom line is all options are on the table right now," a senior Homeland Security official, who declined to be named, told journalists Tuesday.

Trump said Mexican officials had reacted to his threat to close the border last week by clamping down on the caravans of migrants fleeing poverty and violence in the three Central American countries.

Mexico "made a big step over the past two days," he said, adding that they would have to continue if they don't want the border closed.

He also defended his decision to cut off "hundreds of millions of dollars" in US aid to the three countries, accusing them of arranging the caravans of migrants.

The three "don't do anything for us," he said.

On Monday, Nielsen ordered an "emergency surge" of personnel to deal with the situation, including moving 750 staff to areas of the border where the migrants arrive.

Many were being diverted from official ports, leading to slowdowns in processing arriving visitors and commercial vehicles.

Delays for incoming traffic were three hours at Brownsville, Texas, for the second straight day, and more than two hours in other areas.

On the Mexican side, Andres Morales Arreola, head of operations for border crossings in Chihuahua state, said the border between Ciudad Juarez and El Paso had "collapsed" because so many US border officials have been reassigned to deal with the migrant influx.

Long lines have formed at the border since Thursday, with wait times of up to eight hours for those trying to cross.

Ciudad Juarez Mayor Armando Cabada Alvidrez called on the city's bustling manufacturing sector to temporarily cut back shipments to the US in order to reduce the backup.

However, White House chief economist Larry Kudlow said they were working to minimise the economic impact from a closure of the border -- including keeping truck lanes open.

"The question is, can we deal with that and not have any economic damage?" he told CNBC television.

"I think the answer is we can and people are looking at different options, particularly if you can keep those freight lanes, those truck lanes open."