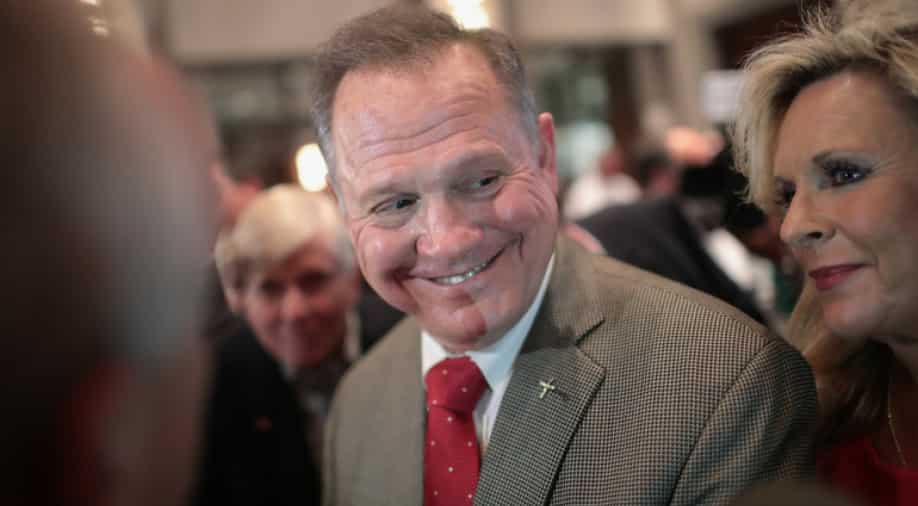 Republican candidate for the U.S. Senate in Alabama, Roy Moore speaks to reporters at an election-night rally Photograph:( AFP )

Donald Trump's pick in the Alabama Republican Senate runoff crashed to defeat Tuesday against a populist former judge, likely sending shockwaves through establishment Washington and denting the president's influence over his restless political base.
The result is an embarrassing setback for Trump that highlights the deep divisions within his party and raises questions about its future direction as the GOP heads toward mid-term elections in 2018.

It also signals that many in the grassroots conservative movement that helped propel Trump to the White House are still fighting against the party leadership and its grip on Washington politics during a turbulent period in which Republicans have struggled to deliver on key campaign promises like health care reform.

With 65 out of 67 counties reporting, former Alabama state chief justice Roy Moore led incumbent Luther Strange by 54.9 per cent to 45.1 per cent.

Strange was appointed to the US Senate earlier this year to fill the seat vacated by Jeff Sessions, whom Trump picked to be his attorney general.

Moore hailed his win as a "conservative victory" for his state.

"Because of you, tonight, the establishment has been DEFEATED in Alabama!" he posted on Twitter.

Moore now becomes the heavy favorite in Alabama's special election to be held in December against Democratic nominee Doug Jones.

Trump offered his own congratulations to Moore, urging him in a tweet to "WIN in Dec!"

While Trump may be shifting his support to outsider Moore, the race in Alabama, in the heart of the Deep South, was the latest political battleground over the direction that the Republican leadership is taking the party in Washington.

In a political twist, the race was the stage for a proxy war of sorts between Trump and his recently ousted White House chief strategist Steve Bannon, who backed Moore.

Trump was hoping to win a loyalist in Strange, 64, who has openly backed Trump's agenda.

But Trump's conservative base has signaled for months that it is not beholden to Republican leaders in Washington, and they could even break with the president in the Alabama race.

Trump hedged his bets last Friday, suggesting in a campaign appearance in Alabama that he "might have made a mistake" in endorsing Strange over Moore.

"If his opponent wins, I'm going to be here campaigning like hell for him" in the general election, Trump said.

Moore has threatened to upend the Republican Party should he win the race, and has branded his opponent an "establishment lackey" to Senate Majority Leader Mitch McConnell.

He is a fierce enemy of McConnell, accusing him of rejecting conservative efforts to pull the agenda further to the right.

"You're going to see it state after state after state, people that follow the model of judge Moore, that do not need to raise money from the elites, from the crony capitalists, from the fat cats in Washington, DC, New York City, Silicon Valley," he told Moore supporters at a victory rally in Alabama.

Moore is the more Trump-like of the candidates: opinionated, unconcerned about whom he may offend and desperate to upend the elite system that rules the US capital.

"For whatever reason, God has put me in this election at this time, and all the nation is watching" the Alabama race, Moore said Monday night in his final campaign rally before the primary election.

Bannon, who campaigned with Moore on Monday, joined in the Washington bashing, accusing party elites of thinking Alabama voters are nothing but "a pack of morons."
Alabama has not elected a Democrat to the Senate in a quarter century, so Moore is expected to become Alabama's next senator.

The 70-year-old was twice suspended from the Alabama Supreme Court for refusing to issue marriage licenses to same-sex couples and fighting against orders to remove a 10 Commandments monument from the court house.

His defiance made him a local hero to many, and that anti-establishment streak was on display Monday, when Moore, wearing a cowboy hat and vest, pulled a small pistol from his pocket and brandished it briefly before the crowd to show his support for gun rights.