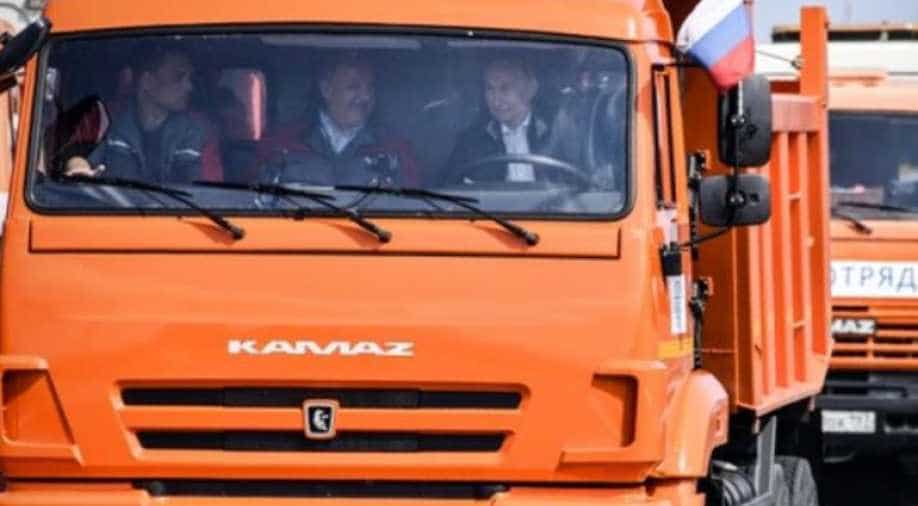 Putin, at the wheel of an orange heavy KAMAZ dump-truck, drove the full 19 km (12 miles) across the bridge from the Kerch Strait

Putin, at the wheel of an orange heavy KAMAZ dump-truck, drove the full 19 km (12 miles) across the bridge from the Kerch Strait. Some Russians are calling it "Putin's bridge", designed to link Crimea into Russia's transport network.

At a ceremony broadcast live on state TV, Putin, dressed in blue jeans, was met by cheering workers on the Crimean side after driving the truck across the bridge in a convoy of vehicles.

"At last, thanks to your talent, this project, this miracle, has happened," Putin told the workers.

In Kiev, Ukrainian President Petro Poroshenko said: "The illegal construction of the Kerch bridge is the latest evidence of the Kremlin's disregard for international law.

"It is particularly cynical that its opening is happening on the eve of the latest anniversary of the deportation of the Crimean-Tatar people by the Stalin regime."

Russia annexed Crimea from Ukraine in 2014, drawing sanctions and prompting a deterioration in ties with the West. Many in Russia saw the move as restoring Moscow's rule over a historically Russian region.

Built at a cost of 223 billion roubles ($3.60 billion), the bridge will be the longest dual-purpose span in Europe. The Kremlin said it would be opened to cars on Wednesday and the rail section was due to be completed at the end of 2019.

"Putin initiated this project himself. Many didn't believe these plans were possible," Kremlin spokesman Dmitry Peskov told reporters on Tuesday ahead of the ceremony.

"This is an extremely important day from this point of view and in a practical sense and in symbolic terms."

The road stretch of the bridge was due to be completed by the end of 2018, but the opening was brought forward at Putin's request.

Putin inspected the bridge in March ahead of the presidential election he won by a landslide, saying it was important to have the link to the Black Sea peninsula open for the summer tourist season.

The opening ceremony drew criticism from the West.

"France condemns the construction by Russia of the Kerch Bridge, which deprives Ukraine of full access and the use of its internationally recognised territorial waters," a French Foreign Ministry spokeswoman said.

The spokesperson of the European External Action Service said in a statement on Tuesday the bridge was "another violation of Ukraine's sovereignty and territorial integrity."

"The European Union continues to condemn the illegal annexation of Crimea and Sevastopol by Russia and will not recognise this violation of international law," the spokesperson said.