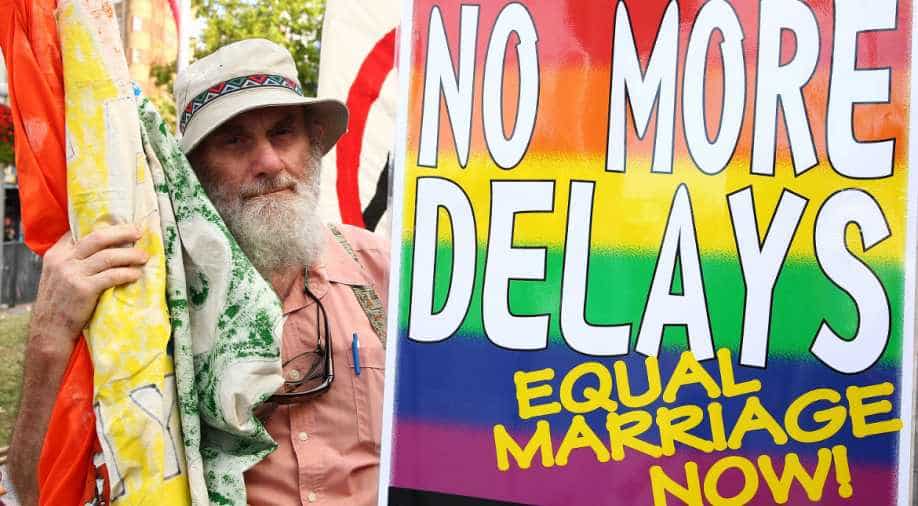 Turnbull has pledged a public vote on the issue of gay marriage before the end of 2016 while the Labour Party said it will directly introduce the bill in the parliament within 100 days if they win. Photograph:( Getty )

Conservative Australian Prime Minister Malcolm Turnbull supports same-sex marriage and has pledged a public vote on the issue before the end of 2016.

The Labour opposition will skip a public vote and introduce a bill to parliament within 100 days if it wins the election.

Opinion polls say Turnbull's Conservative coalition and Labour are neck-and-neck ahead of the election.

Some dressed up in costumes of former prime minister Tony Abbott, an opponent of same-sex marriage, who Turnbull ousted in a party room coup last September.

Openly-gay Labour candidate Pat O'Neill, who marched in Brisbane, said the election will give the gay community a "voice at the ballot box", reported Australian Associated Press (AAP).

Greens senator Larissa Waters told the crowd a public vote was a waste of time. "It's not going to be binding on their (government) members - what a joke," said Waters, reported AAP.

Australia has been criticised by international human rights groups over its slowness to act on same-sex marriage. Several countries, including Canada, the United Kingdom, United States, France, New Zealand, Ireland, and South Africa, have already amended their marriage laws to recognise same-sex unions.

Australia has seen a revolving door of political leadership in recent years. If Turnbull loses on July 2, the change in prime minister would be the fifth since 2010.