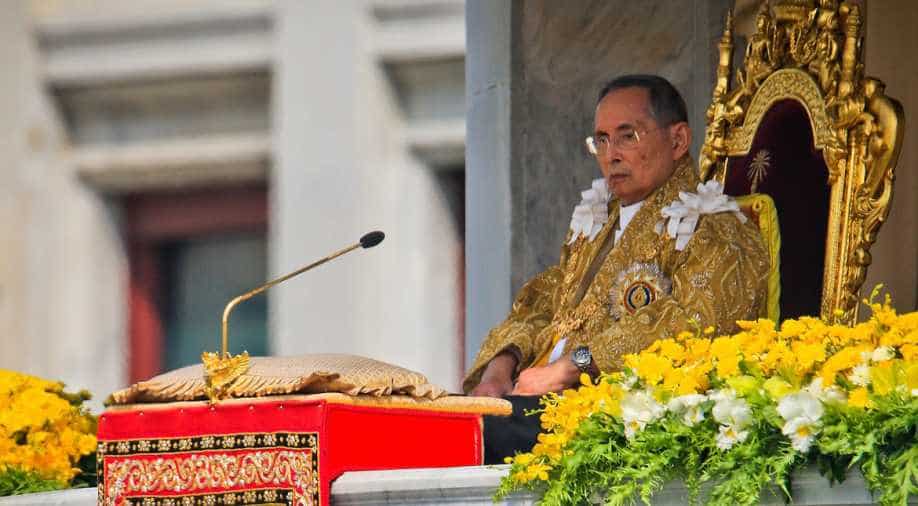 King Bhumibol Adulyadej died on 13 October, ending a remarkable seven-decade reign and removing a key pillar of unity in a bitterly divided nation. Historically, the new monarch in Thailand is only crowned once the previous monarch is cremated. Photograph:( Getty )

The country has been plunged into mourning since widely revered King Bhumibol Adulyadej died on 13 October, ending a remarkable seven-decade reign and removing a key pillar of unity in a bitterly divided nation.

Tuesday's move ends a period of uncertainty sparked by the junta making the surprise announcement after Bhumibol's death that the prince had asked to delay his official proclamation so he could mourn.

"I will invite the Crown Prince Maha Vajiralongkorn to succeed to the throne and become king of the Thai people," Pornpetch Wichitcholchai, head of the rubber stamp National Legislative Assembly said.

Lawmakers then stood up and replied: "Long live the king".

According to protocol, the assembly speaker will now seek a royal audience with the prince to invite him to ascend the throne, the last step before being proclaimed the new monarch.

Prawit said that would likely happen "either tomorrow or the day after".

Vajiralongkorn, 64, has been the named successor to Bhumibol for more than four decades.

He spends much of his time outside the kingdom, particularly in southern Germany where he owns property.

A military source told AFP the prince was still currently in Germany.

Shielded from criticism
He will soon inherit one of the world's richest monarchies, an institution protected by a tough royal defamation law.

That law makes open discussion about the royal family's role all but impossible inside the kingdom and convictions have skyrocketed since generals seized power in 2014.

But over his seven-decade reign, Bhumibol built up a powerful network of alliances, especially within Thailand's military elite, and forged a reputation as an arbiter in times of crisis.

Yet the late king has left his son with a sharply divided country.

Thailand's last decade has seen a cycle of political protests, coups by an arch-royalist military while inequality has deepened.

Vajiralongkorn, a certified pilot, has yet to achieve his father's widespread adoration.

Rumours over his private life have also trailed him. He has had three high-profile divorces, while a recent police corruption scandal linked to the family of his previous wife allowed the public a rare glimpse of palace affairs.

Since Bhumibol's death, he has attended some of the daily funerary rites for his father but has made no public statements.

He has asked his younger sister, Princess Sirindhorn to oversee the organisation for Bhumibol's cremation, which will not take place until an official one year mourning period has ended.

Historically, the new monarch in Thailand is only crowned once the previous monarch is cremated.