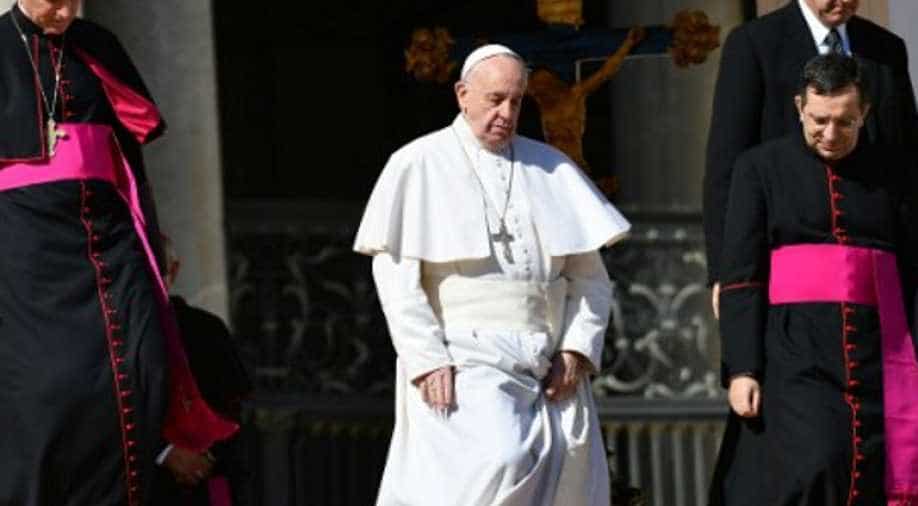 In her resignation letter, Collins said she believed Francis had acted sincerely when he set up the panel in March 2014 with a brief to advise him on concrete steps to ensure the safety of minors within Catholic institutions. Photograph:( AFP )

Collins's departure and her depiction of high-level obstruction of change is an embarrassing blow to the pontiff's attempts to demonstrate that the Church is effectively combating a scourge that has profoundly damaged its image over recent decades.

The 70-year-old, who was raped by a hospital chaplain at 13, explained her decision in an article for the National Catholic Reporter (NCR).

"As a survivor I have watched events unfold with dismay," she wrote.

Her resignation happened days after Francis came under fire for reducing sanctions imposed on some paedophile priests in line with his desire for the Church to be more merciful across a range of issues.

Collins's departure leaves the Pontifical Commission on the Protection of Minors with no abuse survivors working for it.

Briton Peter Saunders was sidelined last year after a row over the panel's handling of allegations of serial abuse by an Italian priest that were brought to its attention.

He described Collins's departure as "sad but somewhat inevitable".

"For the Commission it is a disaster to have no survivors represented. It has blown a huge hole in its credentials," he told AFP.

In her resignation letter, Collins said she believed Francis had acted sincerely when he set up the panel in March 2014 with a brief to advise him on concrete steps to ensure the safety of minors within Catholic institutions.

"However, despite the Holy Father approving all the recommendations made to him by the Commission, there have been constant setbacks," she said.

"This has been directly due to the resistance by some members of the Vatican Curia (administration) to the work of the Commission. The lack of co-operation, particularly by the dicastery (Vatican ministry) most closely involved in dealing with cases of abuse, has been shameful."

Collins said the final straw came in January when officials refused to guarantee that all letters from victims/survivors would receive a response or to cooperate with the commission on developing safeguarding guidelines.

"It is a reflection of how this whole abuse crisis in the Church has been handled: with fine words in public and contrary actions behind closed doors," she wrote in her NCR article.

Another panel member, German priest and academic Hans Zollner, said that while he understood his colleague's frustration, reformers had to be realistic about the pace of change.

"This is a long-term education job," he told AFP.

Saunders, who was asked to leave the commission last year after denouncing it as an exercise in window dressing, said it needed "an injection of outside blood".

He added: "Unless Francis pulls his finger out and gets rid of some people nothing is going to change. Will he do that? That is the big question. But he really needs to sit down with survivors and child protection experts and talk with them about what needs to happen."

Since his election in 2013, Francis has repeatedly promised to root out abusers, once describing their actions as comparable to participating in a Satanic mass.

He has also attempted to end what critics say is a cover-up culture, notably by introducing new rules allowing for negligent bishops to be dismissed over abuse cases in their dioceses.

In his most recent comment on the issue, in a December letter to bishops, he called for a renewed commitment to "zero tolerance," implicitly acknowledging much remains to be done.

And last week's confirmation that Francis had authorised a reduction of sanctions imposed on some paedophile priests triggered fresh accusations of complacency.

"Pope Francis needs to remember that there is a difference between crime and sin," said Joelle Casteix of the US survivor network SNAP.

"The place for mercy is with victims and children, not offending clergy."