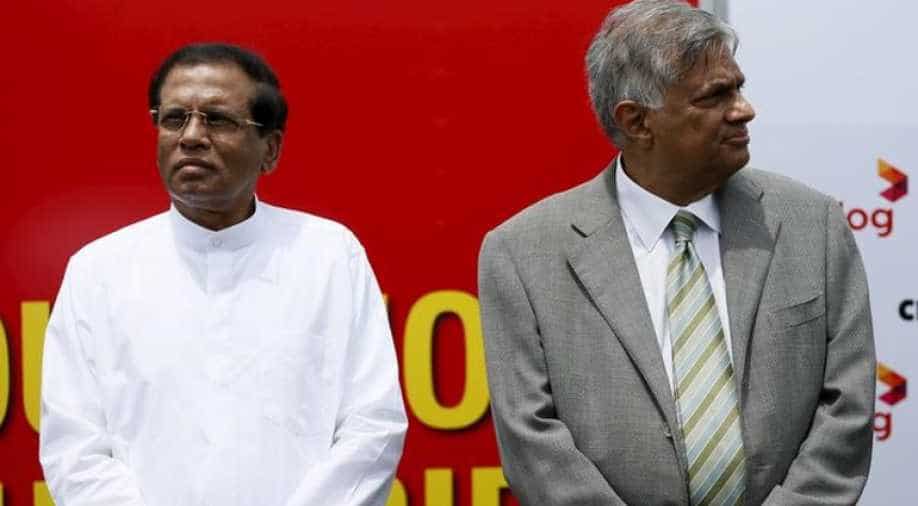 Sri Lankan Prime Minister Wickremesinghe and President Sirisena stand next to each other in Colombo. Photograph:( Reuters )

In what opponents condemned as an illegal move, Sirisena dissolved parliament on Friday and announced a January election after it became clear his designated prime minister -- former president Mahinda Rajapakse -- would not be able to command a majority in the current legislature.

Rakapakse and ousted premier Ranil Wikremesinghe, who has refused to leave his post, have been battling for power for two weeks as international concern grows over the mounting turmoil in the strategically important island nation.

In a bid to head off any revolt against his action he also suspended parliament.

There was no immediate comment from Wickremesinghe, but his United National Party (UNP) said it will challenge Sirisena's sacking of the legislature.

"This dissolution by the President is illegal and goes against the constitution," the UNP said on Twitter. "We will be fighting this to ensure that democracy reigns supreme in the country."

"He has robbed the people of their rights and the democracy that we have enjoyed," the UNP said.

Sirisena had come under increased international pressure from the United States, the United Nations and the European Union to allow parliament to vote on which prime minister should form a government.

"The US is deeply concerned by news the Sri Lanka parliament will be dissolved, further deepening the political crisis," the US State Department said in a statement on Twitter.

"As a committed partner of Sri Lanka, we believe democratic institutions and processes need to be respected to ensure stability and prosperity," it said.