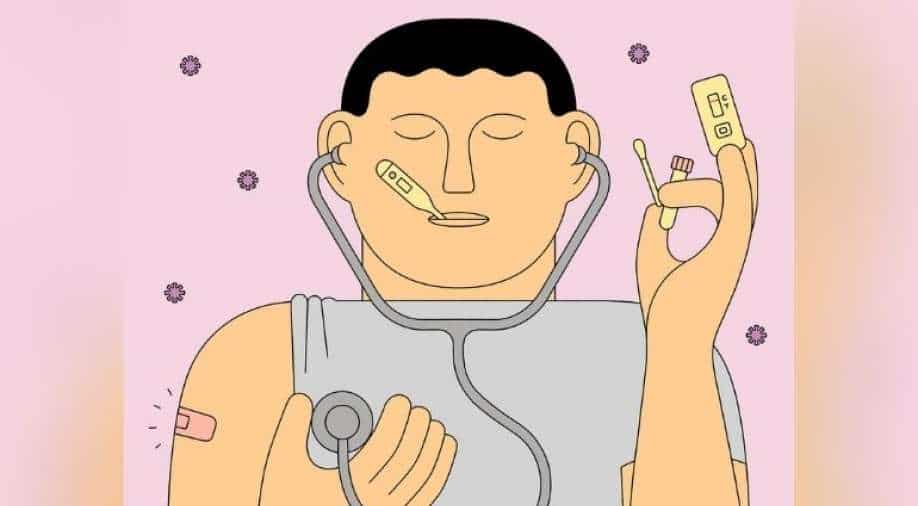 Many people are now coming to their own conclusions about Covid Photograph:( The New York Times )

Many people are now coming to their own conclusions about Covid and how they should behave. After not contracting the virus after multiple exposures, they may conclude they can take more risks. Or if they have Covid they may choose to stay in isolation longer than the CDC recommends

Lauren Terry, 23, thought she would know what to do if she contracted COVID-19. After all, she manages a lab in Tucson, Arizona, that processes COVID tests.

But when she developed symptoms on Christmas Eve, she quickly realized she had no inside information.

“I first tried to take whatever rapid tests I could get my hands on,” Terry said. “I bought some over the counter. I got a free kit from my county library. A friend gave me a box. I think I tried five different brands.” When they all turned up negative, she took a PCR test, but that too, was negative.

With clear symptoms, she didn’t believe the results. So she turned to Twitter. “I was searching for the omicron rapid test efficacy and trying to figure out what brand works on this variant and what doesn’t and how long they take to produce results,” she said. (The Food and Drug Administration has said that rapid antigen tests may be less sensitive to the omicron variant but has not identified any specific tests that outright fail to detect it.) “I started seeing people on Twitter say they were having symptoms and only testing positive days later. I decided not to see anybody for the holidays when I read that.”

She kept testing, and a few days after Christmas she received the result she had expected all along.

Though it’s been almost two years since the onset of the pandemic, this phase can feel more confusing than its start, in March 2020. Even PCR tests, the gold standard, don’t always detect every case, especially early in the course of infection, and there is some doubt among scientists about whether rapid antigen tests perform as well with omicron. And, the need for a 10-day isolation period was thrown into question after the Centers for Disease Control and Prevention announced that some people could leave their homes after only five days.

“The information is more confusing because the threat itself is more confusing,” said David Abramson, who directs the Center for Public Health Disaster Science at the NYU School of Global Public Health. “We used to know there was a hurricane coming at us from 50 miles away. Now we have this storm that is not well defined that could maybe create flood or some wind damage, but there are so many uncertainties, and we just aren’t sure.”

Many people are now coming to their own conclusions about COVID and how they should behave. After not contracting the virus after multiple exposures, they may conclude they can take more risks. Or if they have COVID they may choose to stay in isolation longer than the CDC recommends.

And they aren’t necessarily embracing conspiracy theories. People are forming opinions after reading mainstream news articles and tweets from public health researchers; they are looking at real-life experiences of people in their networks.

Still, this isn’t the same as following scientifically tested advice from experts, Abramson said. “A lot of it is anecdotal, and to say, ‘My brother-in-law did this and it worked for him, so I’m going to do it too,’ that is a poor use of probabilistic thinking,” he said.

And the people cobbling together their own guidance aren’t always looking for shortcuts. Reagan Ross, 26, who lives in San Jose, California, and is completing her doctorate in the department of communication at Stanford University, was recently asked on a date.

She had been isolating for 13 days after getting the virus, longer than the CDC’s guidelines, and no longer has any symptoms. But she decided she wouldn’t go on the date until she gets a negative antigen test.

“Some of my family members think I’m crazy,” she said. “But my date understands. He is not interested in getting COVID.”

(Abramson said you can’t go wrong by being too cautious. “If you are very cautious the odds are with you,” he said.)

Alexa Winter, 18, who works for Nordstrom Rack and lives in Minneapolis, wanted to stay home for the correct number of days, but she was confused about what that was after reading the CDC website. “I looked at the official CDC guidelines, but it was so muddled,” she said. “I couldn’t tell if it was five days or 10 days.”

Abramson said the five-day guidance “has too much ambiguity.” “I would have preferred much clearer guidance,” he said.

Vince Hulett, 35, who works in digital marketing and lives in Ballwin, Missouri, believes it is his combination of vaccines — two Pfizer shots and a Moderna booster — that has protected him against COVID thus far. He decided to get a different booster vaccine after reading early studies that suggest the mixture may offer more protection than getting three shots of the same vaccine.

When most of his family contracted COVID over Christmas, it only made him more confident in his decision.

“I had a huge COVID outbreak in my family over Christmas. My dad and mom got it, my two daughters, my brother, his wife and their two kids,” he said. He and his wife, he said, were among the few who didn’t get it. “I 100% think my vaccine combo protected me.”

Syl Tang, a futurist, said almost everyone she knows has come to her with theories about what they think is happening right now in the pandemic.

“Everybody just wants to find a way to feel good about their choices and make sense about this world we live in right now,” she said.