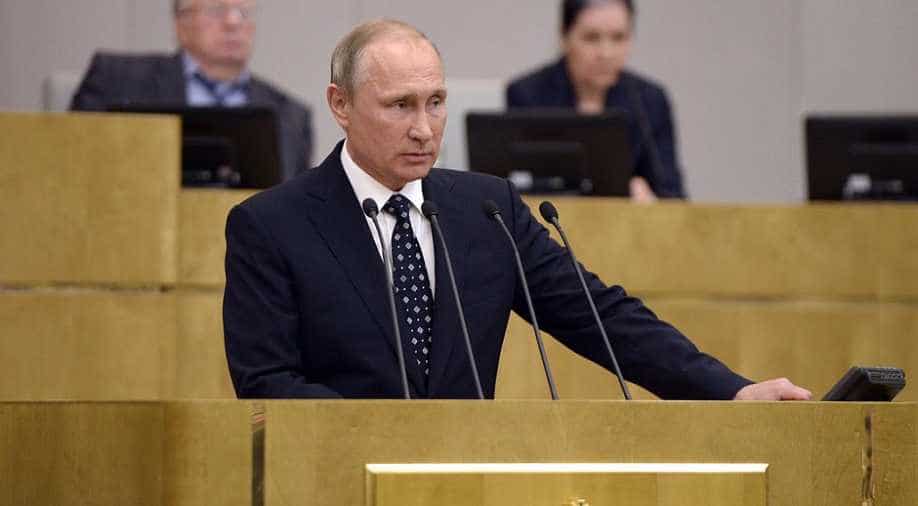 Russian President Vladimir Putin speaking at the first meeting of the State Duma of the seventh convocation. Photograph:( Others )

Russian lawmakers will vote next week on measures banning all US media from the lower house of parliament, a deputy said Friday, in response to the US Congress stripping state channel RT of its credentials.

A senior United Russia party lawmaker Olga Savastyanova said the Russian Duma will vote on the ban on December 6. It is unlikely that the proposal would be rejected by the overwhelmingly pro-Kremlin assembly.

"The ban will impact all American media," she said, according to the Duma's official website.

There are 21 American media outlets accredited to work in Russia, according to the website of the foreign ministry which keeps the register and issues documents to journalists.

"After the decree regarding closing access for American journalists to the Duma building is passed, we will work out all organisational and technical issues with the foreign ministry," Savastyanova said.

The ban would apply to US media rather than journalists from other foreign countries, Kremlin spokesman Dmitry Peskov said.

"Such outrageous attacks on foreign media, in particular Russian media, go against the international practice of freedom of speech and unfortunately flourish in full Technicolor in the US," he said.

The ban would be the latest development in tit-for-tat fallout from Washington's forced registration of RT as a "foreign agent" in the US.

Washington views the channel as a propaganda arm of the Kremlin, which is accused of interfering in the presidential elections last year.

The congressional committee of journalists which regulates who is accredited to cover the legislature said Thursday they voted unanimously to withdraw RT's press pass.