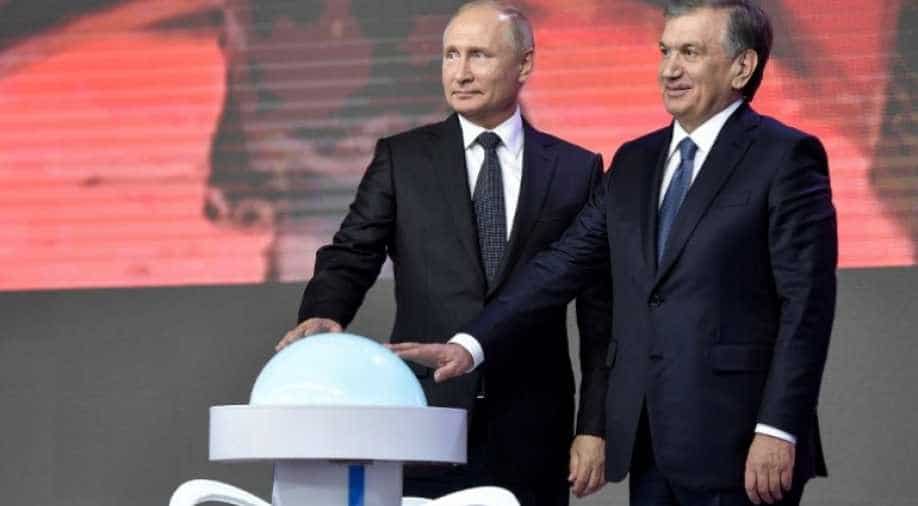 Russian President Vladimir Putin (L) and President of Uzbekistan Shavkat Mirziyoyev, inaugurate the construction of the first nuclear power plant, during a forum of inter-regional cooperation between Russia and Uzbekistan in Tashkent. Photograph:( AFP )

Russian President Vladimir Putin was paying a first state visit to Uzbek counterpart Shavkat Mirziyoyev since Mirziyoyev replaced the late Islam Karimov, who ruled for nearly three decades before his death in 2016.

Russia and Uzbekistan on Friday hailed the construction of an $11 billion nuclear power plant that should help solve an energy deficit in the Central Asian country while binding it tighter to Moscow politically.

Russian President Vladimir Putin was paying a first state visit to Uzbek counterpart Shavkat Mirziyoyev since Mirziyoyev replaced the late Islam Karimov, who ruled for nearly three decades before his death in 2016.

During the visit the two countries signed deals worth $27.1 billion, according to the Uzbek economy ministry.

"Uzbekistan is our loyal ally and our strategic partner... We will do all we can to strengthen our cooperation," Putin said while meeting Uzbek counterpart Shavkat Mirziyoyev in the capital Tashkent.

"Dear Russian friends, welcome to Uzbekistan!" read billboards along the main roads of Tashkent where Russian and Uzbek flags flew side by side.

The nuclear power plant, set to be completed by 2028, has strategic significance for Moscow which is looking to reassert its economic and political clout in Central Asia amid fierce competition from China and other players.

According to the Russian Rosatom nuclear energy agency overseeing the project the plant's output should account for a fifth of Uzbekistan's overall power generation.

Putin suggested on Friday that the facility -- the first of its kind in ex-Soviet Central Asia -- might also help provide power to other countries in the region where the Chernobyl disaster and Soviet-era atomic weapons testing in the Kazakh steppe have coloured attitudes towards nuclear power.

Addressing the two leaders via tele-link from the western region of Navoi where the plant is set to be built, Rosatom chief Alexey Likhachev assured Uzbekistan that the plant would be built in strict accordance with international standards.

"The main criteria here is safety," Likhachev said at a ceremony marking the start of the project.

Bilateral trade between Russia and Uzbekistan jumped by more than a third year-on-year to $3.7 billion in 2017 as Uzbekistan shakes off nearly three decades of economic isolation under Karimov's rule.

Karimov, who died in 2016, maintained generally good relations with Moscow but was wary of the Kremlin's influence over Uzbekistan and the Central Asian region.

Mirziyoyev, who served as Karimov's prime minister for 13 years, has kept the authoritarian regime intact while also reversing some of his predecessor's most controversial policies.

Putin on Friday paid tribute to reforms launched by Mirziyoyev that have whetted the appetites of foreign investors eyeing new markets in a commodity-rich country of around 33 million people.

"We see how quickly and how fundamentally the situation in Uzbekistan is changing, how reforms are being organised and carried out," Putin said.

Under Mirziyoyev, the government has overhauled its foreign exchange policies, pledged to modernise its banking system and re-launched ties with the European Bank for Reconstruction and Development that were effectively severed more than a decade ago.

Among the other economic agreements signed at a business forum running parallel to the two leaders' talks was a memorandum of understanding between Russia's Lukoil energy major and Uzbek state energy company Uzbekneftgaz.

Security was also high on the agenda during talks between the two heads of state.

Under Mirziyoyev, Uzbekistan has declared its readiness to host talks between the Taliban and the government of Afghanistan, with whom Uzbekistan shares a border.

"It is in our common interest to normalise the situation in Afghanistan," Putin said, backing the initiative.