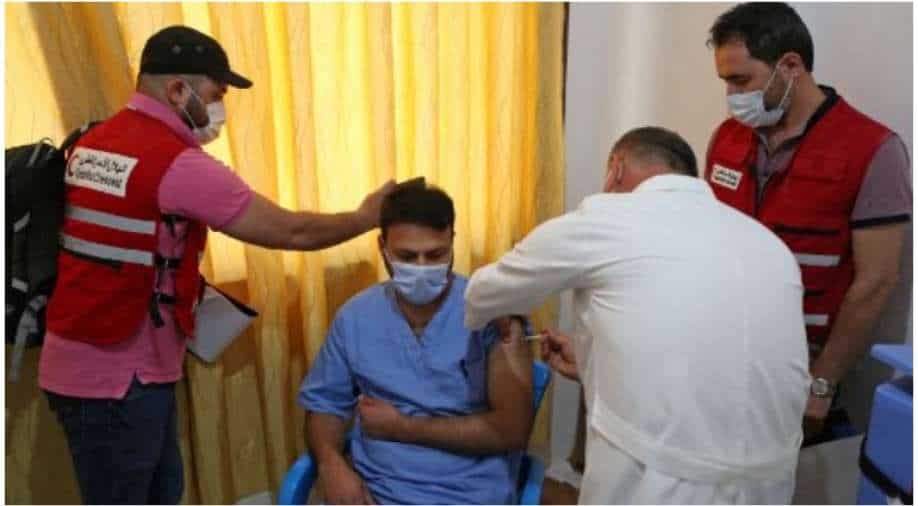 A medical worker receives a dose of the AstraZeneca COVID-19 vaccine in the presence of Qatar Red Crescent personnel at the Ibn Sina Hospital in Syria's northwestern Idlib city on May 1, 2021. Photograph:( AFP )

The provinces have received initial batches of vaccines

Vaccine rollout began in the rebel-held part of northern Syria and residents received Covid vaccines on Saturday, said AFP. Authorities in Idlib and northern Aleppo received an initial batch of 53,800 AstraZeneca Covid-19 jabs on April 21, under the Covax programme for poorer nations.

In Idlib, a doctor was the first to receive the vaccine at Ibn Sina children's hospital, one of the city's biggest medical facilities.

Yasser Najib, the head of a committee running the vaccine drive, said the first doses would go to medical staff at Ibn Sina and the national hospital in Azaz, in northern Aleppo.

He said that by Monday the campaign would reach "all medical facilities, including those in the camps" on the border with Turkey, which shelter hundreds of thousands of displaced people.

Humanitarian workers are also among the first to be inoculated. This will be followed by the elderly and people with chronic diseases.

The committee said it had set up more than 90 mobile teams to administer the vaccines.

The area, which hosts some four million people, has recorded over 21,000 cases of Covid-19 including 641 deaths.

"The aim... is to vaccinate 20 percent of the population of northwestern Syria, so around 855,000 people," said Najib.

Last month, Damascus received an initial batch of 203,000 AstraZeneca vaccine doses, out of 912,000 it is set to receive for distribution in government and Kurdish-dominated parts of Syria.

The World Health Organization is hoping a fifth of Syria's population will be vaccinated by the end of the year.

Syria's civil war has killed more than 388,000 people and displaced millions at home and abroad since starting in 2011 with the brutal repression of anti-government protests.