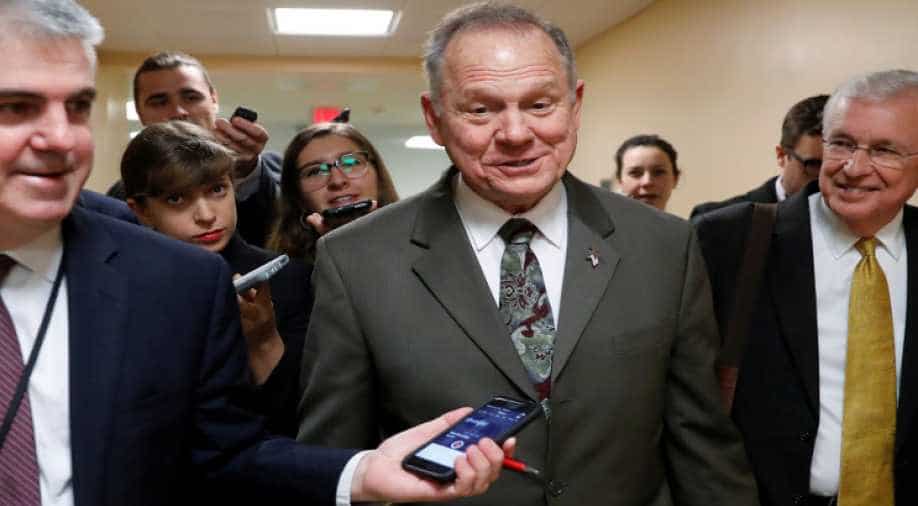 A Republican Senate candidate reported to have sexually abused a 14-year-old girl lashed out at his accusers Friday, calling their allegations a "dangerous lie" that would harm real victims of molestation.

Roy Moore a former state judge and Christian evangelical whose defense of a Ten Commandments display brought him national attention added he had "never engaged in sexual misconduct."

The issue has reverberated through Washington weeks ahead of a crucial Senate election in which the conservative Republican party is hoping to hold on to its slim 52-48 seat majority.

Four women, speaking on the record, told The Washington Post that Moore pursued them when they were 18 or younger, while he was in his early thirties working as an assistant district attorney.

According to the Post, Leigh Corfman, now 53, said when she was 14 Moore took her into his house in the woods near Gadsden, Alabama, removed her shirt and pants, and fondled her over her bra and underpants.

Moore guided her to touch him through his underwear, she said.

"I wasn't ready for that," Corfman told the Post.

"I have never engaged in sexual misconduct," he said in a statement issued Friday that went beyond his campaign's earlier simple denial.

He also turned on his accusers, saying: "I cannot understand the mentality of using such a dangerous lie to try to personally destroy someone."

"False allegations are gravely serious and will have a profound consequence on those who are truly harassed or molested," he added.

Asked whether he remembered dating women in their teens when he was in his 30s, he said: "Not generally no."

He added: "I don't remember that, or dating any girl without the permission of her mother."

Earlier, President Donald Trump issued a statement that appeared to equivocate on the matter, saying Moore should step aside if the claims proved true, while adding that a mere allegation should not destroy the Alabama politician's life.

"Like most Americans the president believes we cannot allow a mere allegation, in this case one from many years ago, to destroy a person's life," White House press secretary Sarah Sanders said aboard Air Force One, before the president landed in Vietnam for a summit.

"However, the president also believes that if these allegations are true, Judge Moore will do the right thing and step aside," she said.

The accusations by the four women reverberated through Washington, with many traditional Republicans withdrawing their support for Moore -- though he has received considerable support in his native Alabama and from former Trump advisor Stephen Bannon.

"If these allegations are true, he must step aside," Senate Majority Leader Mitch McConnell said. At least a dozen other Republicans followed suit.

Senator John McCain, the 2008 Republican presidential nominee, declared the allegations "disqualifying" for Moore and called on him to immediately leave the race.

But in Alabama, state auditor Jim Zeigler brushed off the allegations.

He told the Washington Examiner "there is nothing to see here" -- and referred to the Bible as a defense.

"Take Joseph and Mary. Mary was a teenager and Joseph was an adult carpenter. They became parents of Jesus," Zeigler told the conservative news outlet. "There's just nothing immoral or illegal here."

Steve Bannon, a former strategist for Trump who has supported Moore since he announced his candidacy, told Bloomberg News: "This is nothing less than the politics of personal destruction," adding: "They need to destroy him by any means necessary."

The Post said it interviewed more than 30 people, including mothers and friends of the girls.

It detailed how Gloria Thacker Deason was 18 in 1979 when she and 32-year-old Moore began going on dates where they hugged and kissed, she told the Post.

Another woman, Wendy Miller, said she first met Moore when she was dressed as an elf and working as a Santa's helper at a shopping mall.

Later, in the presence of her mother, he asked her out on dates when she was 16. Her mother said no, and Miller said she realised years later that the idea of a grown man wanting to date a teenager was "disgusting."

Moore could have faced prison time, but the statute of limitations has expired, the Post reported.

A darling of US evangelical Christians, Moore had a controversial career as a judge, notably for refusing to remove a statue of the Ten Commandments in his court house.

He was twice suspended from his state's supreme court for ethics violations related to his order against issuing marriage licenses to same-sex couples, and has written that Muslims should not be allowed to serve in Congress.