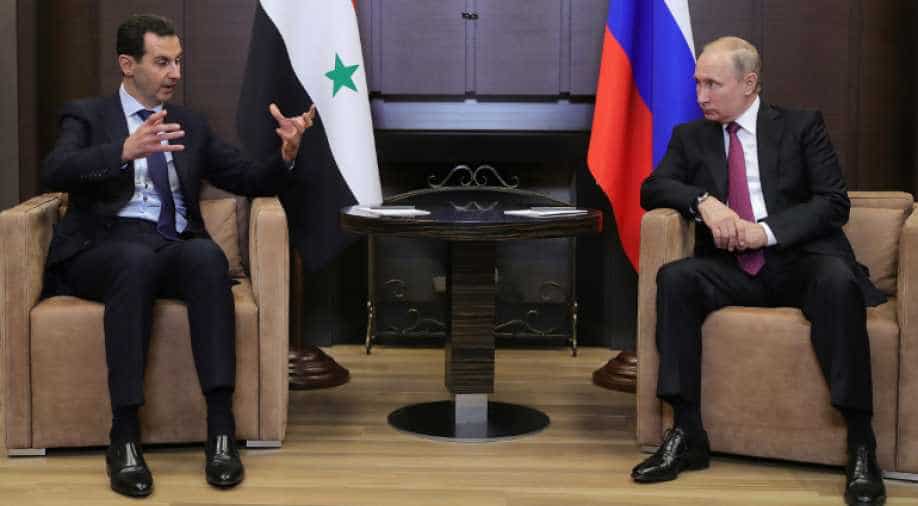 Russian President Vladimir Putin held a rare meeting with Syrian leader Bashar al-Assad on Thursday and said the "military success" in Syria allowed for a large-scale "political process" leading to the withdrawal of foreign forces and the reconstruction of the country.

A day after UN special envoy to Syria Staffan de Mistura warned a regime assault on the rebel-held area of Idlib could affect 2.3 million people, Putin met Assad in the southern Russian city of Sochi.

"After the success of the Syrian government army in the fight against the terrorists" the condition are in place for "the start of a political process on a major scale," Putin said in a statement released by the Kremlin following the meeting.

Kremlin spokesman Dmitry Peskov told reporters that "there were detailed discussions" between the two leaders, who last met in December at a Russian military air base in Syria's coastal province of Latakia.

"With the start of the political process in its most active phase, foreign armed forces will withdraw from Syrian territory," Putin said, without specifying which foreign forces.

Russia has been involved in Syria's civil war since September 2015. Its military support not only ensured the survival of Assad's regime but also changed the course of the war.

Putin also congratulated Assad on the "successes of the Syrian government's army in the fight against terrorist groups".

"The next task, of course, is the economic recovery and humanitarian aid for those people in a difficult situation," Putin added.

The latest round of Syria peace talks in the Kazakh capital Astana wrapped up on Tuesday&nbspbut did not,&nbsphowever, make any concrete progress towards ending the seven-year conflict that has cost 350,000 lives.

Russia, Iran and Turkey have been attempting to resolve the conflict in the talks that started last year in Astana in competition with a US and UN-backed Geneva initiative.

In a statement from the Syrian presidency, Assad added on Thursday "we have evaluated the political process" and will select candidates for a constitutional committee, a suggestion proposed in January at a summit in Sochi, that will work with the United Nations.

According to the Kremlin statement, Assad said "stability is improving" in Syria, "opening the door to the political process we started some time ago".

"We know it will not be easy because some countries do not want stability to return to Syria. But with you and other partners and friends, we will continue to make strong progress in the peace process," Assad was quoted as saying in the statement.

"Thanks to military successes, we are managing to normalise the situation in the country, opening the way for the return of many of our compatriots."

Regime forces recaptured Ghouta from rebels last month after a ferocious offensive that displaced tens of thousands, both to government-controlled zones around Damascus and to opposition-held parts of northern Syria.

De Mistura, speaking Wednesday to the UN Security Council's monthly meeting on the Syria conflict, described what he called the classic Syrian regime tactic of a bombardment of a rebel territory followed by negotiations and then mass evacuations from the defeated area.

But the special envoy noted that half of the people in the northern rebel province of Idlib had already fled from other parts of Syria, "and will have nowhere else to go because there is no other place to go."

Putin and Assad met on the eve of a meeting in Sochi between Putin and German Chancellor Angela Merkel, the first face-to-face talk of the year between the veteran leaders.