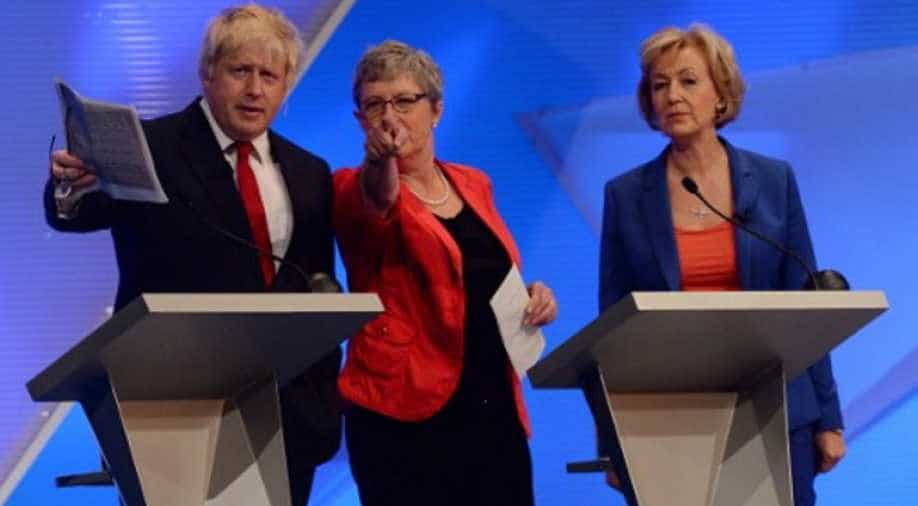 Andrea Leadsom (right) with Gisela Stuart and Boris Johnson before The Great Debate on EU referendum at Wembley in London on June 21. Photograph:(AFP)
Follow Us
British leadership contender Andrea Leadsom said the UK could pull out of the European Union as early as next year following last week's referendum vote to leave the bloc.

In an interview with the Sunday Telegraph, Leadsom said she had a fast-track policy for leaving and that only someone who had herself voted to leave the EU could be trusted to take the country out of Europe.

Limited extracts of the interview, without direct quotes on her comments about the timing of an exit, were released by the paper on Saturday.

Leadsom, 53, has emerged as the top pro-Brexit contender to succeed Prime Minister David Cameron as leader of the ruling Conservative party, according to newspapers.

The front runner, interior minister Theresa May, was a supporter of the campaign to stay in the EU, which some political analysts believe may count against her.

The newspaper quoted Leadsom, who is expected to announce her candidacy on Monday, as saying she admired the leadership qualities and toughness of former Conservative leader Margaret Thatcher who drove notoriously hard bargains with EU leaders during her time in office in the 1980s.

Cameron said he would resign following voters' rejection of his campaign to stay in the EU, and lawmakers have to whittle down the five contenders to replace him to just two before Conservative party members take a final vote, expected in early September.