It is predicted that 896 towns and villages across Japan will no longer be viable by 2040 (see map below or an interactive Japanese version here). A former minister for internal affairs, Hiroya Masuda, describes this as “local extinction”.

Visiting some of these towns and villages today is reminiscent of Alfonso Cuarón’s brilliantly observant movie Children of Men. The film is set in 2027, two decades after humanity has lost the ability to reproduce. Schools are dilapidated and their playgrounds forever quiet. Houses are empty and in disrepair.

While the situation in Japan is not as bleak (yet), Masuda notes that birthrates have fallen since the 1970s and currently stand at 1.4 children per family. The most recent projections indicate that the population will shrink by 27 million between 2015 and 2053. That’s equivalent to the entire population of Australia vanishing. 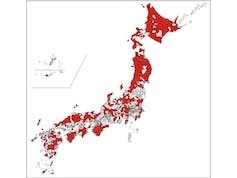 Japan is viewed around the globe as a cool, vibrant and extraordinary place. It attracts more than 24 million tourists each year, many of whom visit Tokyo, Osaka or Kyoto and then travel via bullet train to other major cities. This urban core is the centre of population, economic and cultural activity, and it is all that most tourists see.

Only when you travel to rural Japan do the impacts of population decline become apparent. Last year, I spent time in two rural prefectures.

Everyone in Japan is aware of the challenges posed by a rapidly ageing, declining population with low birth rates. The media cover these concerns extensively.

Local governments have been trying to encourage people to move back to rural areas by providing work opportunities and sharing details of vacant houses.

This internal migration is known as “U-turn” or “I-turn”. The former describes someone returning to their hometown, while the latter refers to a person who decides to quit big city life.

Relocating to a small rural community, however, can be challenging. Villages and towns are close-knit communities and the returnee is expected to comply with local norms.

The Japanese have an expression, Gō ni ireba gō ni shitagae, which is equivalent to “When in Rome do as the Romans do”. Failure to do so can result in the returnee being, to use an English idiom, “sent to Coventry”. The Japanese term is mura hachibu, and it means you will be ignored and excluded.

There are no simple answers to these challenges. The Japanese government has been very active but past policies have tended to focus on infrastructure development and construction of public facilities (roads, dams, town halls, libraries, museums, sports facilities), rather than on the economic needs and welfare of local people.

In this context, Masuda calls for a radical new approach with three core goals.

While lots of ongoing initiatives aim to attract young people back to rural areas, the biggest concern is one of livelihoods as long-term job prospects are limited. Yuusuke Kakei covers this topic in his 2015 book Population Decline x Design, presenting proposals for new local economic activity that puts women, creativity and community at the centre. To this we should add what Joseph Coughlin describes as “The Longevity Economy” to respond to the economic and technology needs of an aging population.

Interest in the notion of the universal basic income has also surged recently in Japan. Some commentators argue that it could play a significant role in revitalising Japan and in making rural life more attractive to young Japanese by providing them with long-term financial security.

One major challenge for local economies is access to finance, especially to support new businesses. While there are several innovative crowdfunding initiatives, Japanese municipalities should also look at the Transition Town movement for inspiration with its focus on “reclaiming the economy, sparking entrepreneurship, reimagining work”.

Specifically, it is worth exploring the potential of local entrepreneur forums. These bring together local investors from within the towns or villages with local entrepreneurs to support new, small business ventures.

The result is that communities pool their resources to support young people who have business ideas but lack financial resources. This is in line with both Masuda’s and Kakei’s recommendations to focus on local needs, rather than physical buildings and infrastructure.

While local communities search for a way forward, it is clear that Japan is leading the world in ageing, population decline and in how to respond. Many other countries are set to follow this path. We can all learn a great deal by closely examining Japan’s experience. 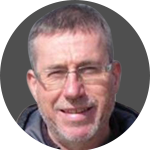