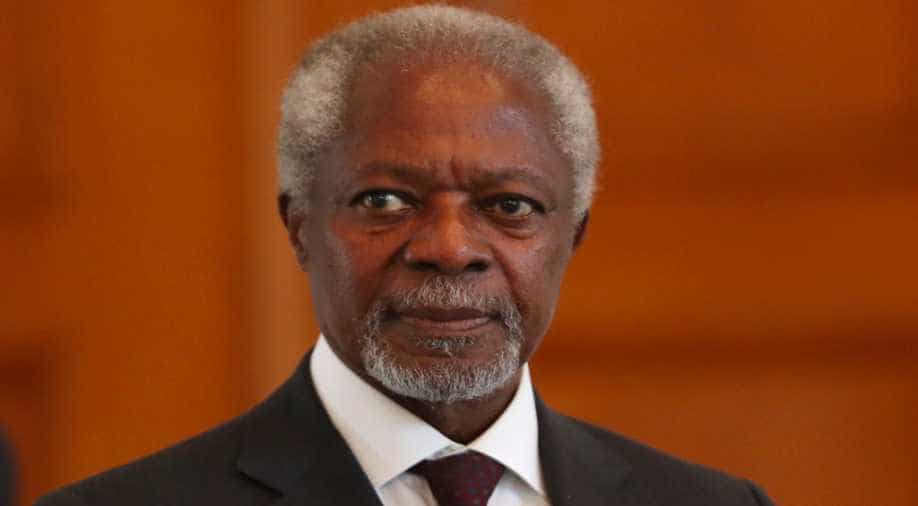 This is Annan?s second visit since Suu Kyi appointed him in August to head a special commission that will write and present a report of its findings to the government early next year. Photograph:( Getty )

Former UN Secretary-General Kofi Annan on Friday began a fact-finding visit to Myanmar's Rakhine province,where the army is being accused of violence against members of the Muslim Rohingya minority.

The escalation of violence in the region in the past few months has resulted in the destruction of villages, civilian casualties and an exodus of refugees to neighbouring Bangladesh.

Myanmar’s de-facto leader Aung San Suu Kyi has asked Annan to help find ways to resolve the  ethnic and religious tensions between the Rohingya and the country's Buddhist majority.

The region has witnessed large-scale intercommunal violence in 2012 that left hundreds dead and drove 140,000 people into camps for the internally displaced.

This is Annan’s second visit since Suu Kyi appointed him in August to head a special commission that will write and present a report of its findings to the government early next year.

The latest surge in violence was due to the attacks on Myanmar border posts on October 9 that left nine police officers dead.

The motive of the attack and the identities of the attackers are unclear, but in response, the government began military sweeps, leading to a major confrontation in November that saw villagers resisting government intrusion.

According to a tweet by a spokesperson for Annan’s foundation, the former UN chief said in Rakhine today that "security operations must not impede humanitarian access where there is need.", news agency AP reported.

"I'm not saying there are no difficulties," Suu Kyi told Singapore's Channel NewsAsia network today "but it helps if people recognize the difficulty and are more focused on resolving these difficulties rather than exaggerating them so that everything seems worse than it really is."

Suu Kyi, whose party came to power in March after years  of military-backed rule, has been criticized for not acting strongly to curb the violence against the Rohingyas, who generally are not allowed citizenship.