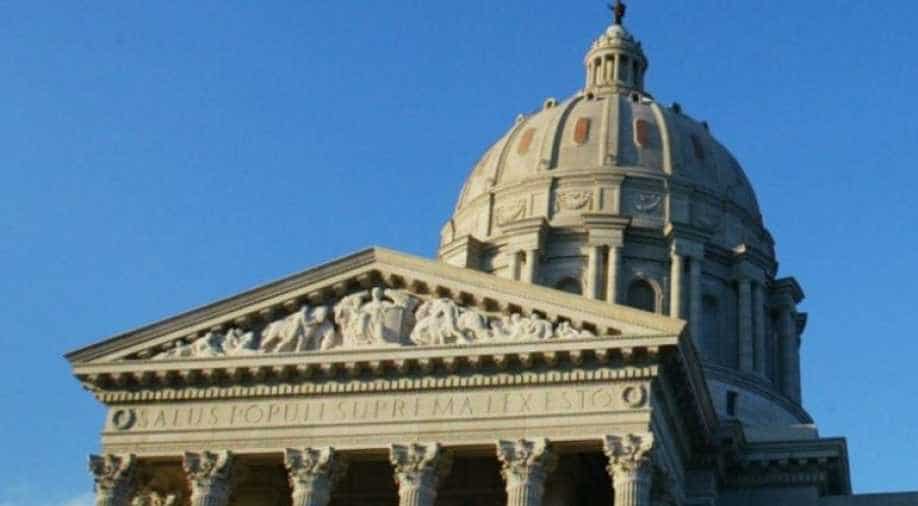 The Missouri State House is pictured in Jefferson City, Missouri, US. Photograph:( Reuters )

The vote came a day after Alabama`s governor signed into law the country`s most restrictive abortion bill, outlawing nearly all abortions, absent a medical emergency.

Missouri`s Senate passed a bill on Thursday to ban abortions eight weeks after conception, except for medical emergencies, the latest attempt in a Republican-controlled state legislature to restrict the rights of women to terminate their pregnancies.

The vote came a day after Alabama`s governor signed into law the country`s most restrictive abortion bill, outlawing nearly all abortions, absent a medical emergency.

The Missouri bill now goes back to the state House of Representatives, where it originated, for final legislative action. The House is expected to approve the bill.

The Alabama and Missouri measures, along with similar legislation proposed in more than a dozen other states, represent the latest efforts by political conservatives to challenge Roe v. Wade, the landmark US Supreme Court decision that legalized abortion nationwide.

The renewed push to overturn or roll back that 1973 decision comes after abortion foes were emboldened by President Donald Trump`s appointment of two new Supreme Court justices, giving conservatives a solid majority on the high court.

It also has thrust the emotional abortion debate back into the forefront of national politics in the run-up to the 2020 US presidential election, and at a time when rates of abortion have sharply declined.

The Missouri legislation, dubbed Missouri Stands for the Unborn bill, passed the Senate on a straight party-line vote, with 24 Republicans supporting it and 10 Democrats opposed.

Should the measure win final passage in the House, the ban would go into effect on Aug. 28, with or without the governor`s signature.

A WAVE OF STATE LEGISLATION

Governor Mike Parson, a Republican, is expected to the sign the bill, which he has said would make Missouri "one of the strongest pro-life states in the country."

The bill would outlaw abortion even in the case of rape or incest after eight weeks of pregnancy, with violations by doctors punishable by prison sentences, though women who seek out the procedure would not be subject to criminal prosecution.

The measure also would ban abortions altogether, except for medical emergencies, should Roe v. Wade be overturned.

As of May, legislation to restrict abortions has been introduced in at least 16 states this year. Governors in four of those states have signed bills into law banning the procedure if an embryonic heartbeat can be detected, generally considered to be as early as six weeks.

The recent flurry of statehouse action has reignited clashes between religious conservatives and others who say protections for the sanctity of life should extend to the unborn, and those, including civil libertarians, who see such measures as an infringement on the rights of women to control their own bodies.

Abortion-rights activists argue that rolling back 45 years of legal precedent to criminalize abortion would expose many women to dangerous health risks posed by illegal abortion providers.

Some Republicans pushing for abortion restrictions acknowledge they are doing so as a deliberate strategy of instigating court challenges that will ultimately force the US Supreme Court to reconsider Roe v. Wade.

Roe held that the due process clause of the 14th Amendment provides a fundamental right to privacy that protects a woman`s right to abortion.

It also allowed states to place restrictions on the procedure from the time a fetus could viably survive outside the womb, except in cases in which a woman`s health was otherwise at risk. The opinion stated that viability is usually placed at about seven months (28 weeks) but may occur earlier, even at 24 weeks. A full-term pregnancy typically is about 40 weeks.

Nearly one in four women in the United States will undergo an abortion by the age of 45, though the overall US abortion rate dropped by 25 per cent between 2008 and 2014 - from 19.3 to 14.6 per 1,000 women, according to Guttmacher Institute research published in 2017 in the American Journal of Public Health.

Guttmacher said available information suggested that improved contraceptive use, especially among young women who account for a third of unintended pregnancies, was a key factor.

Parson said the number of annual abortions in Missouri had fallen from a high of more than 20,000 to a recent all-time low of fewer than 3,000. He cited "decades of conservative pro-life leadership" for the decline.