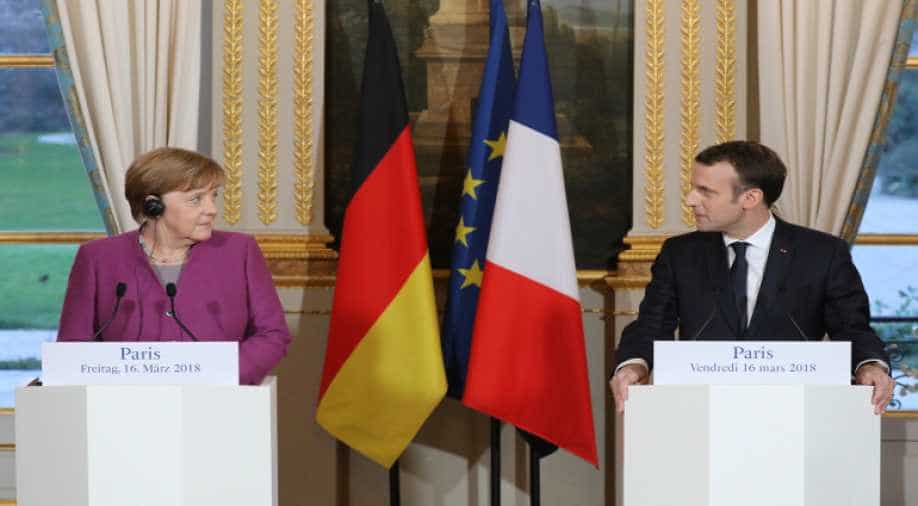 French President Emmanuel Macron and German Chancellor Angela Merkel on Friday pledged to overcome differences in order to formulate a roadmap for a reform of the euro zone which they will seek to get approved by their European peers in June.

Merkel, who was narrowly re-elected to a fourth term as chancellor, wants to fulfil her incoming government's pledge to deliver a "new start" for Europe. Macron, too, has made euro zone overhaul a central goal since taking power last May.

However, members of Merkel's conservative bloc are wary of more comprehensive European integration, especially if it means that Germany, Europe's economic powerhouse, would be pooling risks and debts with other, less financially stable countries.

"We are not always on the same page. But Germany and France have also achieved a lot in the past and now we have the firm intention to do that again," Merkel said as she met Macron for the first time since she formed a new coalition government.

The goal of the reform push has to be to stabilise the 19-country euro zone and improve its competitiveness of the single currency bloc, Merkel said, adding that it must also provide for more convergence on asylum policies.

"We'll put forward a clear, ambitious roadmap by June for this overhaul," Macron said, adding that the plan should also address further integration of the bloc on migration, defence and trade.

The roadmap will also touch on the banking union, budgetary issues, Europe's Stability Mechanism and tax convergence, a source in Macron's office said.

"Our aim is that the Europeans - at 27 for some issues, at 19 for what is euro zone-related - agree on a roadmap for euro zone reform and more broadly for growth and innovation," the source said after their meeting.

There is already substantial reform under way in the euro zone, including plans for a single deposit insurance scheme that would protect individuals' savings.

However, the appetite for deeper integration, such as Macron's grand ideas for a standalone euro zone budget, a single euro zone finance minister and a dedicated fund that would help countries facing external shocks, is limited.

The Netherlands and seven other EU states issued a joint statement in early March saying the first priority should be to ensure countries implement measures that have already been decided.

Macron, 40, has waited impatiently for the Germans to form a government and is itching to press ahead.

The chancellor, 63, knows that Macron, in his first term, needs to deliver on his promises, well aware that a large proportion of France's electorate remains susceptible to far-right and far-left populists who are sceptical about the EU.

In January, when they last met for formal discussions on the eurozone and Merkel was still negotiating over a coalition, the pair said they hoped to present their plans to member states at an EU summit in March.

But the next EU leaders' meeting in June now the new deadline.

"We must agree by June a Franco-German roadmap for the whole euro zone. It'll be very tough work," French Finance Minister Bruno Le Maire said after talks with his German counterpart, Olaf Scholz.

Yet, even if they can get the 17 other euro zone members to agree to further reforms -- how better to deploy their 500 billion euro ESM rescue fund -- there will be a tight schedule to implement those changes before the EU has to tackle its next big challenges: Britain's formal exit from the union in March 2019 and European Parliament elections shortly afterwards.