Russia foreign minister slams US sanctions during visit to Venezuela "We have agreed to deepen our economic, commercial and investment cooperation in several areas despite the illegitimate sanctions," Lavrov said.

Russia's foreign minister on Friday slammed US sanctions against Venezuela during a visit to Caracas, providing a public show of support for President Nicolas Maduro as Washington mulls ramping up pressure on the South American nation.

Sergei Lavrov arrived in Caracas on Thursday, only hours after the US State Department suggested its Venezuela sanctions program could begin targeting Russia, whose oil companies have helped Maduro by buying much of the OPEC nation's crude.

Assistance from Russia could be decisive for Maduro to boost oil production and restore economic growth after a surprise opening of the economy last year that followed years of hyperinflation and the exodus of 5 million people. 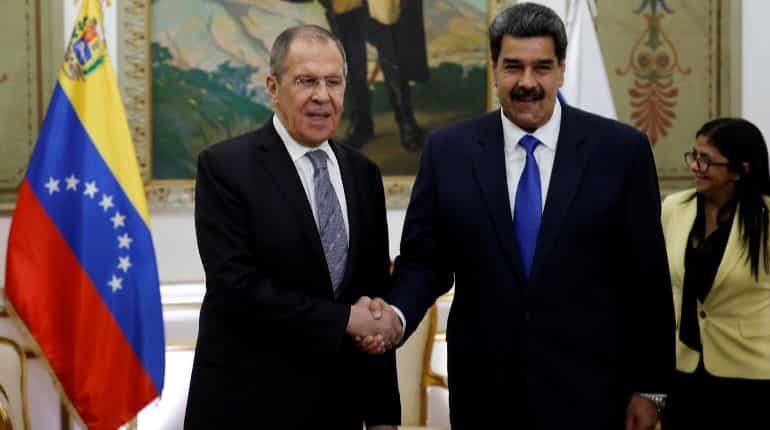 "We have agreed to deepen our economic, commercial and investment cooperation in several areas despite the illegitimate sanctions," Lavrov said alongside Venezuelan Vice President Delcy Rodriguez following an afternoon meeting with Maduro.

"The most promising sectors are energy, natural resources and industry," Lavrov said in comments broadcast on state television, without providing details.

US President Donald Trump met at the White House this week with opposition leader Juan Guaido, who is recognized by more than 50 countries as Venezuela's legitimate president.

Also Read: Venezuela opposition calls on US to step up pressure on Maduro ally Russia

"We consider sanctions to be unacceptable," Lavrov said during an earlier televised meeting with his Venezuelan counterpart, Jorge Arreaza, and other Venezuelan officials. "It is outrageous that unilateral actions by the United States affect social and humanitarian projects."

Lavrov also said "unilateral" actions by Washington could interfere with humanitarian projects. He voiced support for a government-backed dialogue effort as an alternative to "uprisings and interventions."

Opposition leaders have said Maduro uses dialogue proceedings as a stalling tactic. The US Special Representative to Venezuela Elliott Abrams said on Thursday that Russia's support for Maduro's government may "no longer be cost-free."

On Friday, the US Treasury Department said it imposed sanctions on Venezuela state-run airline Conviasa, which it said was being used to "shuttle corrupt officials around the world."

"The Trump administration will not allow Maduro and his proxies to continue stealing from the Venezuelan people and abusing state-owned assets to advance their own corrupt and destabilizing activities," Treasury Secretary Steven Mnuchin said in a statement.

It is not evident that Washington is prepared to impose sanctions on Russian oil companies due to the potential impact on crude markets.