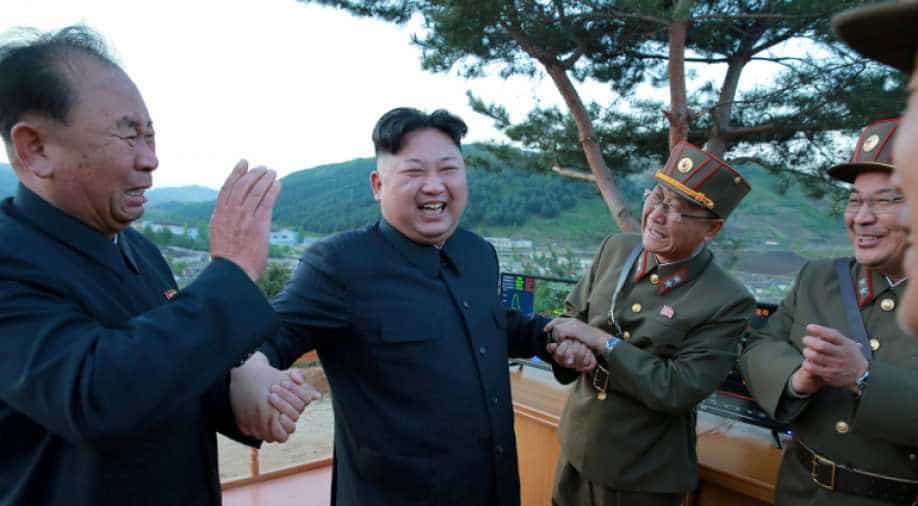 The three, shown with Kim in photographs and TV footage in North Korean media, are of great interest to Western security and intelligence agencies since they are the top people in the secretive country's rapidly accelerating missile programme.

The photographs and TV footage show that the three are clearly Kim's favourites. Their behaviour with him is sharply at variance with the obsequiousness of other senior aides, most of whom bow and hold their hands over their mouths when speaking to the young leader.

Unlike most other officials, two of them have flown with Kim in his private plane Goshawk-1, named after North Korea's national bird, state TV has shown.

With their ruling Workers Party, military and scientific credentials, the trio is indispensable to North Korea's rapidly developing weapons programmes - the isolated nation has conducted two nuclear tests and dozens of missile launches since the beginning of last year, all in violation of UN resolutions.

"Rather than going through bureaucrats, Kim Jong Un is keeping these technocrats right by his side, so that he can contact them directly and urge them to move fast. It reflects his urgency about missile development," said An Chan-il, a former North Korean military officer who has defected to the South and runs a think tank in Seoul.

Kim Jong Sik and Jang are not from elite families, unlike many other senior figures in North Korea's ruling class, North Korean leadership experts say. They said Ri, the former air force commander, has been to one of the better-regarded schools in North Korea, but he and the other two were hand-picked by Kim Jong Un.

"Kim Jong Un is raising a new generation of people separate from his father's key aides," said a South Korean official with knowledge of the matter, referring to Kim Jong Il, who died in late 2011 leaving the younger Kim in charge.

The official requested anonymity due to the sensitivity of the matter.

The most prominent of the three is Ri, according to leadership experts.

Always shown smiling in photographs, he is now deputy director of the Workers' Party Munitions Industry Department, which oversees the development of North Korea's ballistic missile programme, according to the South Korean government and US Treasury.

The department was blacklisted by the US Treasury in 2010 and Ri was named by the South Korean government last year for activities related to the country's weapons programmes.

"The big potato in that trio of people is Ri Pyong Chol," said Michael Madden, an expert on the North Korean leadership. "He's been around since before Kim Jong Un was even talked about with any seriousness".

Born in 1948, Ri was partly educated in Russia and promoted when Kim Jong Un started to rise through the ranks in the late 2000s, Madden and the South Korean government official said.

Ri has visited China once and Russia twice. He met China's defence minister in 2008 as the air force commander and accompanied Kim Jong Il on a visit to a Russian fighter jet factory in 2011, according to state media.

The rocket scientist in the trio is Kim Jong Sik. He started his career as a civilian aeronautics technician, but now wears the uniform of a military general at the Munitions Industry Department, according to experts and the South Korean government.

But it was his role in the North Korea's first successful launch of a rocket in 2012 which really helped him earn recognition, Madden said.

"When that thing went off and entered into a lower earth orbit, he got credit for that," said Madden. "The nuclear and missile guys under Kim Jong Un are getting their jobs based on merit".

Last year, Kim Jong Sik was at the National Aerospace Development Administration or "NADA", North Korea's official space agency, where he escorted Kim Jong Un through the mission control room ahead of a successful long-range rocket launch in February.

State TV footage showed him riding to a launch site in Kim Jong Un's private plane. Upon arrival, he accompanied the young leader down the red carpet and received flowers from other senior officials.

Most other details, including his age, are not known.

Of the three men, the least is known about Jang Chang Ha, president of the Academy of the National Defence Science, previously called the Second Academy of Natural Sciences.

The body is in charge of the secretive country's research and development of its advanced weapons systems, "including missiles and probably nuclear weapons", the US Treasury said in 2010 in its decision to blacklist the group.

The organisation obtains technology, equipment, and information from overseas for use in weapons programmes, the Treasury said. Jang was added to the Treasury blacklist in December 2016.

Under Jang's leadership, the academy has around 15,000 staff, including some 3,000 missile engineers, according to South Korean media reports, citing unnamed sources.

North Korea's banned weapons programme began in the early 2000s with a similar trio of men close to the leadership who specialised in procurement, science and military affairs.

Of them, logistician Jon Pyong Ho has died. The others - scientist So Sang Guk and military coordinator O Kuk Ryol - are elderly and no longer in the public eye.

Their place, Madden said, has been taken by Kim Jong Un's hand-picked men.

"These are the men bringing North Korea's missile programme into the 21st Century." he said.