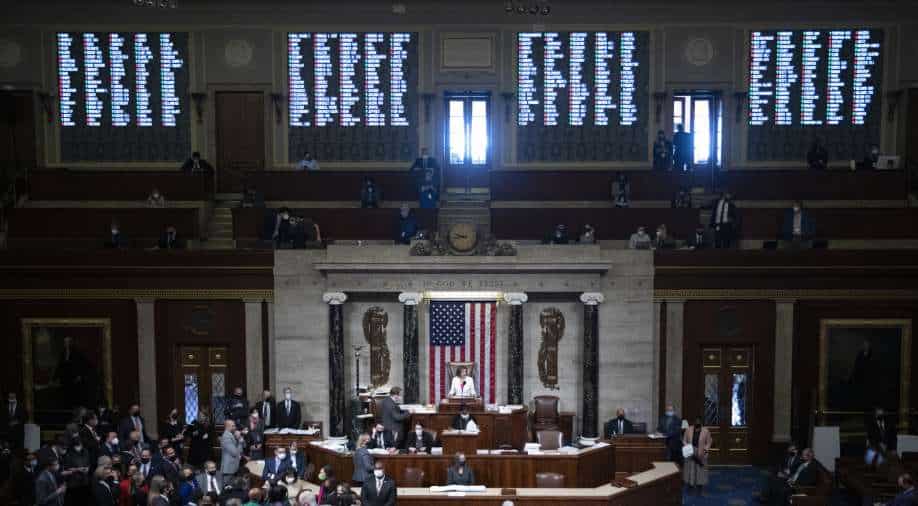 Speaker of the House Nancy Pelosi oversees the vote on Biden’s domestic agenda at the Capitol on Friday Photograph:( The New York Times )

The bill’s passage, 220-213, came after weeks of cajoling, arm-twisting and legislative legerdemain by Democrats

The House on Friday narrowly passed the centerpiece of President Joe Biden’s domestic agenda, approving $2 trillion in spending over the next decade to battle climate change, expand health care and reweave the nation’s social safety net, over the unanimous opposition of Republicans.

The bill’s passage, 220-213, came after weeks of cajoling, arm-twisting and legislative legerdemain by Democrats. It was capped off by an exhausting, circuitous and record-breaking speech of more than eight hours by the House Republican leader, Rep. Kevin McCarthy of California, that pushed a planned Thursday vote past midnight, then delayed it to Friday morning — but did nothing to dent Democratic unity.

Groggy lawmakers reassembled at 8 a.m., three hours after McCarthy finally abandoned the floor, to begin the final series of votes to send one of the most consequential pieces of legislation in half a century to the Senate.

Speaker Nancy Pelosi opened the final push with what she called “a courtesy to” her colleagues: “I will be brief.” She then put the House’s actions in lofty terms.

“Under this dome, for centuries, members of Congress have stood exactly where we stand to pass legislation of extraordinary consequence in our nation’s history and for our nation’s future,” she said, adding, the act “will be the pillar of health and financial security in America.”

The bill still has a long and difficult road ahead. Democratic leaders must coax it through the 50-50 Senate and navigate a tortuous budget process that is almost certain to reshape the measure and force it back to the House — if it passes at all.

But even pared back from the $3.5 trillion plan that Biden originally sought, the legislation could prove as transformative as any since the Great Society and War on Poverty in the 1960s, especially for young families and older Americans. The Congressional Budget Office published an official cost estimate Thursday afternoon that found the package would increase the federal budget deficit by $160 billion over 10 years.

The assessment indicated that the package overall would cost slightly more than Biden’s latest proposal — $2.1 trillion rather than $1.85 trillion.

It offers universal prekindergarten, generous subsidies for child care that extend well into the middle class, expanded financial aid for college, hundreds of billions of dollars in housing support, home and community care for older Americans, a new hearing benefit for Medicare and price controls for prescription drugs.

More than half a trillion dollars would go toward shifting the U.S. economy away from fossil fuels to renewable energy and electric cars, the largest investment ever to slow the warming of the planet. The package would largely be paid for with tax increases on high earners and corporations, estimated to bring in nearly $1.5 trillion over 10 years.

Savings in government spending on prescription drugs were projected to bring in another $260 billion, although a scaled-back measure to allow Medicare to negotiate drug prices for some medications was estimated to save only $79 billion, far less than the Democrats’ original $456 billion proposal would have.

“This bill will be transformational, and it will be measured in the deeper sense of hope that Americans will have when they see their economy working for them instead of holding them back,” Rep. Steny Hoyer, D-Md., the House majority leader, said Thursday during what was supposed to the closing debate.

The fact that the bill could slightly add to the federal deficit did not dissuade House Democrats from proceeding to vote for it, in part because the analysis boiled down to a dispute over a single line item: how much the IRS would collect by cracking down on people and companies that dodge large tax bills.

The budget office predicted that beefing up the IRS with an additional $80 billion of funding would bring in just $127 billion over 10 years on net. That is far less than the $400 billion the White House estimates it would bring in over a decade, both through enforcement actions and by essentially scaring tax cheats into paying what they owe.

The legislation is moving through Congress under special rules known as reconciliation that shield it from a filibuster, allowing Democrats to push it through over unified Republican opposition in the Senate.

It is a key piece of Biden’s domestic policy agenda, paired with a $1 trillion infrastructure package the president signed into law this week. Its path to Friday’s vote was arduous, from midsummer to deep autumn, with negotiations pitting liberal lawmakers against centrists and House Democrats against senators.

Democrats in the Senate and House had hoped to reach agreement on a final bill before either chamber voted, but that plan was ditched weeks ago amid persistent infighting.

And from the beginning, Republicans — who made it clear they could never support a package of the scope and ambition Biden had proposed — were cut out of the reconciliation talks. While some Republicans voted for the infrastructure measure, they unanimously opposed the expansive social safety net package, arguing that it would constitute a “socialist” encroachment of the federal government into every aspect of American life, and would exacerbate rising costs across the country.

McCarthy, the minority leader, took advantage of the House’s so-called “magic minute” — a custom that allows leaders to speak without time constraints when they are granted their minute of floor time.

He held the floor well into Friday morning, railing for more than eight hours against the bill and the Biden administration, breaking the record for the longest consecutive House speech set by Pelosi in 2018 before he concluded at 5:10 a.m. Some Democrats pointedly walked out before he began to speak, and at times interrupted his speech against the bill with boos, heckles and jeers.

“Every page of all this new Washington spending shows just how irresponsible and out of touch the Democrats are to the challenges that America faces today,” McCarthy said during his diatribe, which appeared designed more to rally his Republican base behind a message for the midterm elections in a debate that had been scheduled to last just 20 minutes.

But just hours later, Democrats filed into the chamber, joking about the lack of sleep. And if Democrats feared the political consequences, it was not evident from the final tally, which reflected support among those from the most competitive districts.

The only Democrat who opposed the bill, Rep. Jared Golden of Maine, did so after raising concerns this month about the inclusion of a provision that would generously increase the federal tax deduction for state and local taxes paid, from $10,000 a year to $80,000.

The action — after months of time-consuming maneuvering over the bill — was fueled in part by an eagerness among lawmakers to wrap up their work and leave Washington for their weeklong Thanksgiving recess. It came about eight months after Biden unveiled the first part of his domestic policy agenda, and after several near-death experiences for the package that have exposed deep divisions within his party.

The vote showed remarkable Democratic unity, given the struggle to get to it. A group of moderate and conservative holdouts, wary about the size of the bill, had held out for an official estimate before they would commit to supporting it.

But after the release Thursday of section-by-section assessments from the Congressional Budget Office, the official fiscal scorekeeper, most were swayed. White House officials met privately with the group Thursday evening to walk them through the administration’s analysis and the budget tables, according to a person familiar with the discussion.

“While I continue to have reservations about the overall size of the legislation — and concerns about certain policy provisions that are extraneous or unwise — I believe there are too many badly needed investments in this bill not to advance it in the legislative process,” Rep. Stephanie Murphy, D-Fla., a key centrist, said in a statement announcing her vote.

For Democrats, the bill is perhaps the last significant opportunity to push through their domestic policy ambitions: an array of environmental provisions, federal support for education and child care, and the fulfillment of a longtime campaign promise to tackle the soaring cost of prescription drugs.

“Now, it’s going to be just telling our story — that’s the challenge,” said Rep. Richard E. Neal, D-Mass., the chairman of the House Ways and Means Committee, as staff carried fresh cups of coffee into his ceremonial office. “We’ve got make sure that people understand which party came through, and we really did.”

The legislation is all but guaranteed to change in the Senate, where two Democratic centrists, Sens. Joe Manchin of West Virginia and Kyrsten Sinema of Arizona, have yet to explicitly endorse it. In an evenly divided Senate, a single defection could sink its passage, and Democrats will have to maneuver the bill through their own internal divisions and a rapid-fire series of politically difficult amendments that could upend the bill.

Democrats must also ensure that the entire plan adheres to the strict rules that govern the reconciliation process and force the removal of any provision that does not have a direct fiscal effect. Those rules have already forced the party to abandon a plan to provide a path to citizenship in the bill for immigrants in the country illegally.

The Senate parliamentarian, the arbiter of those rules, has yet to issue guidance for their latest proposal to provide temporary protection from deportation for millions of migrants who are long-term residents of the United States.

Other elements of the plan may also shift because of objections from individual senators. Manchin, in particular, has raised a variety of concerns, including to four weeks of federal paid family and medical leave and a push to include a fee on emissions of methane, a powerful pollutant.

And Sens. Bernie Sanders, I-Vt., who is chairman of the Senate Budget Committee, and Michael Bennet, D-Colo., have rejected a House provision to generously increase the federal tax deduction for state and local taxes paid, which would primarily benefit wealthy homeowners who itemize their deductions. Instead, they and other senators are discussing an income limit to curtail who could take advantage of the increased deduction.

The provision would raise a cap imposed by Republicans in their 2017 tax law, which Democrats from high-tax states like New York, California and New Jersey, have denounced as punitive for their constituents. While some Democrats have publicly complained about its inclusion, several lawmakers in the New York and New Jersey delegations had established it as a requirement for their votes.

Democratic leaders have suggested that the Senate would move to pass the legislation before the end of the year, despite a number of other pressing fiscal deadlines piling up in December.